Working Paper Series no. 683: Perceived FOMC: The Making of Hawks, Doves and Swingers

Narrative records in US newspapers reveal that about 70 percent of Federal Open Market Committee (FOMC) members who served during the last 55 years are perceived to have had persistent policy preferences over time, as either inflation-fighting hawks or growth-promoting doves. The rest are perceived as swingers, switching between types, or remained an unknown quantity to markets. What makes a member a hawk or a dove? What moulds those who change their tune? Michael Bordo and Klodiana Istrefi highlight ideology by education and early life economic experiences of members of the FOMC from 1960s to 2015. This research is based on an original dataset. 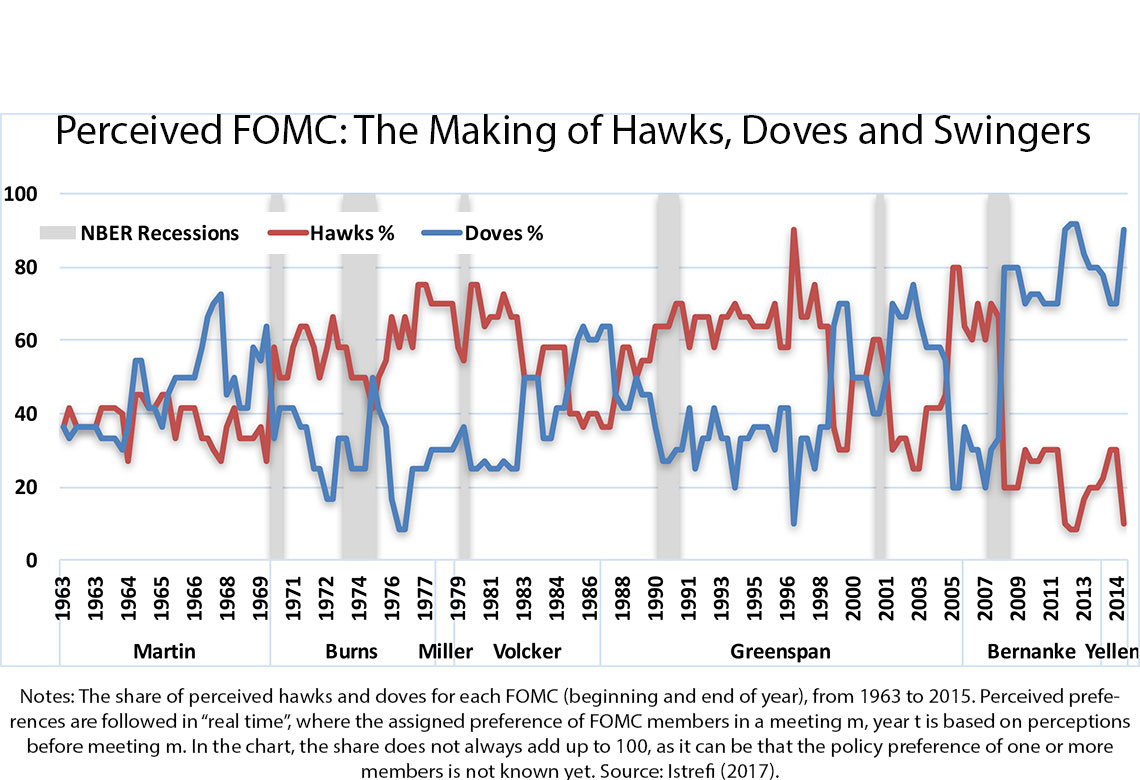 Commentators on monetary policy and market participants often refer to central bankers with labels hawk and dove, where a hawk is thought of assigning a higher priority to fighting inflation and a dove to supporting more output growth and employment. In this paper we ask what moulds the central banker’s type as a hawk or a dove? We investigate this question, highlighting sources of heterogeneity amongst different types of central bankers within a monetary policy committee, focusing on the Federal Open Market Committee (FOMC) of the Federal Reserve. The central banker’s type (which is not observable otherwise) is proxied by a hawk-dove measure of Istrefi (2017) that is built based on narrative records in U.S newspapers regarding the policy leanings of each FOMC member, serving from the early 1960s to 2015. Policy leaning of each FOMC member is checked with respect to the dual objectives of the Federal Reserve: maximum employment and stable prices.

Istrefi (2017) identified three policymaker’s types: all time hawks (39 percent of the sample), all time doves (30 percent) and swingers, those who switched type over their tenure (24 percent). In this paper we investigate the sources of heterogeneity between the three types of central bankers primarily using insights from political science and social psychology, highlighting the formation of core economic and political beliefs during the early stages of life of a person. Based on this literature, we use the historical-economic background when FOMC members grew up and the ideas or ‘theories’ in fashion at places where they studied as source for some clues. In addition, we explore the match of our types with the political or/and institutional philosophies of those who appointed them and also investigate the FOMC years to understand the conditions (either economic or political) under which some FOMC members (swingers) changed their tune. The period under investigation covers 130 FOMC members and comprises the FOMC under seven Federal Reserve chairpersons, from William McChesney Martin to Janet Yellen.

We find that the odds of being a hawk are higher when a member is born during a period of high inflation, graduated from a university linked to the Chicago school of economics (‘freshwater’), and was appointed by a Republican president or by the board of a regional Federal Reserve Bank with established institutional philosophies. A dove is most likely born during a period of high unemployment, like the Great Depression, graduated in a university with strong Keynesian beliefs (‘saltwater’), and was appointed by a Democrat president. Swingers share several background characteristics of the doves, but not always.

In addition we show that, hawks dissent predominantly for tighter policy, doves for looser policy and swingers dissent on both sides. The odds of dissenting for a tighter policy are higher when a member graduated from a university linked to the Chicago school of economics (‘freshwater’). In turn, we observe that FOMC members born during the Great Depression have dissented more on the side of easer policy than FOMC members born before or post Great Depression.