Working Paper Series no. 748: A Plucking Model of Business Cycles

In standard models, economic activity fluctuates symmetrically around a ``natural rate'' and stabilization policies can dampen these fluctuations but do not affect the average level of activity. An alternative view–labeled the ``plucking model'' by Milton Friedman–is that economic fluctuations are drops below the economy's full potential ceiling. If this view is correct, stabilization policy, by dampening these fluctuations, can raise the average level of activity. We show that the dynamics of the unemployment rate in the US display a striking asymmetry that strongly favors the plucking model: increases in unemployment are followed by decreases of similar amplitude, while the amplitude of the increase is not related to the amplitude of the previous decrease. We develop a microfounded plucking model of the business cycle. The source of asymmetry in our model is downward nominal wage rigidity, which we embed in an explicit search model of the labor market. Our search framework implies that downward nominal wage rigidity is consistent with optimizing behavior and equilibrium. In our plucking model, stabilization policy lowers average unemployment and thereby yields sizable welfare gains. 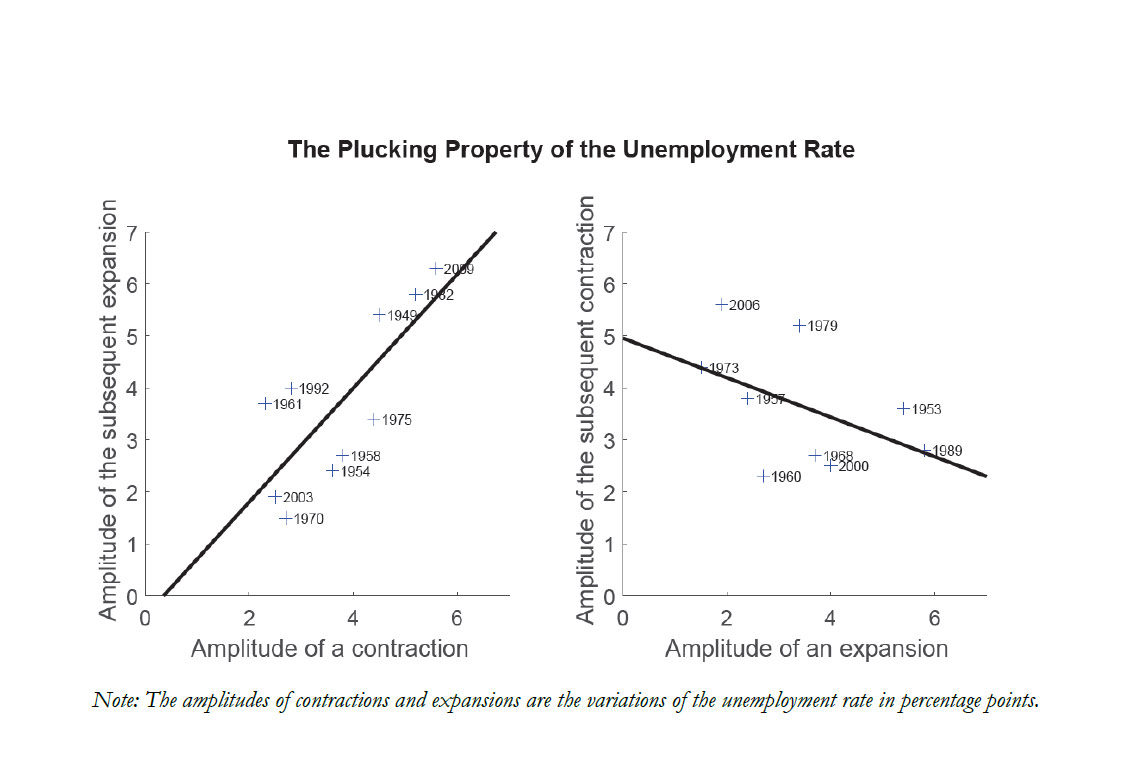 In the workhorse models currently used for most business cycle analysis, economic activity fluctuates symmetrically around a “natural rate” and stabilization policy does not appreciably affect the average level of output or unemployment. At best, stabilization policy can reduce inefficient fluctuations around the natural rate. As a consequence, in these models the welfare gains of stabilization policy are trivial.
An alternative view is that economic contractions involve drops below the economy's full-potential ceiling or maximum level. Milton Friedman proposed a “plucking model” analogy for this view of business cycles: “In this analogy, [...] output is viewed as bumping along the ceiling of maximum feasible output except that every now and then it is plucked down by a cyclical contraction” (Friedman 1964, 1993). In the plucking model view of the world, improved stabilization policy that eliminates or dampens the “plucks”–i.e., contractions–increases the average level of output and decreases the average unemployment rate. Stabilization policy can therefore potentially raise welfare by substantial amounts.
We show that the dynamics of the US unemployment rate strongly favor the plucking model of business cycles. An implication of the plucking model–highlighted by Friedman–is that the dynamics of unemployment should display the following asymmetry: economic contractions are followed by expansions of a similar amplitude–as if the economy is recovering back to its maximum level–while the amplitude of contractions are not related to the previous expansion–each pluck seems to be a new event. We refer to this asymmetry as the plucking property. We present strong evidence that the US unemployment rate displays the plucking property: The increase in unemployment during a contraction forecasts the amplitude of the subsequent expansion one-for-one, while the fall in unemployment during an expansion has no explanatory power for the size of the next contraction.
Our empirical evidence suggests that macroeconomic policy evaluation should be conducted using models that can capture the plucking property. To this end, we consider whether a workhorse search model of the labor market can account for the plucking property we document in the data. We find that the standard version of this model cannot. The aggregate labor-demand schedule of this model features some non-linearity that can generate a modest amount of the plucking property, but much less than in the data.
To match the facts about plucking that we document in the data, we introduce downward nominal wage rigidity into the search model. We show that our search model augmented with downward nominal wage rigidity can quantitatively match the plucking property. Intuitively, our model reproduces the plucking property because good shocks mostly lead to increases in wages, while bad shocks mostly lead to increases in unemployment.
The plucking nature of our model has important normative implications. It implies that fluctuations in unemployment are fluctuations above a resting point of low unemployment, not symmetric fluctuations around a natural rate. As a consequence, a reduction in the volatility of aggregate shocks not only reduces the volatility of the unemployment rate, but also reduces its average level. Eliminating all aggregate shocks in our calibrated model reduces the average unemployment rate from 5.8% to 4.6%