This paper shows that when agents learn from prices, large private uncertainty may result from a small amount of heterogeneity. As in a Phelps-Lucas island model, final producers look at the prices of their local inputs to infer aggregate conditions. However, market linkages between islands make the informativeness of local prices endogenous to general equilibrium relations. In this context, I show that a vanishingly small heterogeneity in local conditions is enough to generate an equilibrium in which prices are rigid to aggregate shocks and transmit only partial information. I use this insight as a microfoundation for price rigidity in an otherwise frictionless monetary model and show that even a tiny amount of dispersion in fundamentals can lead to large non-neutrality of money. 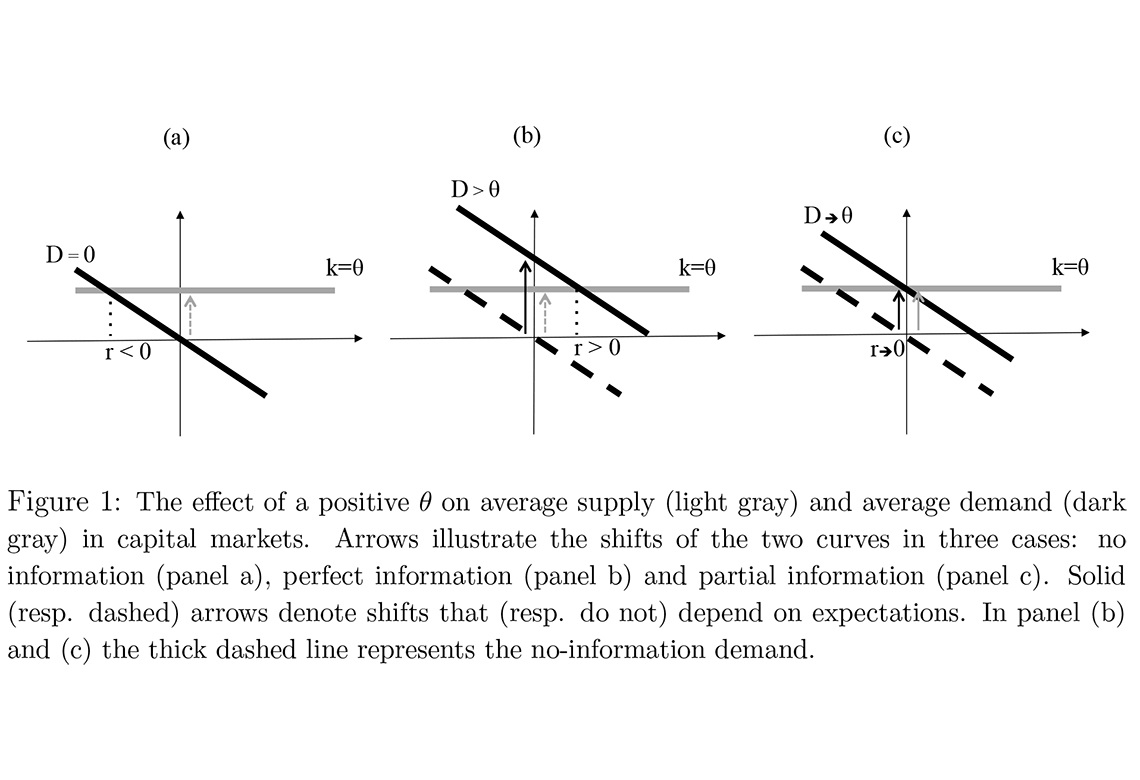 Aggregate price rigidity is an important regularity of business cycles. In particular, the effectiveness of monetary policy relies on the sluggish response of prices to aggregate shocks. Therefore, what determines aggregate price rigidity is one of the crucial questions in Macroeconomics. Robert Lucas Jr. and Edmund Phelps have been the first arguing that delays in the acquisition of information about a change in aggregate conditions may generate aggregate price rigidity. To formalize this idea they created the fiction of an economy segmented in islands. Each producer only sees the local prices of the inputs traded in his own island; for this reason, she gets confused on whether price changes reflect local rather than global fluctuations. Although very influential, one problem with these models is that markets need to be severely fragmented and economic fundamentals be widely dispersed for the model to predict the high level of price rigidity that we observe in data.

This paper demonstrates that the Lucas-Phelps insight is much more robust than before thought. I show that when agents learn from prices, arbitrarily small dispersion in fundamentals may lead to substantial price rigidity. The result is obtained in a typical island economy by allowing for market linkages across islands. In particular, I model local inputs being in turn the output of intermediate local firms competing on a global market for the same common factor.  The price of this global factor determines each local price of inputs jointly with other local disturbances. Thus, how much prices respond to global, rather than local, factors is determined by market forces. As a result, the information revealed by local prices about aggregate conditions can remain very small, even in the limit in which market fundamentals are nearly homogeneous across islands and producers all observe almost the same price.

The figure below illustrates how such equilibria may form in a simple demand-supply graph in the market of local inputs. In the panels below we measure prices and quantities on the x-axis and y-axis respectively; moreover, the grey-horizontal line k denotes a supply schedule, whereas the black-steep line D a demand schedule. Suppose that both demand and supply move upwards in response to information about a positive aggregate shock, namely theta. Consider now that an aggregate shock is known by sellers which shifts supply upwards (dotted gray arrow). In panel (a) I represent a benchmark case in which demand does not move as buyers have no information about theta: in such a case the price of equilibrium r becomes negative for the market to clear a larger supply. In panel (b) I illustrate the case when buyers have full information: demand shifts upward (solid black arrow) and the equilibrium price moves right. In particular when demand moves more than supply than the equilibrium price becomes positive. Under these conditions, an equilibrium as the one plotted in panel (c) may emerge. In such equilibrium, buyers only receive partial information about theta so that demand raises just enough to makes prices remain arbitrarily close to steady state. In this configuration the reaction of prices to the aggregate shock may be so small that any idiosyncratic noise - no matter how small - may make buyers partly informed and so fulfill the equilibrium.

In the paper, I first present a stylized model to discuss the main mechanism. Then I introduce a more standard macro-model to show that the same mechanism can have modern DSGE microfoundations and that previous insights carry over into richer settings.

These results shed new light on the nature of price rigidities. Previous work typically relies on frictions in the availability or use of information about input costs to explain why producers do not readily adjust prices. Calvo pricing (Calvo, 1983), menu costs (Sheshinski and Yoram, 1977), inattentiveness (Reis, 2006) or rational inattention (Wienderholt and Mackowiak, 2009) are a few popular examples of an ever-growing literature. In my model, in contrast, producers perceive their marginal costs precisely and are not constrained in their price setting.