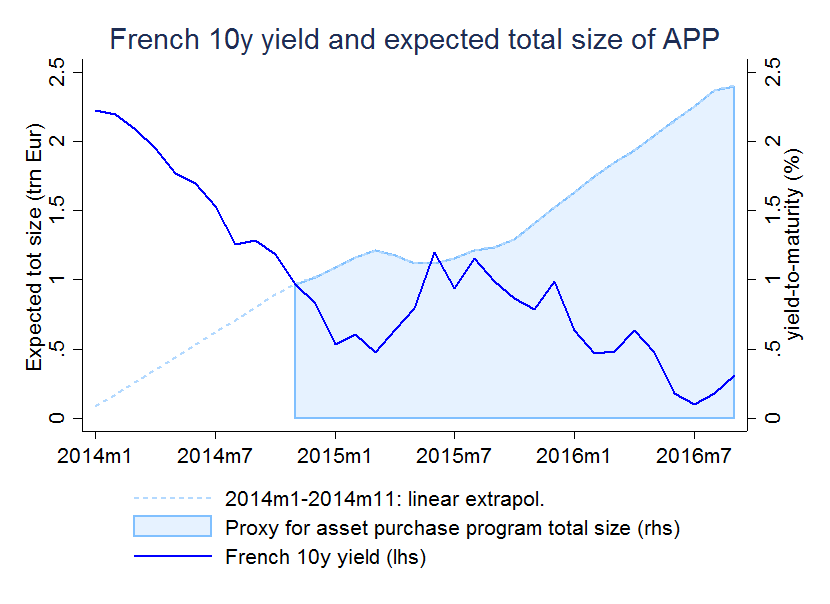 In a context of prolonged low inflation, the Eurosystem engaged in January 2015 in a large scale asset purchase program focused on government bonds (Public Sector Purchase Program, thereafter PSPP), with effective purchases starting in March 2015. The Eurosystem purchases Euro area government, para-public and supranational debt, on top of existing purchases of ABS and covered bonds, at an initial pace of 60 billion euros per month. The program was announced in an open-ended way, initially intended to be carried out until end-September 2016[1] and “until we see a sustained adjustment in the path of inflation” (Jan 2015 ECB Governing Council Press Conference).

This paper brings new evidence on the transmission mechanisms of PSPP purchases based on the first year of implementation, using daily security-level data and PSPP purchase transactions in the French bond market. French government bond market is the second largest in terms of outstanding amounts in the euro area, and presents a diversity of instruments (nominal, inflation linked, local government, public agencies…), fairly representative of the diversity of the European debt.  PSPP purchases are split between each euro area jurisdiction following the capital key – the participation of each national central bank in the ECB capital – and French government bond market is also the second largest market for PSPP purchases.

To our knowledge, this is the first paper exploiting security-level data to analyze PSPP purchase program. Our methodology is similar to the one employed by Federal Reserve’s economists D’Amico and King (2013), and Bank of England’s Joyce et al. (2010), taking advantage of our data both in panel and in cross-section to disentangle the different price impact channels of asset purchases.

More precisely, we test the impact of the Eurosystem's PSPP on bond returns along three ways: the impact of the cumulated past purchases since the start of the program (what literature generally names “stock”: Is cross-section of bond returns affected by the share of supply removed by PSPP?), the price impact of actual transactions the day of the purchase (“flow”: Do bonds over-perform the day they were purchased?), and the variation in the expected total size of the program (“expected stock": do variations in the total expected size of purchases matter?).

We might observe “stock” effects if there is imperfect substitutability across bonds and preferred-habitat type of frictions. Our results support this view. Our findings suggest that the cross-section of bond returns, one year after the beginning of purchases, is significatively affected by the stock of PSPP purchases. The impact is larger for longer maturities and inflation-linked bonds, and in the range of other estimations in the literature. As purchases might be themselves determined with respect to yields, we propose an instrumental variable to correct for the potential endogeneity bias. We take advantage of the program’s rules on the type of bonds that the Eurosystem would avoid in order not to impair market functioning, such as cheapest-to-deliver bonds underlying futures contracts, or bonds that are scarce in the repo market.

A “flow” effect arises when a central bank asset purchase transaction is large enough to create a local distortion in the yield curve that is not fully arbitraged. PSPP as opposed to other QE programs was explicitly intended to minimize “unintended consequences, which can be ensured by obeying the concept of market neutrality. We do want to affect market prices but we will not suppress the price discovery mechanism” (Coeuré, “Embarking on public sector asset purchases” 10 March 2015). Our results point out to almost inexistent flow effect, at least from the French bond market perspective and at the early stage of the program. We supplement this finding by showing how this concept of “market neutrality” is reflected into the PSPP implementation, which appears to be very singular compared with operational implementation of QE by the Federal Reserve or the Bank of England.

Lastly, we look at expected total size of purchases. An episode particularly striking is the European government bonds sell-off that occurred between April and July 2015. During this period, European government bonds yields experienced a rise of about +100 basis points, only two months after the start of purchases. The episode resembles the sell-off of November 2010 in the US on the announcement of QE2; an episode that is explained by Federal Reserve’s officials by markets scaling down their expectations about the total size of QE purchases. To see whether this type of story holds in the Euro area, we extract a proxy of expectations of total size of PSPP from poll data to test whether this is the case. Our results provide new evidence on the importance of the total expected stock of purchases, and show the European bond sell-off is associated with a reduction in the total size of the program expected by market participants.

[1] This was subsequently adjusted to 80 bn Eur/month in March 2016, and ultimately extended until December 2017.