Working Paper Series no. 805: A Prudential trade-off? Leakages and Interactions with Monetary Policy

While monetary and prudential policies are generally analysed separately, this paper focuses on how the two interact. Taking an international perspective, we show that monetary policy in a centre economy (Euro Area) spill over its borders through bank lending – therefore inducing volatility in cross-border lending flows. Investigating a sample of 30 advanced and emerging economies, we find evidence that prudential policy in the receiving-country interact with monetary policy so that a tighter prudential stance in the recipient-country mitigates the volatility of banking flows induced by monetary policy abroad. But we also show that a tighter prudential stance – interactions apart – implies a higher growth of cross-border lending. Taken together, these results might suggest a trade-off: while a tighter prudential stance reduces the volatility of cross-border lending flows, it also implies that local borrowers resort more to lending from abroad. Taking advantage of the granularity of our confidential dataset, we finally explore heterogeneities and show that such leakages arise only for financially more open economies and only through the financial sector, with evidence that such leakages are driven by intra-group lending. 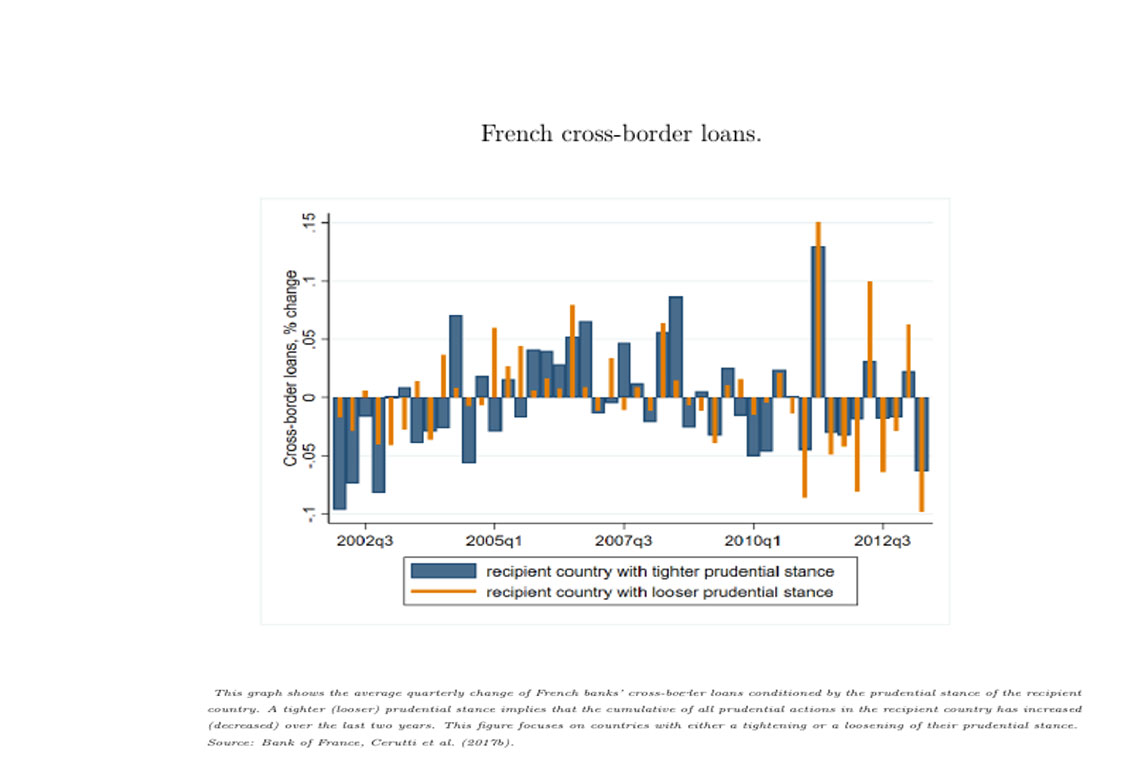 Taking advantage of an untapped and highly granular dataset, this paper focuses on interactions at international level between monetary policy in a centre economy (Euro Area) and prudential policies in the recipient countries of monetary spillovers (our sample includes 30 advanced and emerging economies). The question of interest relates to whether prudential policy in a recipient country introduces prudential leakages and can dampen the inward monetary spillovers from France. On the one hand, cross-border bank lending has been identified as a key transmission mechanism for such spillovers. In the other hand, prudential policy has been extensively used notably in emerging economies, suggesting that prudential instruments might influence monetary transmission as the two policies run through the same transmission channels.

Figure 1 depicts changes of French bank's cross-border loans conditioned by the prudential stance of the recipient country. In general, the variations in cross-border lending go in the same direction. However, the magnitude of these variations appear to be smaller for countries with tighter prudential policies – more clearly at the end of the period. Because all banks are subject to Euro Area monetary policy shocks, the heterogeneity in cross-border loans suggests that prudential policy in the recipient country can be a determinant of monetary policy spillovers. This focus on cross-border interactions is justified by the fact that : (i) given their high degree of internationalization, French banks are likely to pass on monetary shocks abroad, and (ii) foreign economies, in particular emerging markets, have made an intensive use of prudential instruments whereas there has been little variation in French prudential stance.

Our results confirm an empirical evidence of interactions: a tighter prudential stance in a recipient country limits the volatility of cross-border lending induced by unexpected monetary shocks in the Euro Area. It suggests that prudential instruments are effective in shielding the domestic lending cycle from monetary shocks abroad. However – leaving apart the interactions with monetary policy – we also shed light on prudential leakages as a prudential tightening leads to higher inward cross-border lending. This latter finding is in line with previous empirical studies which show evidence that the effect of a prudential tightening can be partially offset by domestic borrowers resorting more to loans from abroad. Taken together, these results suggest a trade-off vis-a-vis external lending: while a tighter prudential stance limits its volatility on the one hand, it encourages borrowers to resort more on it on the other hand.

Finally, drawing on the granularity of our dataset, we explore heterogeneities both at the country and at the bank level. We find that prudential leakages are significant only for the more financially open countries. We also show that leakages do not occur directly through cross-border lending to final consumers (non-financial firms and households) but indirectly through financial institutions in the destination country. Finally, we provide evidence that such leakages are driven by intra-group lending, meaning that French banks transfer funds to their local branches network. This may be motivated by the intention to gain market share over national banks that are subject to regulation.