Banque de France Bulletin no. 233: Article 4 Public and private French debt securities are among the most held by non-residents

French debt is highly international, as it accounts for 8% of the liabilities recorded in the world’s external positions, i.e. the second most held by non-residents, still far behind the United States. Between 2008 and 2019, France’s share of total recorded global liabilities, including intra-euro area liabilities, remained more or less stable (between 8.7% at end-2008 and 8.2% at end-2019), unlike Germany and the United Kingdom, whose shares fell from 10.5% and 9.4% respectively at end-2008 to 6.0% and 7.5% at end-2019. 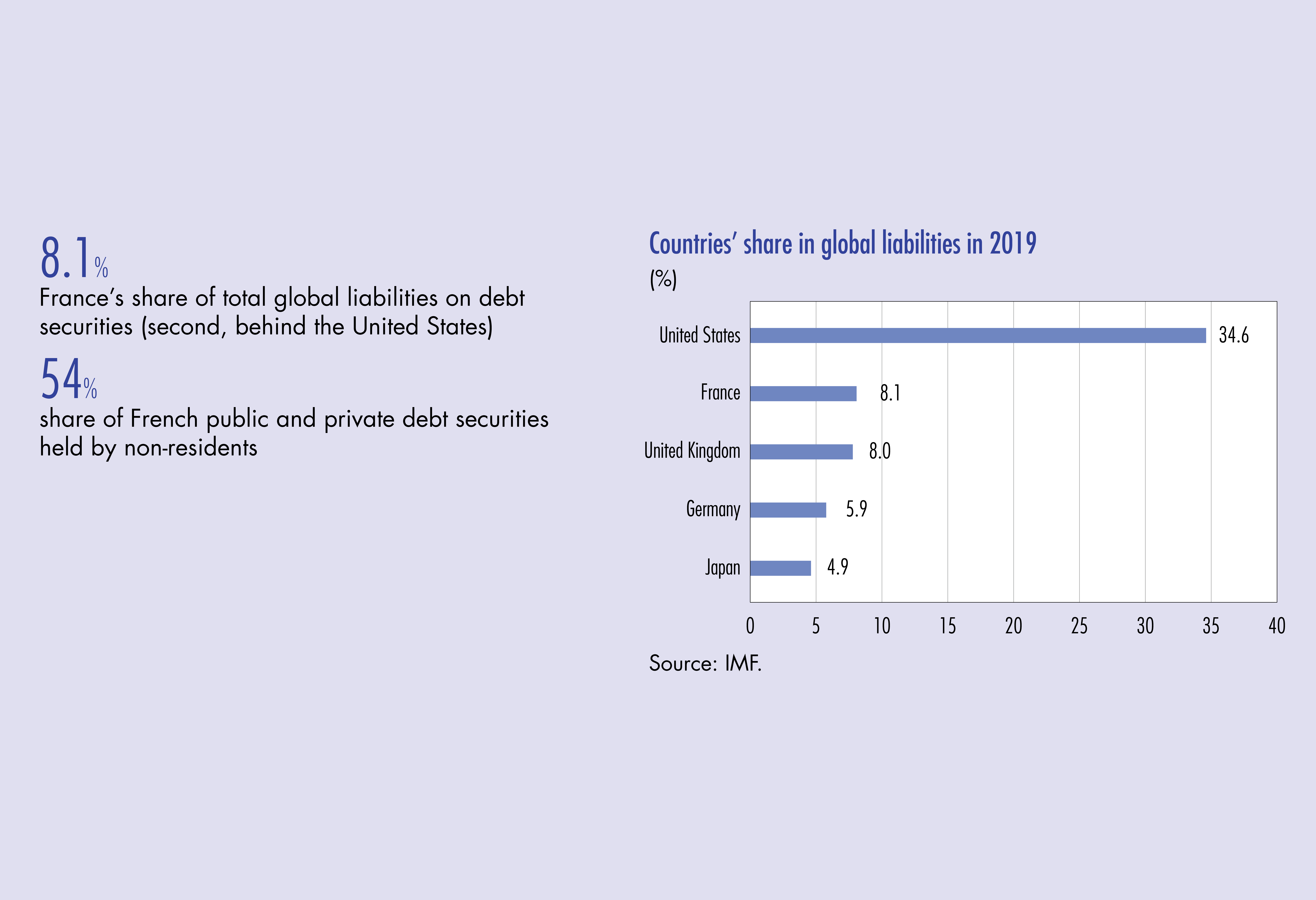 France is one of the world’s largest issuers

France’s share of world debt is higher than its share of world GDP in value. The other major issuing countries share this characteristic, with the exception of China. The largest gap is observed for the United States.

Among the 18 countries whose liabilities represent more than 1% of the world total, 9 are euro area countries. The sum of the liabilities of the euro area Member States (34% of total international liabilities at the end of 2019) is indeed close to the share of the United States (35%).

However, almost half of the euro area’s liabilities are actually held by other Member States. This average proportion reflects very different situations depending on the issuing Member States. For example, German and French debt is mostly held by non-euro area residents, while almost two-thirds of the debt issued by Italy and Spain is held by euro area investors.

Portfolio transactions between euro area countries thus take place within the same monetary area. At the global level, there are therefore grounds for not taking these operations into account, especially because they include monetary policy operations. This lowers France’s world ranking in terms of liabilities. It is nonetheless significant and ranks fourth, after the United Kingdom and Japan, but only by a small margin for the latter. On the other hand, France is ahead of Germany. The weight of the United States in global liabilities stands out even more clearly.

publication
Banque de France Bulletin no. 233: Public and private French debt securities are among the most held by non-residents
Download (EN)

Article 1 : The financial health of VSEs-SMEs: an essential determinant of their credit access
Article 3 : The financial position of French companies: strengths and weaknesses on the eve of the pandemic
Article 4 : Public and private French debt securities are among the most held by non-residents