Working Paper Series no. 707: On the Retirement Effect of Inheritance: Heterogeneity and the Role of Risk Aversion

This paper provides new insights on the effect of inheritance receipt on retirement. We build on lifelong information on inheritances received and labor market transitions available for respondents of the French Wealth Survey. This feature allows us to compare current retirement rates among current and future inheritors. Chances of current retirement are 40% higher among current inheritors than among individuals who will inherit in the next two years, but there is substantial heterogeneity in this effect across socio-demographic groups. For instance, the effect turns out to be stronger effects for part-time workers and for individuals who are neither white collar workers nor executives. The effect is also stronger for individuals with a higher risk aversion, which we interpret with a simple theoretical model. 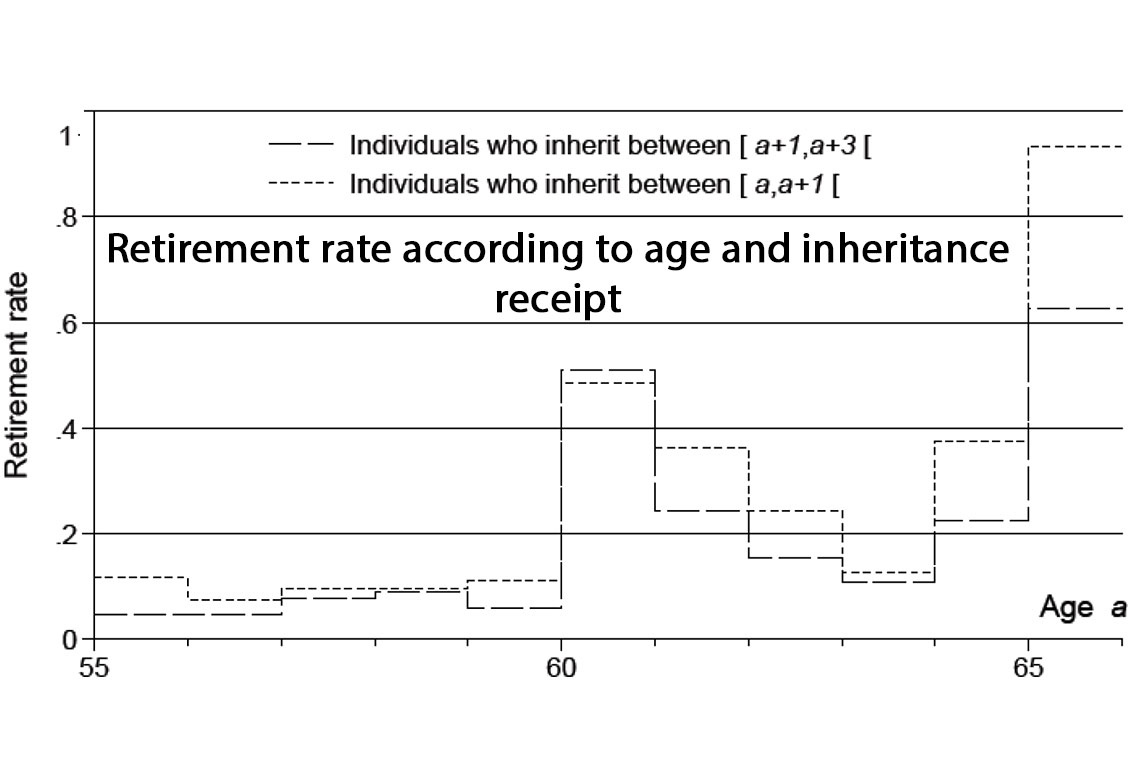 We analyze the retirement effect of private wealth by exploiting the receipt of an inheritance as a wealth shock. We find that, for any age between 55 and 65, chances of current labor market exit are about 40% higher among individuals who inherit at that age than among individuals who inherit in the next few years (Figure 1), consistent with a substantial impact of private wealth on retirement decisions.

Finally, we interpret our results using a simple model of retirement choice in which risk-averse agents receive an inheritance, but are uncertain about when and how much they will inherit. This model allows us to explore the respective roles of risk aversion and credit constraints in explaining our results. We show that, when agents are risk averse, or when credit constraints are binding for them, they will bring forward the date of their retirement after receiving an inheritance, even when they receive exactly the amount they expected. We show that this effect can be all the more important as individuals are risk averse, but that this depends on whether credit constraints are binding. Using several measures of risk aversion, we are able to confront this model to the data. Consistent with the model's predictions, we find that the probability of instantaneous labor force exit following the receipt of an inheritance is increasing in individuals' risk aversion. This is consistent with the idea that pension risk may be an important determinant of retirement age.

publication
Working Paper Series no. 707: On the Retirement Effect of Inheritance: Heterogeneity and the Role of Risk Aversion
Download (EN)