Working Paper Series no. 711: Rising inequalities in access to home ownership among young households in France, 1973-2013

Amongst young households (ages 25 to 44), inequalities in first-time home-ownership and in the amount of acquired real estate assets have increased between the most modest and the most affluent groups over the past forty years. According to Insee’s Housing surveys, 32% of young low-income households were homeowners in 1973, as compared to only 16% in 2013. Beyond the role of macroeconomic and institutional factors (real estate prices, interest rates, term of loans granted, etc.), a decomposition of changes in ownership rates over the period using the “Oaxaca-Blinder” method highlights the role of changes in family structures (increasing proportion of single-parent families, decline in the share of couples with children in the most modest households) and the sharp decline in small rural home ownership. Family support – gift assistance, inheritance and other forms of aid – also played an important part in the 2000s: four out of ten recent homeowners benefited from it, two out of ten even receiving direct financial assistance for their purchase. This support increased significantly among wealthier households during the 2000s, contributing to a widening gap with the share of homeowners in the least well off populations. 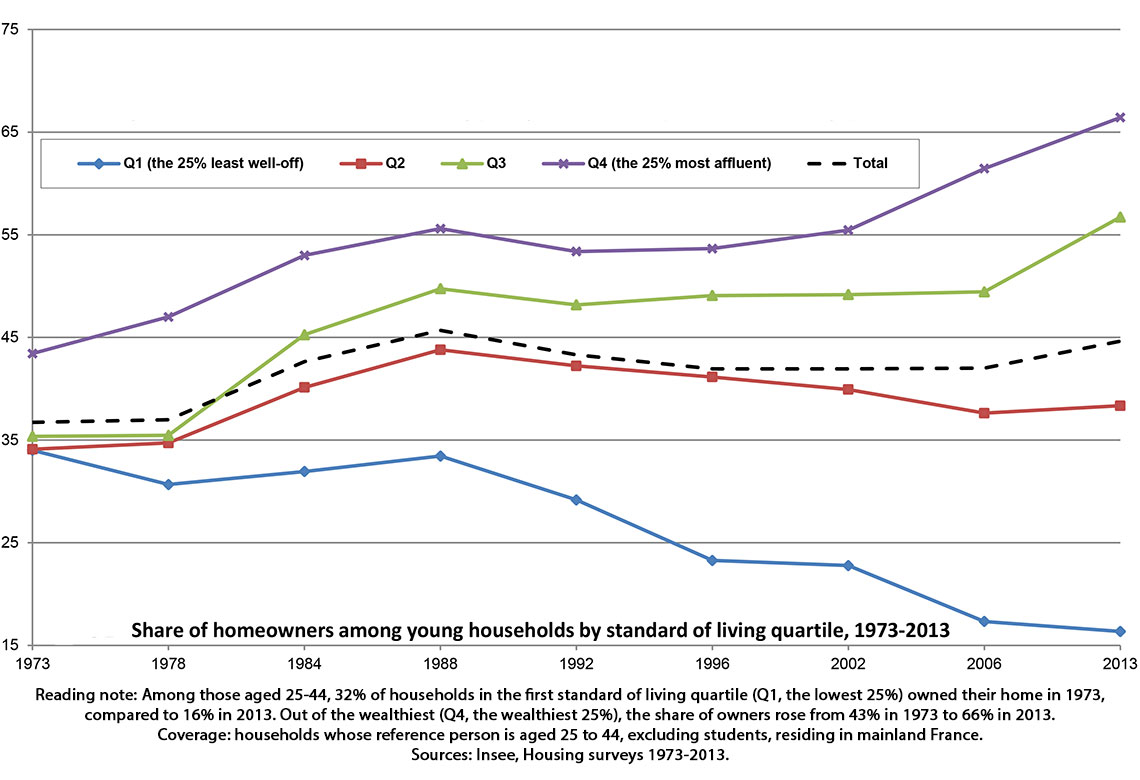 The apparent stability of home ownership among young households aged 25 to 44 between 1973 and 2013 masks growing disparities between the best and the least well‑off.

Over the past 40 years, the lowest-earning households aged between 25 and 44 have experienced a considerable decline in their ability to get on to the property ladder (Graph). In 1973, 34% of households in this category owned their home. Yet by 2013, this proportion had more than halved, to 16%. In contrast, the percentage of well-off young households owning property increased by more than 50% over the period, from 43% to 66%.

Several factors have influenced this dynamic. The decline in the likelihood of low-income young households becoming homeowners between 1978 and 2013 can largely be explained by demographic changes in this segment.

First, the composition of low-income families has changed considerably, with a threefold rise in the share of single-parent households over the period, from 9% to 29%. Conversely, the share of couples with children has dropped sharply. In 1973 they accounted for 78%, while by 2013 this proportion had plummeted to 38%. Given that couples with children are more likely than average to purchase property – unlike single-parent families – this trend explains a large part of the fall in homeownership among the poorest households. In addition, the share of young low-income households living in rural areas has declined considerably. Moreover, the share of young households on low incomes living in the countryside has more than halved, from 31% to 15%, as people have migrated increasingly to larger cities, notably Paris, in line with shifts in the labour market. The sharp decline in small rural property has also contributed to the decline in the rate of the most modest owners.

Gifts and bequests received from family have also played an important role in this unequal trend. The share of young households assisted by their families increased during the 2000s. 20% of the first recent homeowners aged 25 to 44 are concerned in 2002. They are 27% in 2013. Although property prices almost doubled in the 2000s, the share accounted for by bequest in the purchase price of housing remains fairly stable over the period. This relative stability in a context of property price growth may cover different mechanisms. Some families may have adapted their assistance to rising property prices, households may have bought cheaper (possibly lower quality) goods or, finally, some households may have been forced out of the market, not benefiting from sufficient family assistance to acquire housing.

The probability for modest households renting their home and not having received gift assistance, of buying their first main place of residence is 4%. This probability rises to 28% for those who received gift assistance. The gap is also large for other households: the probability of owning a home is more than twice as high for the wealthiest who receive assistance. It is the wealthiest who most often receive donations: almost a quarter (compared to 16% for the poorest) say they received direct assistance at the time of purchase.

Lastly, since the early 2000s, changes in the frequency of donations widened the gap between the most modest and the most affluent. Low-income young households received slightly less support (8% in 2002 compared to 7% in 2013) and became homeowners less often, probably because the amounts of aid received were unable to offset the rise in real estate prices over this period. Meanwhile, the change in the role of gift assistance and inheritance for the wealthiest households is diametrically opposite and seems to be the most spectacular. Between 2002 and 2013, the share of wealthy young households assisted by their families rose from 20% to 24%, an increase of 20%. As a result, their probability of home ownership increased by 9 percentage points (from 57% to 66%), from which 13% is explained by the growing role played by these aids. For these households, however, some of the changes remain unexplained by the variables under consideration; this may reflect the effects of economic conditions, changes in the purchasing behaviour of the better off

This historical perspective highlights a growing difficulty in accessing home ownership among the poorest young households. It reinforces the need for a reassessment of public housing policies and better targeting towards this population whose situation has deteriorated over the past 40 years.