This paper assesses the effectiveness of risk sharing mechanisms in Europe by breaking down the factor income components into their sub-components, and aims to further examine whether financial integration and international portfolio diversification boosts or dampens risk sharing. Using a panel of European countries, we compare the years before and after the 2008 financial crisis. We extend the literature by properly taking into account the heterogeneity (in both country and time dimensions) in the panel through new econometric models. Our results show that financial income has become a major channel of risk sharing in recent years and that a higher integration in the bond and equity markets significantly improves risk sharing in the long term. 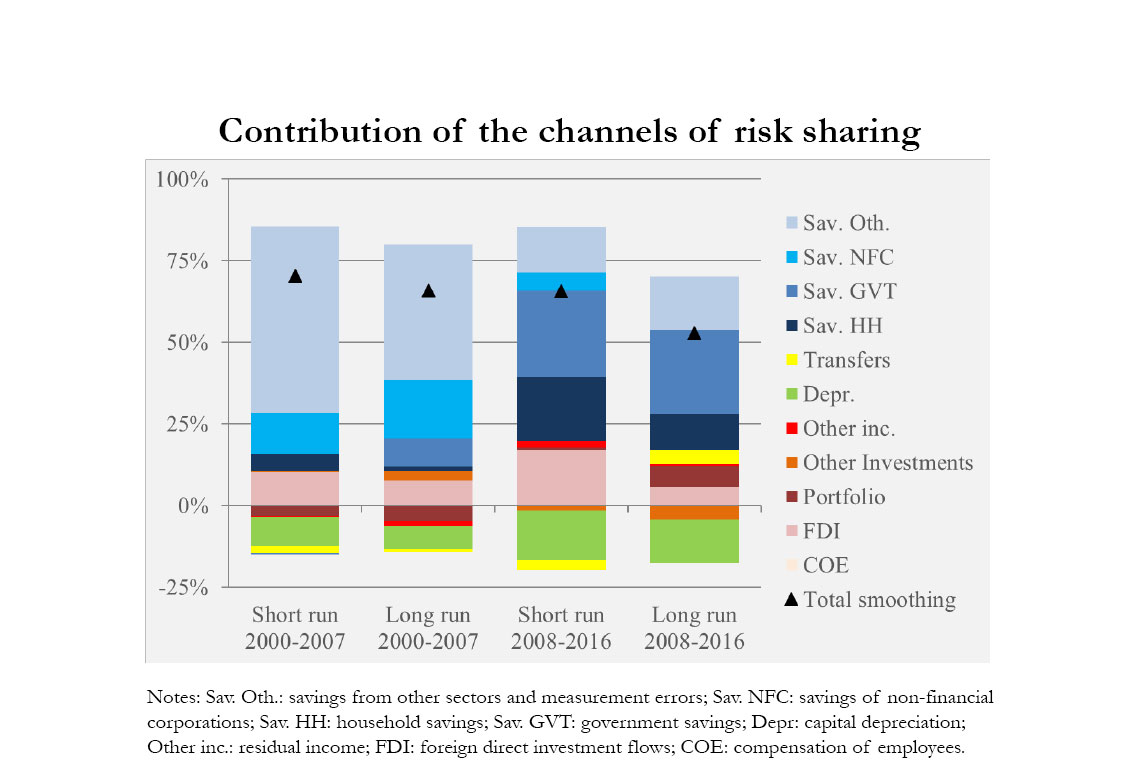 Since the 2010 debt crisis in Europe, a consensus has emerged to develop stabilisation mechanisms within the euro area to improve its ability to absorb asymmetric shocks. Two main channels are currently studied. The first channel relies on private sector cross-border investments, with the objective of improving risk sharing. In particular, the current initiatives to develop the Capital Markets Union in order to ease cross-border investments in bonds and equity could help strengthen risk sharing via foreign financial incomes. The second adjustment channel is related to the creation of public stabilisation tools such as a common budget or a European Unemployment Stabilization Fund.
This paper proposes to estimate the degree of risk sharing in Europe using a new methodology. We break down factor income flows into their sub-components in order to analyse the effect of diversified financial ownership through portfolio income flows, foreign direct investments, other investment income and other primary income. Based on this finer disaggregation of the usual channels, we find new empirical evidence of risk sharing in Europe and learn about the institutional sectors that bear the adjustment of negative shocks.
We enrich the current approaches by accounting for possible heterogeneous effects across countries and years to avoid biased estimations, as this aspect is overlooked in the bulk of the literature. We assume that the reaction of consumption to common shocks can be heterogeneous, at least because European countries have heterogeneous economic structures. Moreover, we use quarterly data, the highest available frequency, which are well suited to potentially volatile financial flows in the balance of payment and to the risks related to capital markets. Our model also reflects the fact that GDP shocks are likely to be persistent over time, hampering the absorption of idiosyncratic income shocks over time. We therefore estimate error-correction models of risk sharing and show that the absorption channels can be different in the short and long term.
We find that, in Europe, savings is a major smoothing channel of the idiosyncratic shocks to GDP. Until 2008, non-financial corporations played a major role by adjusting their savings in response to GDP fluctuations. Since then, cross-border consumption smoothing has mostly occurred through variations in household and government savings. Although the channel related to international factor income can sometimes be destabilizing, we find that capital income has mostly contributed to stabilising consumption following shocks to GDP. The role of FDI income is particularly strong and portfolio income has become the main stabiliser in the long term after 2008. Furthermore, estimates show that higher integration of bond and equity markets should contribute to improving risk sharing in Europe.
Finally, we show that ignoring the heterogeneity of reactions to common shocks and not distinguishing between short-term and long-term effects can substantially affect the estimates of the degree of risk sharing. Consequently, we provide new and more robust evidence that further financial integration should contribute to improving the shock adjustment capacity in Europe via capital income.