Share buybacks have become common practice across U.S corporations. This paper shows that firms finance these operations mostly through newly issued corporate bonds, and that the exogenous variation in the cost of debt -due to innovations in monetary policy- is key in explaining managers' incentives to repurchase their own shares. Under our identification strategy, we find that firms are more likely to repurchase in periods of accommodative monetary policy when the yield on bond adjusts in the same direction. This behavior has macroeconomic implications as it diverts resources from investment and employment, thus reducing the transmission of accommodative monetary policy at firm-level. 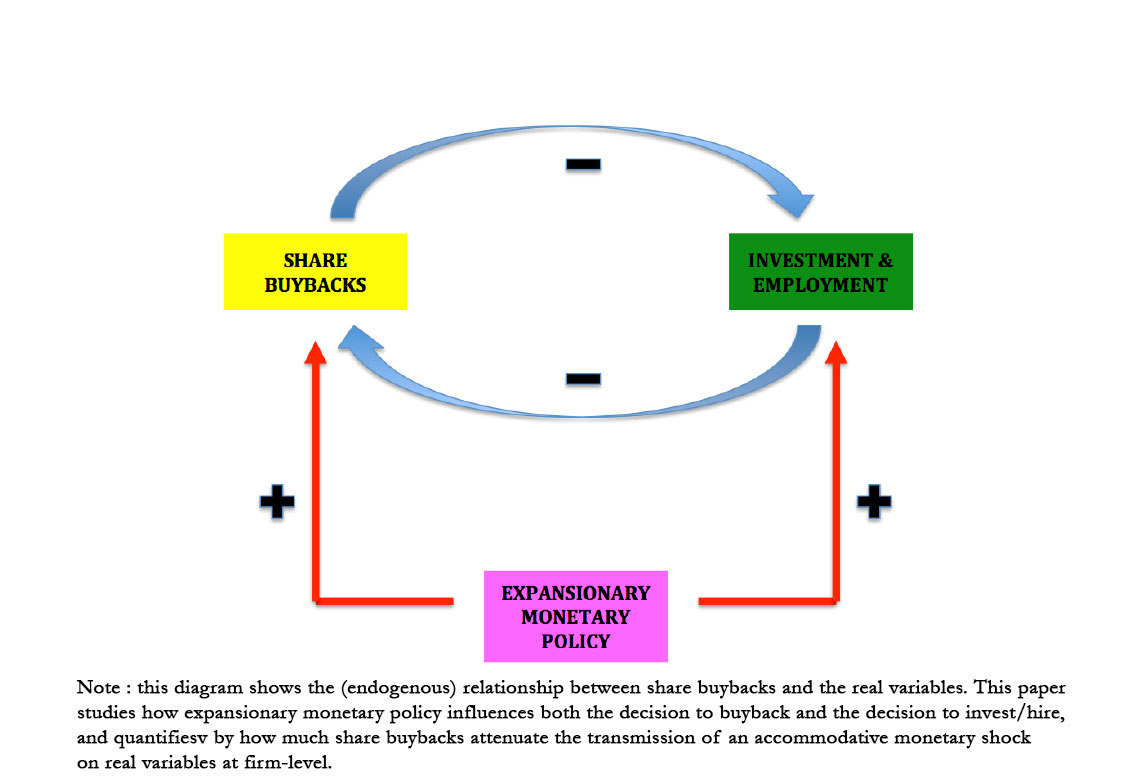 Since 1985, U.S corporations are allowed to buy back their own shares on the stock market. Very quickly buybacks have become common practice used to return cash to particular categories of investors, to send signals of confidence to markets, to concentrate firm's ownership or also to adjust stock prices. However, these operations tend to divert resources from productive investments such that many raised concerns on the legitimacy of repurchase programs, particularly on the way managers use their financial resources and on the overall impact of buybacks on the real economy. These arguments became of interest to legislators and economists in the aftermath of the Great Recession, a period in which firms -despite having at their disposal substantial internal and external liquidity- devoted massive resources to share buyback programs rather than to new investments and job openings.
In light of these facts, this paper investigates firts how firms finance share repurchases and to what extent the cost of financing affects managers' decision to buyback their own shares. We find that buyback programs are mostly financed through new corporate debt issuance and that managers are extremely sensitive to variation in the cost of debt when deciding the timing and the size of a repurchase program. This evidence allows us to relate repurchase behaviour directly to monetary policy and to study if the two interact, and whether these purely coporate-finance operations reduce the pass-through of monetary policy shocks onto real variables at firm-level. We claim that this is indeed the case. In fact, we find that buybacks are most likely and bigger in periods of accommodative monetary policy, i.e. when the cost of debt is low. In partiuclar, for an exogenous fall in the Fed fund rate, firms who benefit from a downward adjustment of their corporate yield tend to repurchase more by issuing more debt in the same quarter. Using low-cost debt to finance repurchases takes away resources from capital expenditures and new employment, thus reducing the effectiveness of accommodative monetary policy at firm-level. For example, firms befitting from a  1% fall in the corporate cost of debt -due to a accommodative monetary shock- repurchase 0.44% of their assets. However, for every million of assets, the same firms invest 11.200 dollars less and hire 0.10 workers less than those firms that do not conduct any repurchase in the same period of monetary accommodation.
Therefore, we conclude that buybacks do attenuate the transmission of expansionary monetary policy and, if the repurchase channel was muted, the transmission of a 1%  accommodative shock on investments and employment would be respectively 11% and 14% stronger.