The liquidity of financial system plays a central role in systemic crises. In this paper, we show that the ECB haircut policies provided an important liquidity support to distressed financial institutions during the euro area sovereign debt turmoil. Using novel, micro data on the pool of collateral eligible to ECB open market operations, we construct a “public” liquidity mismatch indicator (LMI) for the French aggregate banking sector based on the ECB haircuts. We then compare it to the “private” LMI based on the haircuts in private repo markets in a spirit of Bai et al. (2018). The difference between the two indicators represents a new measure of the ECB liquidity support. Our results suggest that the ECB haircut policies have indeed helped French banks to reduce the liquidity mismatch. 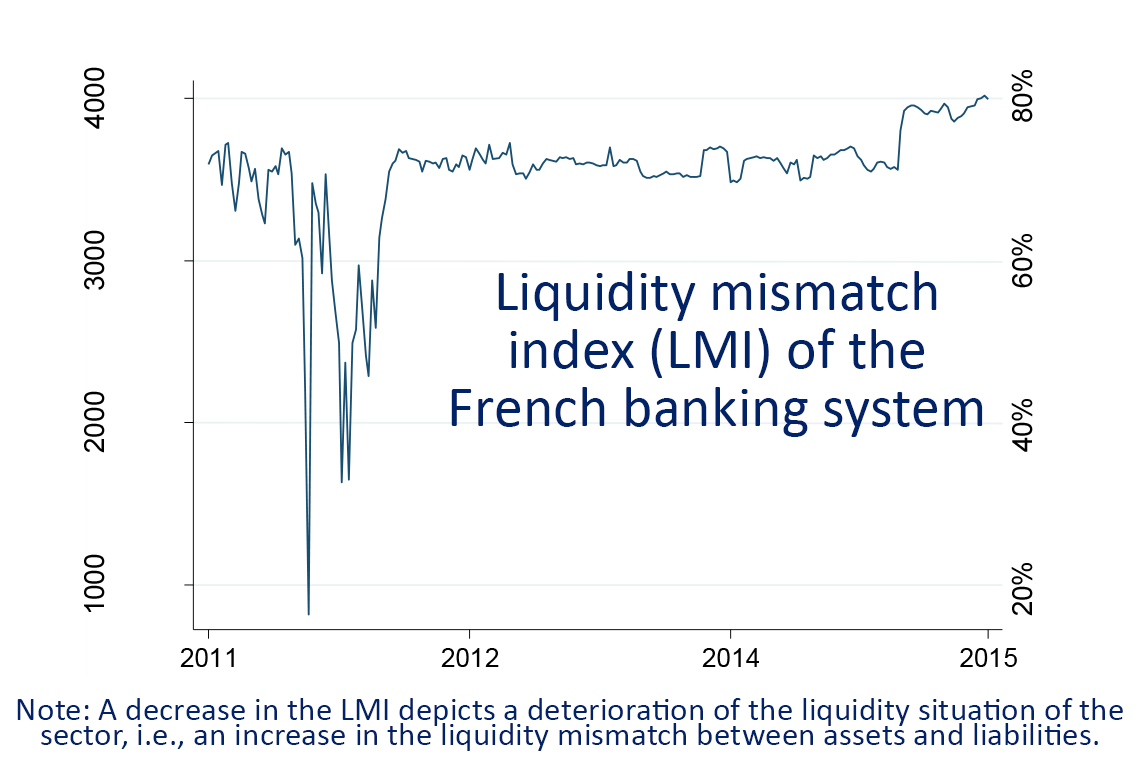 During the recent financial crisis the central banks implemented several measures to ease money market tensions and improve interbank liquidity conditions. In this paper, we look beyond the much researched impact of monetary policy on market-wide liquidity and concentrate on liquidity within banks’ balance sheets. Using novel, micro data on the pool of eligible collateral in the ECB open market operations (OMO), we construct a “public” liquidity mismatch index (LMI) for the French banking sector. The novelty of our approach consists in accounting for the ECB’s influence on bank liquidity and in particular in considering the effects of the ECB collateral and haircut policies.

LMI evaluates the mismatch between the market liquidity of assets and the funding liquidity of liabilities. More specifically, on the asset side we assume that in case of liquidity stress the bank reacts by maximizing the liquidity it can raise from its assets by pledging it as collateral at the OMO operations. The ECB haircuts define the amount of cash the bank can raise using its securities and loans as collateral. On the liability side, we assume that all of bank’s creditors extract the maximum liquidity allowed under the terms of their contract as in Bai et al. (2018). The LMI is the difference between the asset-side liquidity and the liability-side liquidity. As both parts are expressed in terms of euros, it gives the “cash equivalent value” of a bank in a spirit of Brunnermeier et al. (2011).

The use of the ECB haircuts is an important difference with respect to Bai et al. (2018) who measure the liquidity mismatch of the US banking sector using private markets haircuts. We argue that the ECB haircuts are often smaller than these applied by the private repo market which gives the banks incentives to use their assets as collateral at OMO rather than in the private repo markets.