In response to the economic impact of the Covid-19 crisis, the European Commission temporarily relaxed the framework governing the use of State aid. This framework was amended to include more diversified forms of aid, higher ceilings and extended timeframes for granting aid. As evidenced by the widespread implementation of support measures, in particular for the sectors most affected by the crisis, these adjustments were necessary to address the emergency and limit the economic shock. However, the massive and heterogeneous use of public support could, if prolonged beyond what is necessary, distort competition in the internal market and weigh on Member States’ public debt, to the detriment of the European Union’s long-term green and digital objectives. The exit from the emergency aid schemes therefore needs to be prepared. 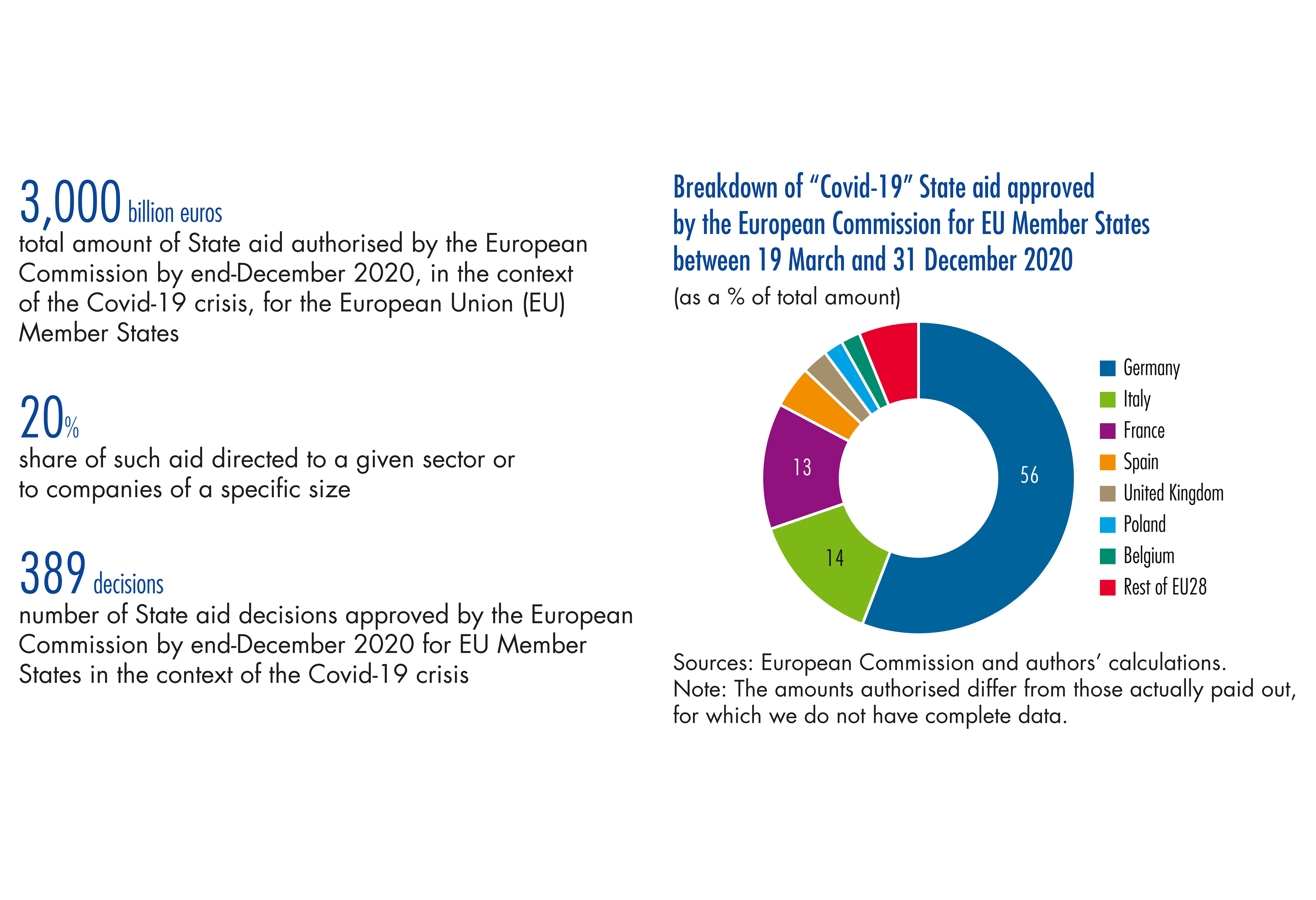 European law prohibits State aid, beyond specific exceptions, because it is considered contrary to the rules of the internal market.

According to the Court of Justice of the European Union (CJEU), “in order to determine whether a State measure constitutes aid, it is necessary to establish whether the recipient undertaking receives an economic advantage which it would not have obtained under normal market conditions”. Thus, State aid is public aid that confers a selective advantage onto the company concerned, affecting both competition and intra‑EU trade (Ministry of the Economy and Finance, 2016a); it is therefore not neutral for the functioning of the internal market.

However, article 107 of the Treaty on the Functioning of the European Union (TFEU) provides for cases, compatible with the Covid‑19 crisis, where State aid may be granted under certain conditions to companies in order to support their economy. Article 107 § 2b of the TFEU authorises aid that aims at remedying damage caused by “extraordinary circumstances” and Article 107 § 3b authorises aid related to “serious disturbances in the economy of a Member State”. The 2008 financial crisis (Ministry of the Economy and Finance, 2016b) and natural disasters, such as the earthquake that struck several regions of Italy in 2016, fall within this framework.

The amplification of the Covid‑19 crisis, which hit the European economy in the beginning of spring 2020, thus justified the use of these State aid measures (see Chart 1). EU GDP fell by 3.2% between the fourth quarter of 2019 and the first quarter of 2020, and by 11.1% between the first and second quarters of 2020 (GDP in volume, seasonally adjusted). This fall primarily concerned Spain (where GDP dropped by 5.4% and 17.8% respectively) and France (where it declined by 5.8% and 13.6%).

Measures based on the experience of the 2008 financial crisis

As early as March 2020, when the pandemic spread across the European continent, the European Commission proposed, as it did during the 2008 financial crisis, a temporary framework on the basis of the TFEU specifying the conditions to be met by State aid schemes in the context of the crisis. …