We study government spending multipliers of the UK economy using a time-varying parameter factor augmented vector autoregressive model (TVP-FAVAR) over the period 1966:Q1-2015:Q4. We show that government spending multipliers vary over time and that most of the variation is cyclical: multipliers for GDP are typically above one in recessions and below one in expansions. Regarding the drivers of the cyclical variation, our results are consistent with theories emphasizing the role of financial frictions and economic slack. We find no evidence that multipliers are larger at the zero lower bound. Structural factors seem to play a lesser role and multipliers do not exhibit a clear trend. We conclude that fiscal policy recommendations should take into account the position of the economy in the cycle in assessing their effectiveness and that the impact of government spending shocks is limited in the UK in non-recessionary periods. 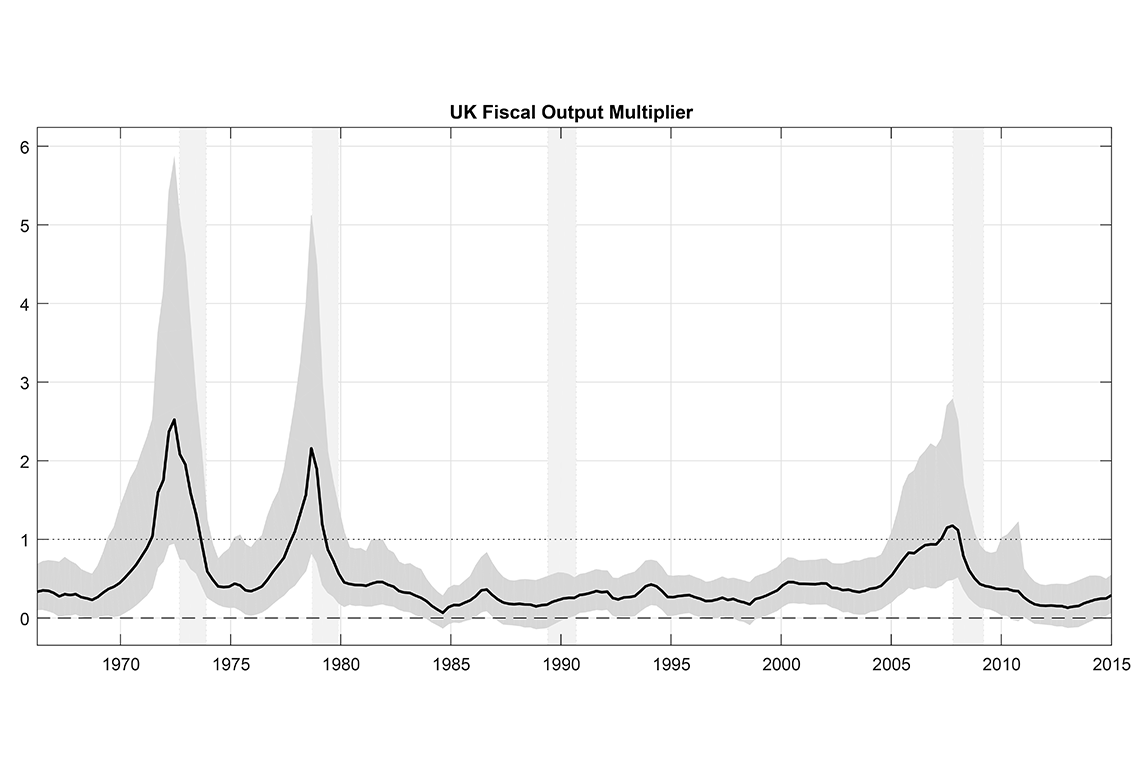 In this paper, we study whether the effect of fiscal stimuli on economic activity – the so-called government spending multiplier – varies over time, taking the example of the UK over the past 50 years. The UK is an interesting example since in its recent economic history there have been several moments characterized by intense debates about how changes in government spending may affect the economy. In 2008, the UK was one of the major advanced countries, together with the U.S., who implemented a strong counter-cyclical fiscal expansion as a response to the financial crisis. The reversal of the fiscal stimulus, begun in 2010, has given rise to a harsh debate on austerity.

Economic theory offers a number of reasons why fiscal spending multipliers may be time-varying. They can be broadly divided into two groups: cyclical theories and structural theories. Prominent examples of cyclical theories put forward three main explanations for time variation: economic slack, financial frictions, and the zero lower bound (ZLB) on nominal interest rates. On the structural side, explanations for time-variation in government spending multipliers include trade openness and the amount of fiscal space, among others.

This paper contributes to the literature on the non-linear effects of fiscal policy by using an econometric framework (a time-varying parameter factor augmented vector autoregressive model, TVP-FAVAR) that is flexible enough to distinguish cyclical variations from structural changes in government spending multipliers and rich enough to discriminate between different theoretical transmission mechanisms.

Our results show that UK government spending multipliers vary over time and that most of the variation is cyclical. They are typically above one in recessions and below one in expansion periods. By contrast, multipliers do not exhibit a visible structural trend.  When we dig deeper to understand which factors drive the cyclical variation, the results of the model are consistent with theories emphasizing the role of financial frictions and economic slack. Typically, a larger impact on output is accompanied by stronger effects on private sector credit generation, suggesting that fiscal expansions help relieving credit constraints. Finally, according to our findings, UK multipliers are not systematically higher during the recent zero lower bound period.

Given the evidence from our model, we conclude that fiscal policy recommendations should take into account the position of the economy in the cycle in assessing their effectiveness. In particular, we find that in non-recessionary periods the impact of fiscal spending shocks is limited as crowding-out effects are large, suggesting a cautionary tale for fiscal policy to stimulate output in the UK during expansionary phases of the business cycle.