Trade in services is playing an increasingly important role in French foreign trade. Between 2000 and 2019, it grew by 156%, twice as fast as trade in goods (+75%) or GDP (+64%). It also generated an average annual surplus of over EUR 20 billion. The nature of the services traded has also changed: the share of business services, which take place upstream (research and development, trade in intellectual property) or during the production process (consultancy, IT services), increased (from 65% to 78%), to the detriment of services to final consumers (travel, leisure).

The health crisis has strongly affected trade in services. French exports dropped by 16% in 2020, and imports by 14%, leading to a EUR 16 billion surplus, down from EUR 24 billion in 2019. 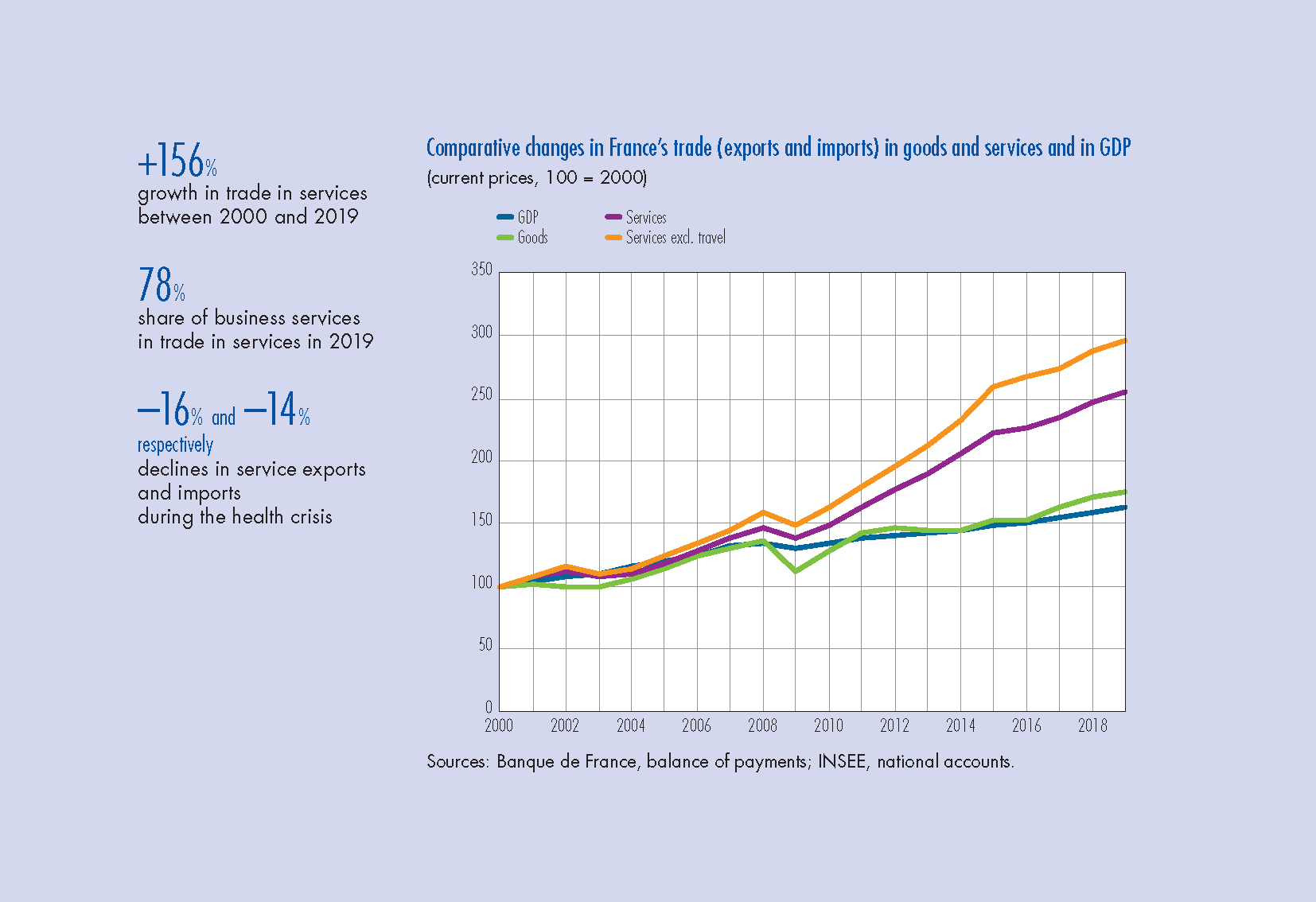 The technological advances in information and telecommunications, and the efforts made to liberalise service sectors worldwide, have greatly increased the amount of tradable activities across national borders. In addition, since the conclusion of the Uruguay Round in 1994, trade in services has benefited, like trade in goods, from the General Agreement on Trade in Services (GATS), aimed at facilitating international trade.

Over the past twenty years, France has taken full advantage of this new situation by intensifying its trade in services with the rest of the world and by integrating itself into global value chains. The share of tourism flows has decreased, and French companies have stepped up their imports and exports of business services. In addition, trade in services has generated a trade surplus for France over the entire period.

In 2020, the Covid‑19 pandemic and the health measures that accompanied it had a strong impact on international trade in services. However, thanks to the structure of French exports, the extent of their decline relative to the European countries most dependent on international tourism was limited.

Travel services, which record exports and imports resulting from international tourism, are a strong component of trade in services, with annual surpluses between EUR 10 billion and EUR 15 billion prior to the crisis. However, their weight is tending to decrease. While they accounted for a third of trade in services at the beginning of the 2000s (35% of exports and 27% of imports), they only represented a fifth in 2019 (21% of exports and 19% of imports). In addition, while the surplus of other service categories has grown steadily over the past 20 years, the travel surplus has deteriorated since 2013. Hence, in 2019, the surplus of non‑travel services (EUR 12.4 billion) exceeded that of travel services (EUR 11.6 billion – see Chart 2).