Banque de France Bulletin no. 236: Article 5 The importance of the link between climate change and population for economic development

This articles proposes a review of the literature on the effects of climate change on population and economic growth, especially in developing countries. Climate change affects mortality and living conditions via the direct impacts of extreme temperatures and via indirect impacts mediated by the environment and social systems. Demographic factors contribute to growth through various channels, including capital accumulation over individuals’ life cycle, investment in education, an increase in income per capita in countries where the fertility transition has occurred, and their impact on labour productivity. However, the macroeconomic importance of these factors remains subject to debate. Future research should therefore improve the quantification and integration of population effects in models assessing the macroeconomic impact of climate change, and take better account of climate policies. 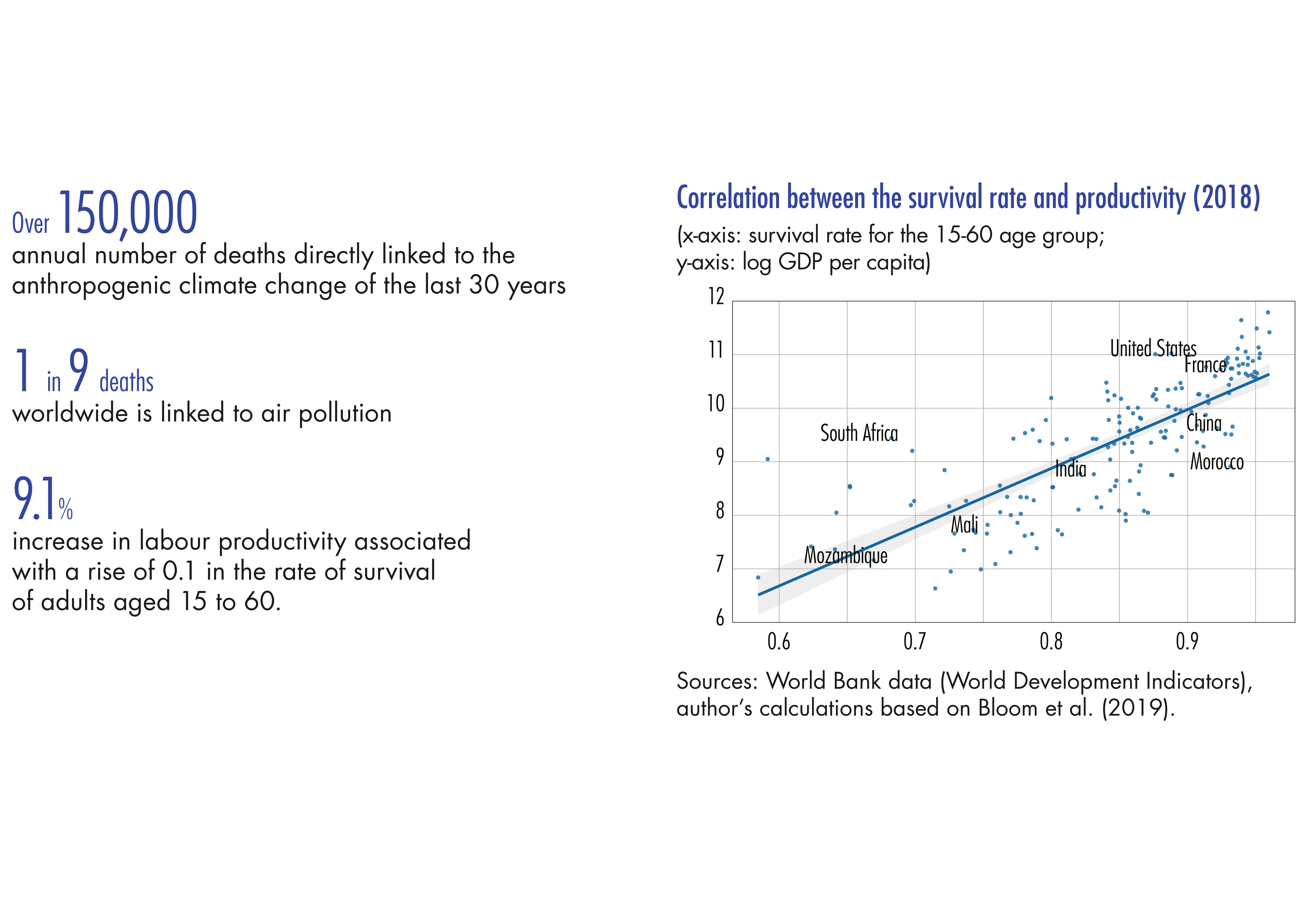 While the theoretical study of the impact of demographics on the environment dates back to Thomas Malthus in the 18th century, scientists have gradually produced evidence of a close but more complex relationship between climate change and demographic factors. Indeed, a close circular relationship exists between climate change and population, which also depends on the level of economic development. Levels of greenhouse gas emissions are not directly correlated to demographic weight or to rates of demographic growth, and developed countries’ share of emissions is systematically higher than their share of the global population. In addition, developing countries are particularly vulnerable to the global phenomenon of climate change. In these countries, the main concern related to the link between climate and demographic factors is about the impact of climate change on the population, which can in turn affect economic growth.

The literature in environmental economics identifies and quantifies several channels through which climate change affects populations’ living conditions: direct effects and indirect effects mediated by the environment or social systems.

The effects of temperature on demographics have been studied in depth and are widely recognised by global institutions. According to the World Health Organization (WHO), for example, the anthropogenic climate change of the last 30 years already claims more than 150,000 lives per year.

A large portion of the literature in environmental economics focuses on the impacts of extreme temperatures, as illustrated by the literature reviews published by Dell et al. (2014) and Deschenes (2014). Many of these studies use a panel-based approach and historical data on temperature changes to show that extreme temperatures have a significant effect on mortality. In the United States, one additional day of hot weather increases the annual rate of mortality by 0.11%, with children and the elderly the most exposed (Deschenes and Greenstone, 2011).

However, this literature focuses mainly on rich countries, and the effects may differ markedly in developing countries. For example, the impact of extreme temperatures on the mortality rate is estimated to be up to 20 times greater in India than in the United States. It is also found to be concentrated mainly in rural areas, suggesting that urban installations play a protective role (Burgess et al., 2017). …

publication
Banque de France Bulletin no. 236: The importance of the link between climate change and population for economic development
Download (EN)
Economic research