This paper takes stock of the literature on the unconventional monetary policies, from their implementation to their effects on the economy. In particular, we discuss in detail the two main measures implemented in most developed economies, namely forward guidance and large-scale asset purchases. Overall, there is near consensus that these measures have been useful, although there are a few dissenting views. Because unconventional monetary policies have left their mark on economies and on the balance sheets of central banks, we offer insights into their legacy and ask whether they have led to a change in "the rules of the game" for setting interest rates and choosing the size and composition of central banks’ balance sheets. Finally, we discuss whether to modify the objectives and the instruments of monetary policy in the future, in comparison with the pre-crisis situation. 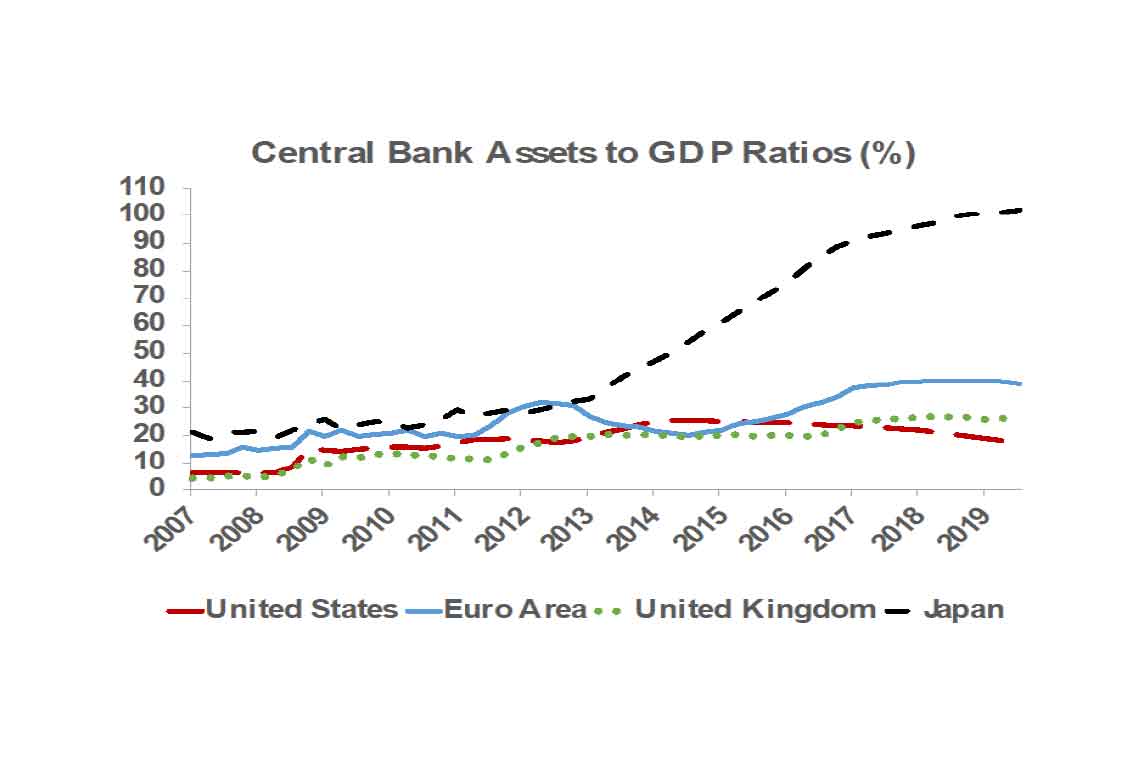 The 2007-08 financial crisis, also known as the global financial crisis (GFC), had a dramatic impact on both financial markets and the real economy. Across developed economies, output and inflation dropped sharply. Central banks reacted by increasing massively their liquidity provision to the banking sector and by lowering interest rates aggressively. Once interest rates got close to zero, they resorted to unconventional monetary policies (UMPs), in the face of flagging economic growth and deflationary risks (Drumetz et al., 2015). These measures were essentially of two types. First, central banks gave forward guidance (FG), meaning that they provided information about their future monetary policy intentions, based on their assessment of the outlook for price stability. Second, central banks purchased large quantities of assets in order to put downward pressure on long-term interest rates. As a consequence, their balance sheets expanded dramatically (see figure below). The Covid-19 epidemic also recently prompted renewed lender-of-last resort interventions and asset purchases by central banks in order to ease financial constraints.
This paper considers three main sorts of issues, according to whether they relate to the past, the present or the future.
Regarding the past, on top of FG and large-scale asset purchases (LSAPs), we also devote a specific section to the ECB’s responses to the sovereign debt crisis. Overall, there is near consensus that these measures have been effective in influencing both financial markets and the broader economy.
Regarding the present, UMPs have left their mark on economies and on the balance sheets of central banks. In this regard, central banks that have had recourse to UMPs may wish to enter, or have already entered in the case of the Fed, a process of monetary policy “normalisation”. A fundamental reason for normalisation lies in the desire of central banks to give themselves room for manoeuvre before a likely future recession. Furthermore, the effects of UMPs on the economy are much less well understood, thus more uncertain and harder to predict, than the effects of conventional interest rate changes. In this context, we ask whether “the rules of the game” for setting interest rates and choosing the size and composition of central banks’ balance sheets have changed because of the implementation of UMPs. We conclude that ultra-low interest-rate policies have not fundamentally altered monetary transmission channels, although there are signs of increased downward rigidity of bank lending rates in the euro area when policy rates are stuck at their effective lower bound. Furthermore, in the absence of an optimal size for the central bank’s balance sheet, central banks could unwind LSAPs it they do not wish to weigh on risk premiums or to help actively banks to fulfill their liquidity requirements.
Regarding the future, we discuss whether to change the objectives of monetary policy. It appears that raising the inflation target would seem too blunt an instrument to reduce efficiently the severe costs of zero-bound episodes. From a more practical point of view, a higher inflation target may be difficult to communicate on for central banks, which have long insisted on their role in preserving price stability and have won the support of the public in pursuing that mission. Another change in the strategy could be to use monetary policy to “lean against the wind” (LAW). However, the dominant view in the post GFC period still prescribes monetary policy should not respond to financial stability concerns. Furthermore, the new macroprudential framework seems to represent the most effective tool for ensuring financial stability, because it can directly re-strain excessive leverage or risk-taking. We also discuss whether monetary policy instruments should change in comparison with the pre-crisis period. We point that there are both benefits and costs to LSAPs, both in normal and crisis times, although the benefits are more likely to outweigh the costs in times of crisis. We finally discuss two so far unused monetary policy instruments: “helicopter money” and the elimination of the effective lower bound.