Working Paper Series no. 751: Wealth effect on consumption during the sovereign debt crisis: Households heterogeneity in the Euro area

This paper studies the heterogeneity of the marginal propensity to consume out of wealth (MPC) both across and within countries. We estimate the MPC based on a cross-country harmonized household level dataset which combines surveys on wealth, income and consumption. We use panel regressions and an instrumental variable approach. First, our panel-based MPC estimates are very similar to those obtained on aggregate data and show substantial heterogeneity across countries. The wealth effect is coming both from housing and financial assets, while the main asset channel varies between countries. Second, the MPC is higher for low-wealth households, whatever the country. Third, we find some asymmetries across countries regarding the reaction to losses versus gains. Fourth, higher MPC is obtained for the two main consumption expenditure categories. Fifth, we find evidences that housing prices shock decreases consumption inequality while financial wealth shocks have a limited effect on consumption inequality. 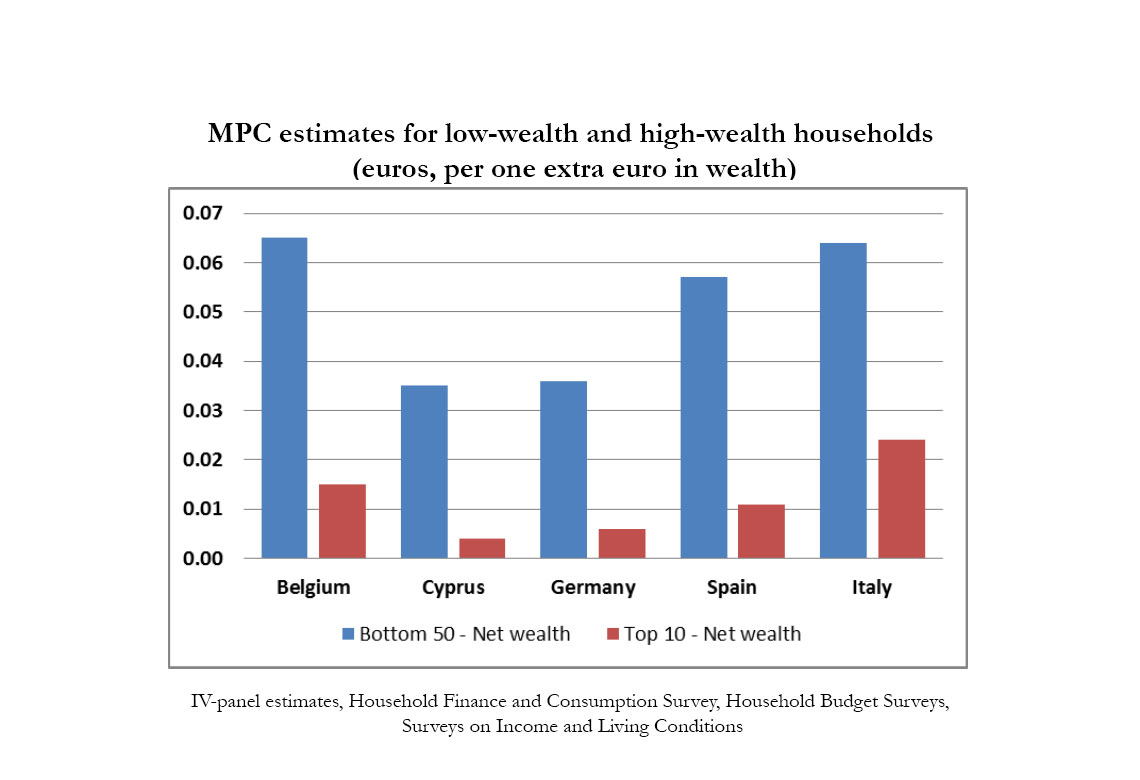 The wealth effect on consumption is one crucial channel for monetary policy transmission. A growing literature shows that the marginal propensity to consume out of wealth may differ across households depending on the type of the shocks, on households’ asset composition and indebtedness. This potential heterogeneity may have significant policy implications especially regarding the effectiveness of monetary policy transmission as well as their distributional consequences within a monetary union like the Euro area (Slacalek et al., 2019).
This paper studies the heterogeneity in the marginal propensity to consume out of wealth (MPC) both within and across five Euro area countries (Belgium, Cyprus, Germany, Spain and Italy) over the period 2010-2014. Consequently, we cover a wide cross-country heterogeneity in terms of country size and economic situations in the Euro area.  Indeed, there was a huge cross-country heterogeneity in asset price developments over 2010-2014, a period that we are able to cover with our microdata set.

We use an instrumented panel regression approach based on household level information. It allows us to investigate various dimensions of heterogeneity in the marginal propensity to consume out of wealth across households and across countries, as well as to deal with the endogeneity issues arising from unobservable individual heterogeneity and savings behaviours. We build a unique panel dataset combining individual data from wealth surveys (Household Finance and Consumption Survey, ECB), income surveys (Survey on Income and Living Conditions, National Statistical Institutes) and consumption surveys (Household Budget Surveys, National Statistical Institutes).

First, we find significant marginal propensity to consume out of wealth that are in line with macro-based estimates (Guerrieri and Mendicino, 2018; Slacalek 2009). The MPC out of wealth levels at 4.6 cents in Italy, meaning that one additional euro of wealth is associated with 4.6 cents of additional annual consumption. The MPC is about 2.3 cents in Belgium, 1.6 cent in Spain, while it is small in Germany and in Cyprus (less than one cent). The wealth effect on consumption is coming both from housing and financial assets in most countries, while the main asset channel varies between countries. As an extension and robustness check, we are able to account for permanent income in our analysis, and still find significant wealth effects on consumption for all countries.

Second, the marginal propensity to consume out of wealth is higher for low-wealth households than for the wealthy ones. Such a pattern is observed along the net wealth distribution for all countries (Figure A). This pattern remains unchanged when considering detailed expenditures items instead of total non-durable consumption expenditure.

Fourth, we find significant wealth effects on most of the categories of consumption for all countries. Higher MPC is obtained in all countries for the two main consumption categories in terms of shares of total non-durable consumption which are also necessities (“Housing, water, electricity, gas and other fuels” and “Food and non-alcoholic beverages”). At the opposite, the wealth effect on “education” or on “restaurants and hotels” is not statistically significant.