Working Paper Series no. 871: When Could Macroprudential and Monetary Policies Be in Conflict?

This paper aims to provide a comprehensive analysis of the potential conflicts between macroprudential and monetary policies within a DGSE model with financial frictions. The identification of conflicts is conditional on different types of shocks, policy instruments, and policy objectives. We first find that conflicts are not systematic but are fairly frequent, especially in the case of supply-side and widespread shocks such as investment efficiency and bank capital shocks. Second, monetary policy and countercyclical capital requirements generate conflicts in many circumstances. By affecting interest rates, they both “get in all the cracks”, albeit with their respective targets generally moving in opposite directions. Nonetheless, monetary policy could reduce its adverse financial side effects by responding strongly to the output gap. Third, countercyclical loan-to-value caps, as sector-specific instruments, cause fewer conflicts. Thus, they can be more easily implemented without concerns about generating spillovers, whereas smooth coordination is required between state-contingent capital requirements and monetary policy. 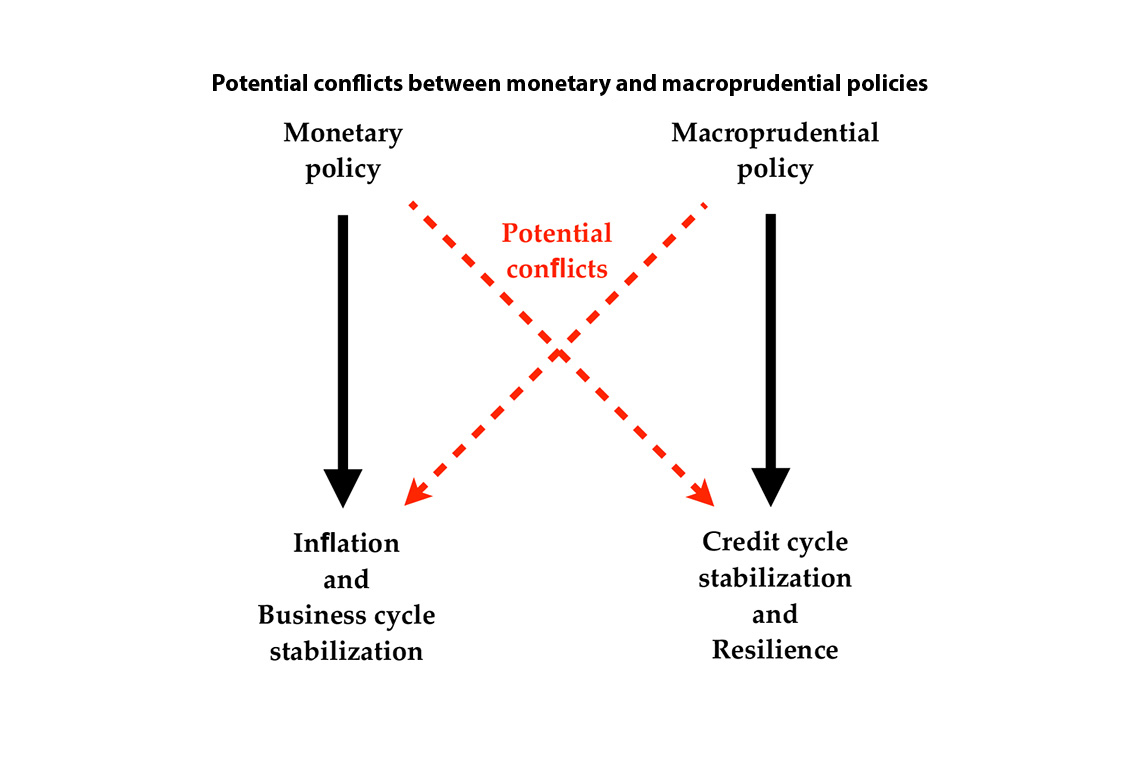 Macroprudential policy has become a fully-fledged tool of economic policy in recent years, as shown by the prompt relaxation of financial requirements in response to the COVID-19 crisis in many countries. This development is supported by both theoretical foundations and empirical evidence of effectiveness.

Hence, this research aims to provide a comprehensive analysis of the conditions under which such policy conflicts may arise. These conditions are evaluated based on:

(i)     Different types of shocks (real vs financial, demand vs supply-side, sectoral vs economy-wide);

Our theoretical investigation builds on a DSGE model embedding a banking sector and featuring financial frictions. Moreover, we introduce in this model three macroprudential rules pursuing two common and representative regulatory objectives, i.e., building buffers and taming lending practices. The first instrument is a regulatory countercyclical capital buffer (CCyB) that supplements, conditionally on the context, the regulatory fixed capital that banks are required to hold. In addition, we include two state-dependent loan-to-value (LTV) caps, for households and firms, which aim to dampen the credit cycle by reducing procyclical feedback between asset prices and credit. In line with regulatory recommendations, we assume that these three macroprudential instruments react to excess credit (i.e., the credit-to-GDP gap). Finally, we model monetary policy as a standard interest rate rule.

To identify conflicts between monetary and macroprudential policies, we follow a descriptive approach, which relies on the variance of variables that generally enter the welfare-based loss functions of policymakers: inflation, output and credit-to-GDP gap. We examine the sensitivity of these variances to the reaction parameters of the macroprudential and monetary policy rules. Concretely, a conflict is identified when increasing the strength of the response of macroprudential (monetary) policy rules leads to higher inflation volatility and\or a larger output gap (resp., credit-to-GDP gap) in the contexts depicted by four different and representative shocks.

We find that conflicts between macroprudential and monetary policies are fairly frequent but not systematic. They are especially likely to arise in cases of investment efficiency and bank capital shocks. These two supply-side shocks have a more widespread impact on the economy than sector-specific shocks such as housing shocks. Regarding policy instruments, it appears that CCyB and monetary policy generate conflicts in many cases. While they both “get in all the cracks” by widely impacting the economy through adjustments to retail rates, their respective main targets often move in opposite directions. However, it appears that the stronger the monetary policy response to the output gap, the less frequent are the conflicts stemming from monetary policy. On the contrary, LTV caps, as sector-specific instruments, cause few conflicts.

These results suggest that, from the perspective of spillover effects, LTV limits can be more easily implemented than countercyclical banks’ capital buffers, which require smooth coordination with monetary policy. Furthermore, the latter could respond more strongly to the output gap to mitigate the adverse side effects it otherwise causes on the credit cycle.

publication
Working Paper Series no. 871: When Could Macroprudential and Monetary Policies Be in Conflict?
Download (EN)