Working Paper Series no. 630: Why Have Interest Rates Fallen far Below the Return on Capital

Risk-free rates have been falling since the 1980s. The return on capital, defined here as the profits over the stock of capital, has not. We analyze these trends in a calibrated OLG model designed to encompass many of the "usual suspects" cited in the debate on secular stagnation. Declining labor force and productivity growth imply a limited decline in real interest rates and deleveraging cannot account for the joint decline in the risk free rate and increase in the risk premium. If we allow for a change in the (perceived) risk to productivity growth to fit the data, we find that the decline in the risk-free rate requires an increase in the borrowing capacity of the indebted agents in the model, consistent with the increase in the sum of public and private debt since the crisis but at odds with a deleveraging-based explanation put forth in Eggertsson and Krugman (2012). 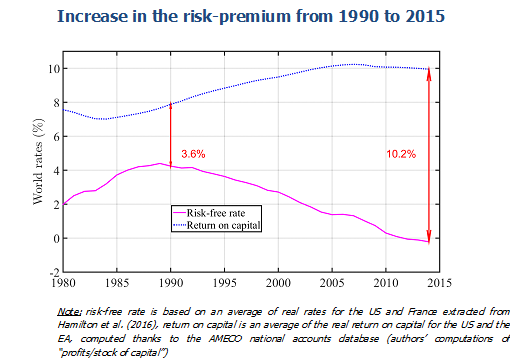 The question we address is based on two stylized facts.
First, real interest rates have declined steadily over the last 2 decades. This downward trend is observed across OECD countries, for short-term and long-term interest rates as well as estimates of the natural rate of interest, and whatever the approach taken to approximate inflation expectations to define ex ante real interest rates. Following Summers (2014) many economists have associated this decline to secular stagnation. The lower growth rates of per capita GDP and the demographic transition imply lower investment and higher savings so much so that the return to savings should decline.
Second, the return to capital as measured from national accounts has remained flat. Gomme et al. (2011) build the return to productive capital as the net operating surplus, which is equal to value added minus depreciation and payments to labor, divided by the capital stock. Gomme et al. (2015) and Caballero et al. (2017) stress that, in the US, return to productive capital has no trend. It fluctuates with the cycle around 10 to 11 percent before tax and around 7 percent after tax. We compute similar indicators of the return on productive capital for the Euro area and the US from the AMECO database. Again, we see no downward trend in this measure of the return on investment. Altogether, we observe both a downward trend in real interest rates and stable return to productive capital (see Figure).
The possible explanations of a permanent decline in real interest rates have been largely discussed (Fischer 2016a, 2016b, Teulings and Baldwin 2014, Bean et al. 2015, Gourinchas et al. 2016) and include aging pressure on savings, income inequality, a slower pace of productivity, deleveraging, a collapse in the relative price of investment, a shortage of safe assets and an increase in the perception or risks. But so far there has been little quantitative evaluation of the competing explanations (but see Rachel and Smith 2015) and little of it model-based.
That’s why we develop a framework combining Cœurdacier et al. (2015) and Eggertsson and Mehrotra (2014) to encompass most of the previous explanations for low interest rates. We extend the model to include risk, this allows to explain the divergence between risk-free rates and the return on capital; it also makes contact with the literature on safe assets (Caballero et al. 2008, Caballero and Farhi 2014) because safe assets only make sense in a context with risk.
The model is an overlapping generation where agents live three periods, and where there are two assets, the debt and a risky asset. Young agents borrow (safe asset) and face to a borrowing constraint, while middle-aged lend and buy capital (risky asset). There is uncertainty on productivity. The interest rate is then determined by the Euler equation of the savers, within which the constraints faced by the borrowers and other determinants enter through market clearing. Risk induces also a portfolio choice for the savers.

publication
Working Paper Series no. 630: Why Have Interest Rates Fallen far Below the Return on Capital
Download (EN)