Central banks (in particular the Banque de France and the European Central Bank) have played a leading role in taking into account the economic and financial issues of climate change. In addition to climate-related issues, the scientific community is also sounding the alarm about the impact of human activities on biodiversity and is speaking of a dangerous and accelerating decline. The losses of ecosystem services resulting from this collapse and the socio-economic changes required in response could generate major economic and financial risks. However, less headway has been made in understanding these risks than in the case of climate change. A framework and methodology therefore need to be established to analyse the risks associated with biodiversity loss. Recent studies estimating the financial system’s dependencies on ecosystem services and its biodiversity footprint are first steps in this direction. However, new conceptual and methodological approaches are still needed. 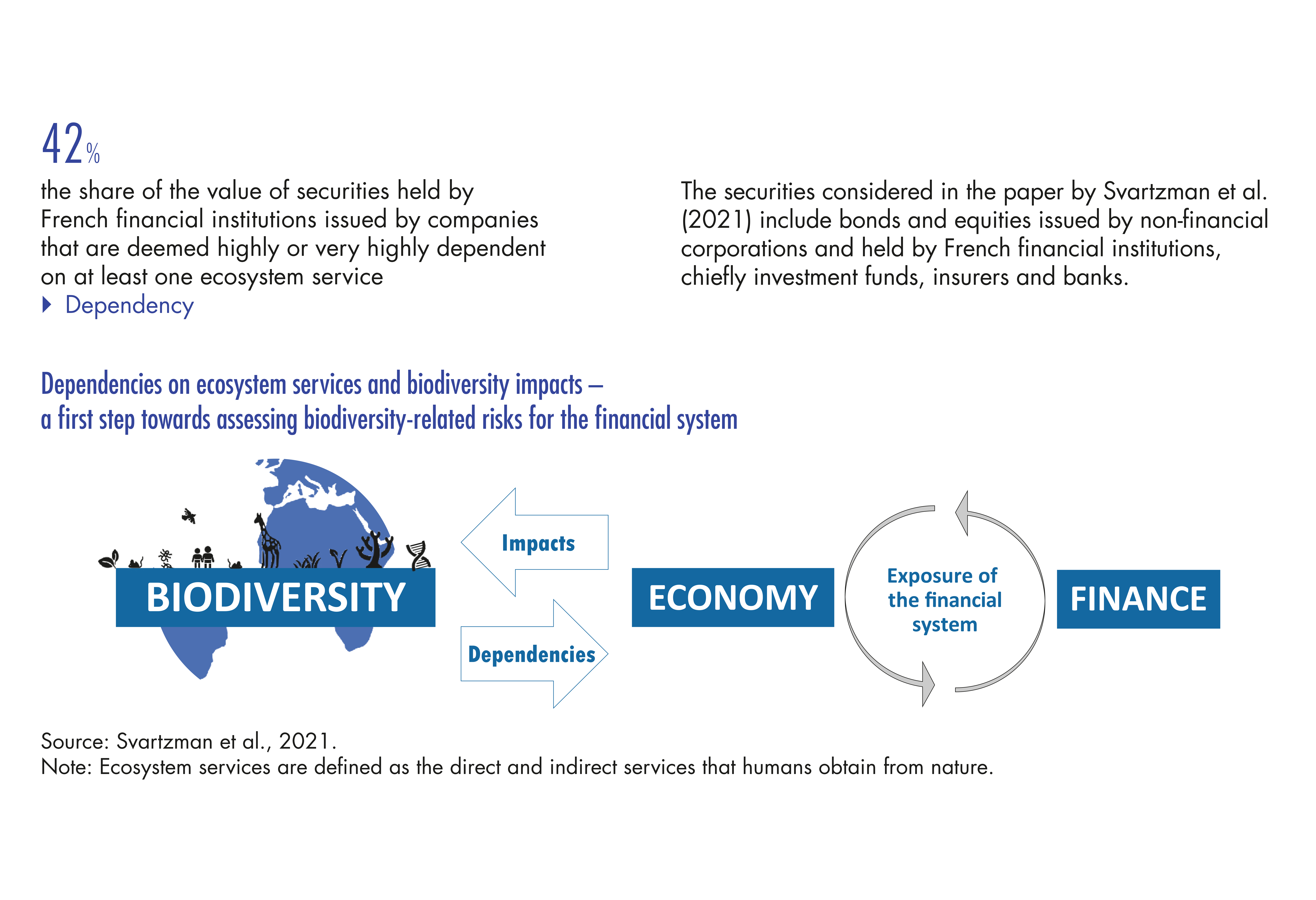 Accelerated decline in biodiversity due to human activity

Biodiversity is the living fabric of our planet. The Intergovernmental Science‑Policy Platform on Biodiversity and Ecosystem Services (IPBES, 2019) defines biological diversity as “the variability among living organisms from all sources including terrestrial, marine and other aquatic ecosystems and the ecological complexes of which they are a part. This includes diversity within species, between species and of ecosystems”.

Human activity is causing a rapid loss of biodiversity (IPBES, 2019), which is threatening “Earth’s ability to support complex life” (Bradshaw et al., 2021). The global rate of species extinction is already between tens to hundreds of times higher than it has averaged over the past ten million years and is accelerating (IPBES, 2019). Biologists believe that we are currently entering Earth’s sixth mass extinction. The last one occurred 65 million years ago (Ceballos et al., 2015). Ecosystem and habitat diversity has also been severely affected. Old‑growth forests, insular ecosystems and wetlands are particularly at risk (IPBES, 2019).

Human activity is directly and indirectly responsible for the collapse in biodiversity. Globally, there are five main direct drivers of change. Starting with those with greatest impact, they include changes in land and sea use, direct exploitation of organisms,

climate change, pollution, and invasion of alien species (see Diagram 1). These direct drivers result from an array of indirect drivers that include consumption, production and trade patterns as well as technological innovations.

As a result, though it has received less attention than climate change, biodiversity loss is starting to feature more prominently on the international policy agenda. The next major event is the 15th meeting of the Conference of the Parties (COP 15) to the Convention on Biological Diversity, which will be held in April‑May 2022 in Kunming, China. The gathering is expected to adopt a global biodiversity framework for the 2021‑2030 period, with targets set in three broad areas: (i) reduce the threats to biodiversity, notably by protecting at least 30% of land, freshwater and marine areas by 2030; (ii) ensure that biodiversity benefits are used in a sustainable and shared way to meet people’s needs; and (iii) put in place operational tools and solutions and promote biodiversity mainstreaming.