By Pfister Christian
Thematic: Means of payment and currency in circulation

As of 2009, the concept of decentrally-issued digital assets which, according to their promoters, could replace legal tender, was put forward to the public. More than a decade on, this project has still not been implemented. Stablecoins, which have emerged more recently, are designed to be more like legal tender and aim to remedy the shortcomings in the first generation of crypto-assets. However, they still carry many risks. In response to these initiatives, both central banks and private operators have launched innovative projects in the field of payment infrastructure and instruments. The Banque de France in turn has begun experiments on a digital euro. 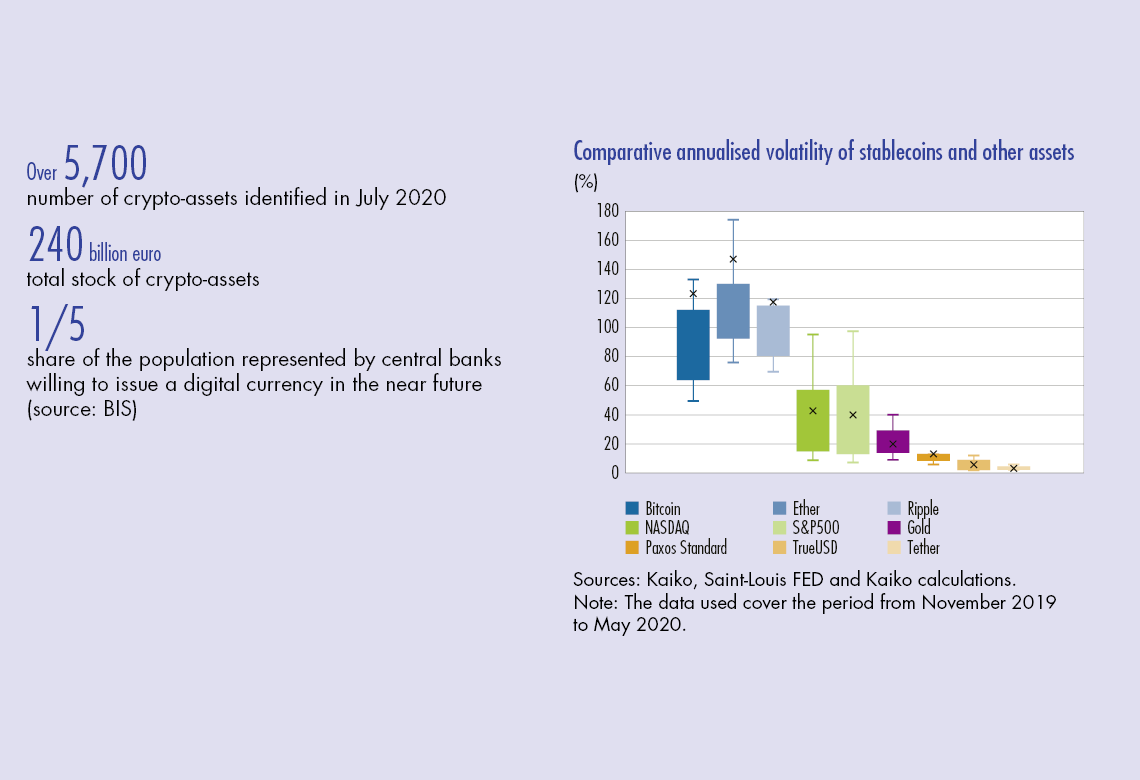 1 The first crypto‑assets, in search of a myth

By mid‑July 2020, there were more than 5,700 crypto‑assets in existence, with a total capitalisation of around EUR 240 billion (source: CoinMarketCap). However, Bitcoin, which was launched at the start of 2009, still accounted for close to 63% of this total, compared with some 10% for Ethereum, slightly over 3% for Ripple, around 4% for Tether and just under 2% for Bitcoin Cash. For this reason, and because from the outset it aimed to play a monetary role (Nakamoto, 2008), this analysis focuses on Bitcoin.

The three main characteristics of Bitcoin, which are also shared by many of the other crypto‑assets, are as follows (the main differences are also indicated):

• It combines a public key with a private key, which defines the asset in the absence of an issuer and guarantees user anonymity. This lack of an issuer is what most distinguishes Bitcoin from legal tender, be it fiduciary money or bank deposits.

• It relies on distributed ledger technology (DLT), which enables the decentralised confirmation of transactions. In most systems, the transactions are validated in the form of “blocks” that are linked together in a chain, hence the name “blockchain”. In the case of some crypto‑assets, however, such as Ripple or assets issued via ICOs (initial coin offerings; see below), transaction confirmation is not decentralised.

• It uses cryptography. This is systematic in crypto‑assets, hence their name. It is also used increasingly for legal tender to increase transaction security. What are Bitcoin and the other first‑generation crypto‑assets used for? They are essentially used for three purposes (Pfister, 2019a):

• Carrying out payment transactions under a pseudonym, which helps to protect privacy but also facilitates the financing of illicit activities. An estimated quarter of the total number of Bitcoin transactions, and nearly half in terms of value, are thought to be linked to illegal activities (Foley et al., 2019).

• Transfers of funds abroad. The downside for users, however, is that the associated fees are difficult to evaluate ex ante due to price volatility in both legs of the transaction. The infrastructure may also become congested as it is ill‑equipped to process mass payments.

Overall, Bitcoin does not fulfil, or only partially fulfils the three functions of money (Banque de France, 2018). It is not a unit of account (it is rarely if ever used to price goods and services…