The payment delays granted by suppliers to their customers expose the former to cash flow disruptions, which are aggravated in the event of late payments and may put them in financial difficulty.
However, estimating companies’ probability of default using a bankruptcy prediction model shows that the effects of late customer payments are relatively limited. Indeed, while the existence of late customer payments raises a company’s probability of default by 25%, and by 40% if payments are over one month late, deteriorated financial structures increase it by at least a factor of four.
Finally, only 8 out of 100 failing companies are potentially exposed to this risk, three-quarters of which owing to late payments over 30 days. Nevertheless, when payments are made increasingly late, all types of companies are affected, regardless of their size, age or financial situation. 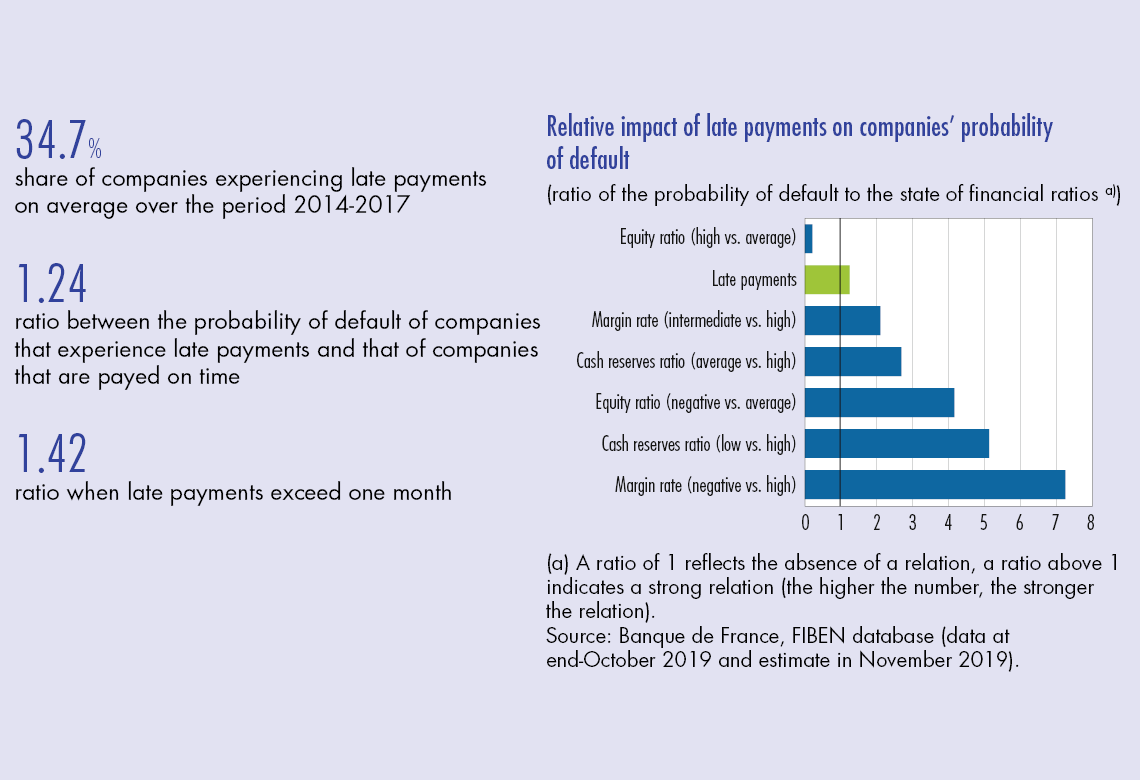 1 Exceeding the legal limit for payment delays: one in three suppliers is affected

Trade credit: from financing to the risk of contagion

Trade credit, which is credit granted through payment delays negotiated between customers and suppliers, is an important source of financing for businesses. According to the Observatoire des délais de paiement, in 2017, trade payables amounted to EUR 607 billion, i.e. 7.5% of French companies’ total liabilities.

The intensity of trade relations implies that the trade credit chain is a potential vector for spreading business difficulties, as late payments and payment defaults by customers can cause difficulties for suppliers themselves. This contagion mechanism can contribute to propagating macroeconomic and liquidity shocks along the trade credit chain and aggravate a recession.

However, while longer payment delays are a very common indicator of customer difficulties, it remains to be demonstrated that late payments by customers lead to supplier difficulties and trigger a contagion mechanism. This article sets out to accurately measure the impact of the length of customer payment delays on suppliers’ financial situation by using a bankruptcy prediction model (see Box 1) to estimate the increase in the probability of default associated with late payments.

Over one-third of companies record payment delays on receivable accounts over 60 days, a legal ceiling introduced by the Loi de modernisation de l’économie (Economic Modernisation Act - LME). On average, in the 2010s, one in five suppliers was less than 30 days late and one in six was more than 30 days late (see Table 1). The number of suppliers with days sales
outstanding (DSO) above the legal ceiling of 60 days is therefore still high, even though their share has dropped significantly since 2009, the date at which the Act came into force.

2 All late payments potentially increase the risk of failure

Late payments have a definite, but relative impact

Article 1 : France’s national wealth in 2018: Weaker growth in household wealth due to the fall in equity prices
Article 2 : Systemic risk buffer: what would this instrument be used for?
Article 3 : The informational value of credit ratings in the bank/firm relationship
Article 4 : French insurers’ investments remain under pressure from low rates
Article 8 : Do late customer payments impact companies’ probability of default?
Article 9 : The structure of income helps to understand changes in the household saving ratio in France