Banque de France Bulletin no. 227: Article 2 Systemic risk buffer: what would this instrument be used for?

The systemic risk buffer (SRB) is an additional capital requirement for the banking sector that aims at preventing or mitigating the non-cyclical dimension of risk. Indeed, systemic risks can magnify the impact of financial distress or of an external shock to the economy. They depend on the structural characteristics of the banking sector, in particular its size, degree of concentration and importance for the financing of the economy. They also result from the strength of interconnections between financial institutions and the associated risk of financial contagion. Fourteen countries have activated a SRB since its introduction into European legislation in 2014. As of today, the level of structural systemic risk does not require the implementation of a SRB in France. 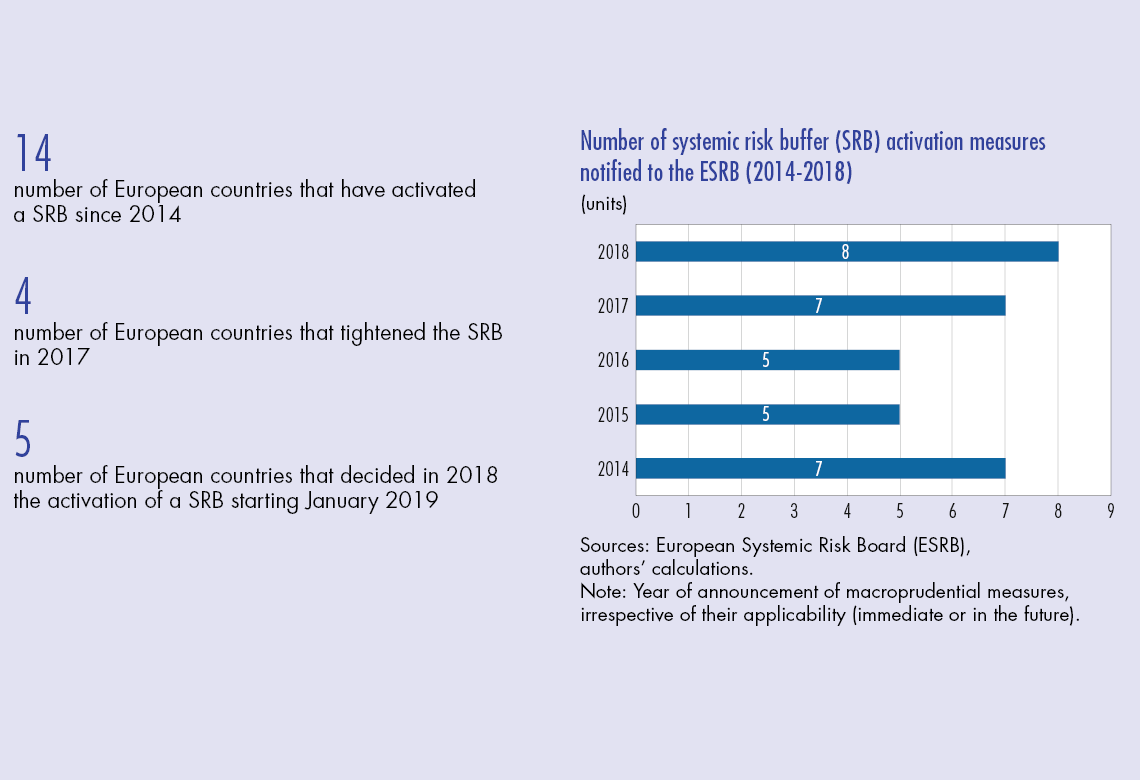 A second category of instruments aims at preventing risks that are not expected to diminish spontaneously over the financial cycle. These are the systemic risk buffer (SRB), as well as the buffers for Global Systemically Important Institutions (G-SIIs) and Other Systemically Important Institutions (O-SIIs). The risks covered stem partly from structural features of the banking sector, in particular its size and its importance for the financing of the economy, its degree of concentration or the level of interconnectedness between institutions and the associated risk of financial contagion. They also take into account the systemic footprint of certain institutions.

Other instruments also aim at limiting the risk of concentration, complexity and interconnectedness in the financial system, such as legal restrictions on risky speculative activities (2014 Volcker Rule in the United States, 2012 Liikanen Report in the European Union) or a tightening of large exposures requirements, among others.

1 Introduced in 2014, the SRB has been largely used in the European Union

A legal framework in the process of being adapted

In Europe, the regulatory package known as CRD IV/CRR, which entered into force in January 2014, provides national authorities with a set of macro prudential instruments. These are binding capital requirements which come on top of other regulatory requirements whose stacking defines the minimum solvency ratio that banks must meet (see Box 1 in Couaillier, Idier and Scalone, 2019). Failure to comply with these requirements would trigger automatic restrictions on the distribution of dividends to shareholders. Among them, the SRB “aims at preventing or mitigating systemic risks of a ‘long-term non-cyclical’ nature which could disrupt the financial system and have serious negative consequences on the real economy of a given Member State”.

As currently defined, the SRB can be used to tackle a wide range of risks, provided that (i) they can be classified as non-cyclical and long-term and (ii) they are not already…

publication
Banque de France Bulletin no. 227: Systemic risk buffer: what would this instrument be used for?
Download (EN)
Financial stability and financial system

Article 1 : France’s national wealth in 2018: Weaker growth in household wealth due to the fall in equity prices
Article 2 : Systemic risk buffer: what would this instrument be used for?
Article 3 : The informational value of credit ratings in the bank/firm relationship
Article 4 : French insurers’ investments remain under pressure from low rates
Article 8 : Do late customer payments impact companies’ probability of default?
Article 9 : The structure of income helps to understand changes in the household saving ratio in France