Working Paper Series no. 684: An Experimental Analysis Of The Effect Of Quantitative Easing

In this paper Adrian Penalver, Nobuyuki Hanaki, Eizo Akiyama, Yukihiko Funaki and Ryuichiro Ishikawa report the results of a repeated experiment in which a central bank buys bonds for cash in a quantitative easing (QE) operation in an otherwise standard asset market setting. The experiment is designed so that bonds have a constant fundamental value which is not affected by QE under rational expectations. By repeating the same experience three times, they investigate whether participants learn that prices should not rise above the fundamental price in the presence of QE (as found in (Penalver et al., 2017)). They find that some groups do learn this but most do not, instead becoming more convinced that QE boosts bond prices. These claims are based on significantly different behaviour of two treatment groups relative to a control group that doesn't have QE. 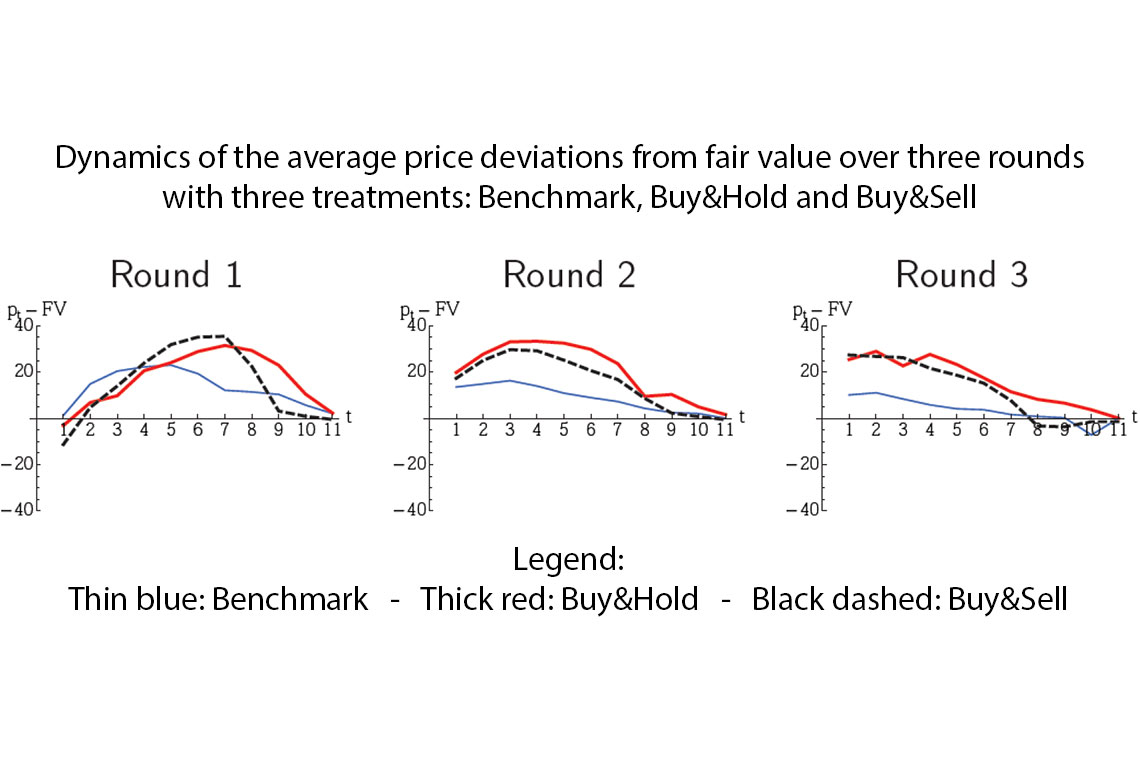 Quantitative easing (QE) is an unconventional monetary policy instrument available to central banks when their policy interest rates hit the effective lower bound. QE in its most basic form involves the purchase of government bonds in exchange for central bank reserves with the intention to retain them for a significant length of time. In an era in which central banks pay interest on reserves, QE is an exchange of one interest-bearing liability of the state for another. Under the textbook expectations hypothesis of the yield curve, QE can have no effect on bond yields if there is no change in the expected path of the policy interest rate and therefore no effect on output, employment or wages. In these circumstances, QE would just be an irrelevant shortening of the average maturity of net public debt.

In an earlier Working Paper we presented laboratory evidence that central bank purchases could raise bond prices even if government bonds and cash were perfect substitutes and the interest rate on cash was constant. The experiment was designed in such a way that QE would be ineffective under rational expectations. There was no uncertainty in the returns on bonds or cash and the principal repaid at the end of the experiment was equal to its fundamental value according to rational expectations. The presence of strongly statistically significant changes in prices in this original experiment suggests that a behavioural channel could also play a role in explaining the effectiveness of QE. QE could affect bond prices simply because traders believed it would.

A natural follow-up question to ask, which we address in this paper, is whether this is just a one-off effect? Won't traders realise after repeated experience that prices shouldn't move? This is not just an interesting academic exercise or robustness check but has important policy implications. If participants do learn, then the behavioural channel would weaken with repeated use. This would weaken the reliability of QE as an instrument for monetary policy stimulus if nominal interest rates hit the effective lower bound again in the future. (Nothing in the current paper says anything about the effectiveness of other channels through which QE affects bond prices.).

Our repeated experiments, illustrated in the Figure above, generally confirm the main results of the previous paper. Those in the benchmark treatment clearly learn that prices should not deviate from the fundamental price. In the QE treatments, some groups learn that the actions of the central bank (in this setting) should not affect the price but most come to "learn" that prices will rise and then fall back to fundamentals. These groups come to believe there is a pattern in the data.

Another interesting feature of the repeated QE treatments is that participants start to anticipate price increases, with the peak in prices occurring earlier and earlier and by the third round they rise from the start.

Overall, the results in this paper suggest that QE can be repeatedly effective even if a behavioural component helps explain some of the effect of central bank asset purchases on bond prices.

publication
Working Paper Series no. 684: An Experimental Analysis Of The Effect Of Quantitative Easing
Download (EN)