Banque de France Bulletin no. 217: Article 1 French banks were behind almost half of the increase in lending to euro area non-financial corporations and households in 2017

After accelerating sharply in 2014, growth in the euro area’s money supply (M3) has been stable since 2015 (4.6% in 2017), fuelled mainly by an increase in overnight deposits. Since end-2016, the French component has been growing faster than the euro area M3 aggregate. Its growth reached 8.3% in January 2018, outstripping the M3 aggregate by three points.
Sustained by low interest rates and the programme of government securities purchases by the Eurosystem, credit to the private sector and credit to general government were the main sources of money creation in both France and the euro area. In the private sector, almost half of annual credit flows to non-financial corporations (NFCs) and households were provided by French monetary financial institutions (MFIs; in 2017, this amounted to EUR 139.4 billion out of a total of EUR 297.2 billion in the euro area). 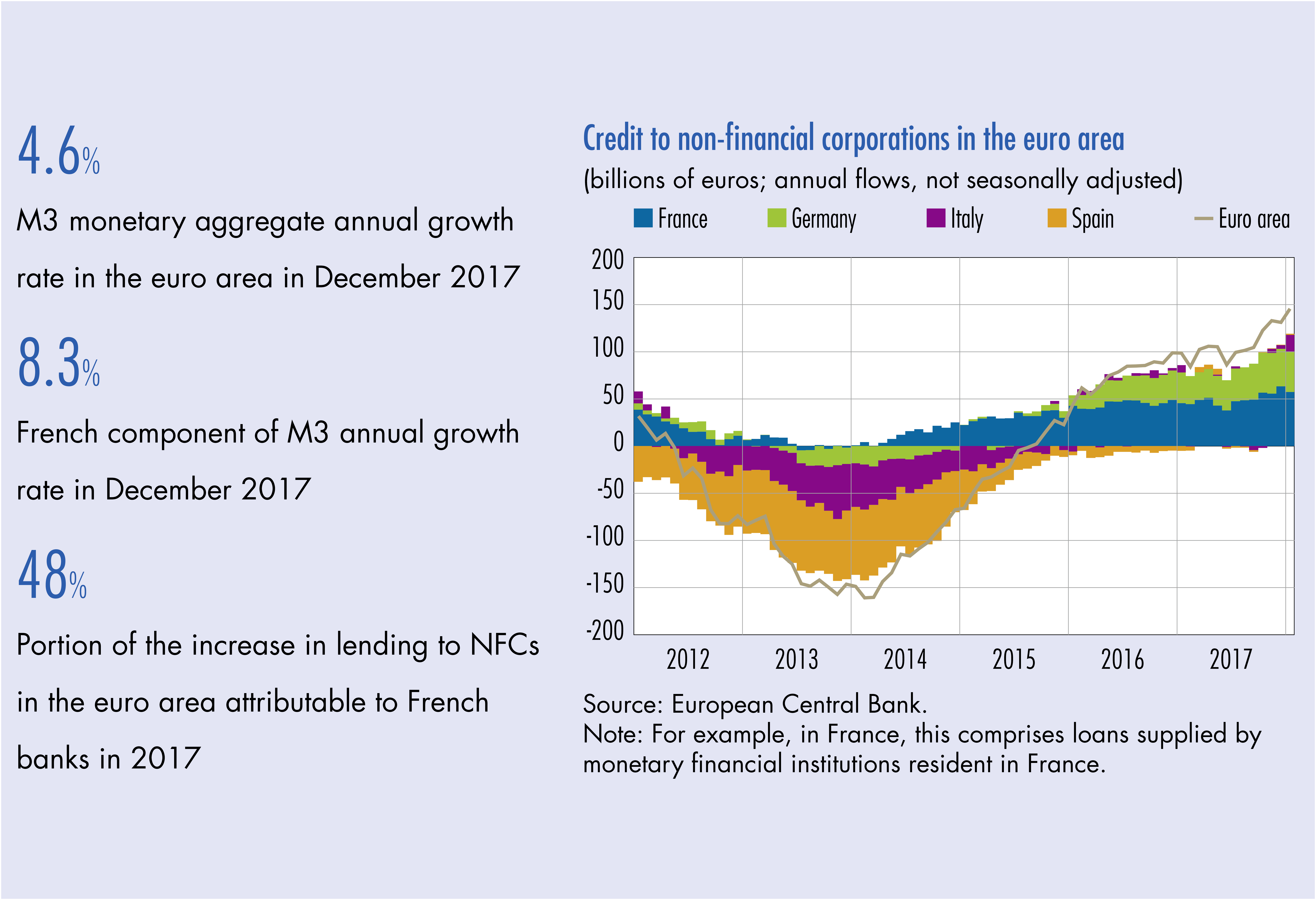 1.       Since the beginning of 2015, money supply in the euro area and France has grown  steadily, sustained by the increase in overnight deposits

Growth in the euro area’s money supply (see box) has not returned to the level recorded prior to the 2008 financial crisis. It started to pick up in 2010 and hovered around 1.7% in 2011 (see Chart 1). After a brief acceleration in 2012, money supply growth slowed again until April 2014. Then, between May 2014 and April 2015, it accelerated sharply, reaching 5.2% (see Chart 1). Since then, growth has been stable at around 5.0% (see table below). Since the start of 2012, money supply growth has been sustained mainly by a rise in overnight deposits. The contribution of the M1 “currency” component remains stable and the other money supply components have decreased overall over the last six years. This has resulted in greater liquidity for the component’s instruments. The M1 component’s weight in the M3 aggregate rose from 51% in January 2012 to 65% in December 2017 (see Chart 2).

Since November 2016, the French component has been growing faster than the euro area M3 aggregate

As in the euro area, overnight deposits have also fueled the acceleration in the French component since July 2014 (see Chart 4). At end-2014, the respective growth rates were 8.4% for the euro area and 9.0% for France.

publication
Banque de France Bulletin no. 217: French banks were behind almost half of the increase in lending to euro area non-financial corporations and households in 2017
Download (EN)
Credit and financing