Banque de France Bulletin no. 217: Article 2 Wage bargaining in Europe: a wide range of increasingly decentralised models since the crisis 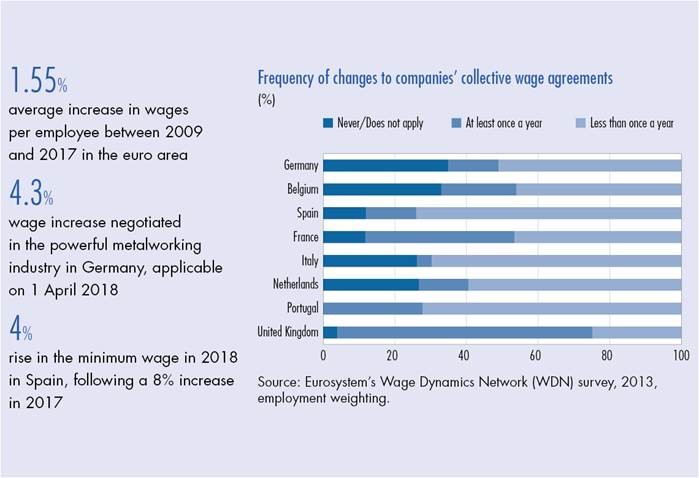 Wage bargaining systems differ across Europe according to two criteria: the importance given to bargaining in relation to legal and regulatory standards or to the provisions in the employment contract; and the degree of centralisation, i.e. the prevailing bargaining level (national, industry or company).

Government involvement in wage bargaining varies greatly across Europe: it is non-existent in the United Kingdom, but particularly strong in Belgium where a law regulates wage developments. In countries where wage bargaining is centralised (Germany, the Netherlands, Sweden), the law sets an institutional framework for consulting the social partners. In France and Portugal, negotiations take place at a less centralized level, but changes in the minimum wage affect the setting of industry-level wage floors. According to Fougère, Gautier and Roux (2016), the elasticity of industry-level wage floors to an increase in the French minimum wage is thus between 0.15% and 0.4%, less strong when wages are high.

Even though there is no single model, a common trend towards the decentralisation of wage bargaining emerged during the crisis. The objective was to better tailor conventional law – resulting from collective agreements – to individual companies’ situation. In particular, industry-level wage bargaining was more regulated, while company-level agreements were relaxed. For example, in Spain, since 2012, company-level collective wage agreements now have priority over higher-level agreements for all matters falling under Article 84.2 of the Workers’ Statute (base wage and additional compensation, overtime compensation, working hours, occupational classification, adaptation of the employment contract and family conciliation measures).