After highly encouraging half-yearly results, the vitality of the 80 largest French industrial and commercial groups was confirmed with a 5.3% increase in turnover during 2017.

Capitalising on their international activities, these groups reported extremely strong organic growth, which accounted for a 5.8 percentage point positive contribution to turnover. External growth brought an additional 1.7 percentage point increase, offset by a negative 2.2 percentage point contribution related to exchange rate effects and other variations resulting from the depreciation of the dollar against the euro.

This improvement in turnover proved to be a source of profitable growth: EBITDA1 rose by 7.2% year-on-year and net income rose by almost one-third (up 29.2%).

Thanks to these robust results, the main groups were able to reinforce their cash position and equity by 5.7% and 2.3%, respectively. 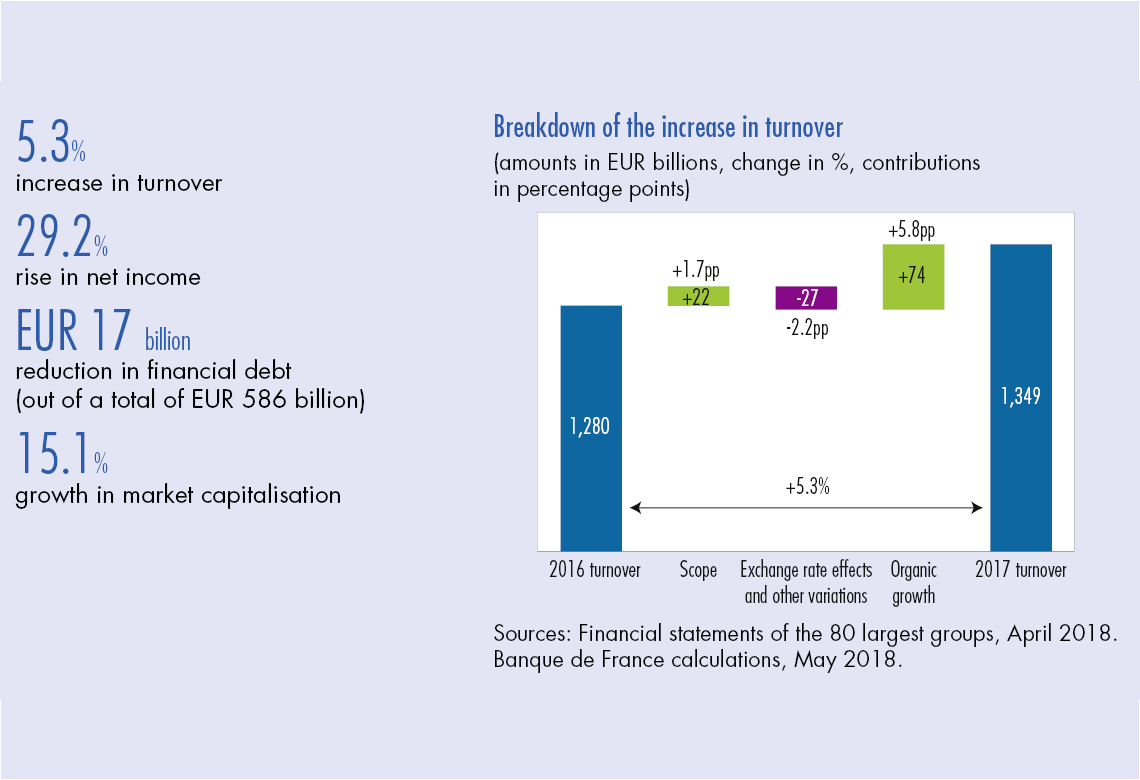 1 Turnover of the 80 largest French groups rebounded in 2017

Turnover was up significantly in 2017

These robust results following a period of relative stagnation were driven by the performances of the transport, accommodation and construction sector (an 11.4% increase in turnover), the industrial sector (an 8.9% increase) and the distribution and services sector (a 7.9% increase). Turnover in the energy and environment sector stabilised in 2017 after recording reductions in each of the last five years thanks to the performance in the "Rest of the world" area (up 9.4%).

In 2017, the main French groups benefited from an economic recovery that was shared globally, in that their turnover increased across all geographical areas, although the improvement was more pronounced in the "Americas" and the "Rest of the world" (up 8.9% and 9.6%, respectively, year-on-year). Nevertheless, the majority of their income – 59% of the total turnover of the main French groups – continued to come from Europe, with a little over a quarter of that amount generated by their business activities in France (see Table 1).

The overall increase in the turnover of the main French groups can be broken down between organic growth, changes in scope and exchange rate effects and other variations (see Chart 2).

The organic growth in turnover of the companies in the sample largely accounts for the upturn in activity during the reporting period as it contributed 5.8 percentage points to the increase in turnover. Furthermore, this upturn was observed across all sectors.

Changes in scope reflect the effects of acquisitions and disposals of subsidiaries. In 2017, they amounted to a positive 1.7 percentage point contribution to turnover.

The main groups continued their international expansion in 2017, which consequently increased their exposure to exchange rate fluctuations. The conversion of foreign subsidiaries’ national currency balances into euro during the preparation of the consolidated financial statements can have a marked impact on group turnover.