The 2007-09 financial crisis led to major corrections in global current accounts. However, “global imbalances” persist, raising concerns among economic policymakers. This article focuses on two key aspects of these imbalances. The first part describes how they have evolved over the recent period and how their correction has proved costly, given the required major adjustments in real exchange rates. The second part of the article provides detailed statistics on the size and composition of net and gross international investment positions. Due to the large size of gross positions, the income account has become more important for current account dynamics, contributing to the persistence of global imbalances. 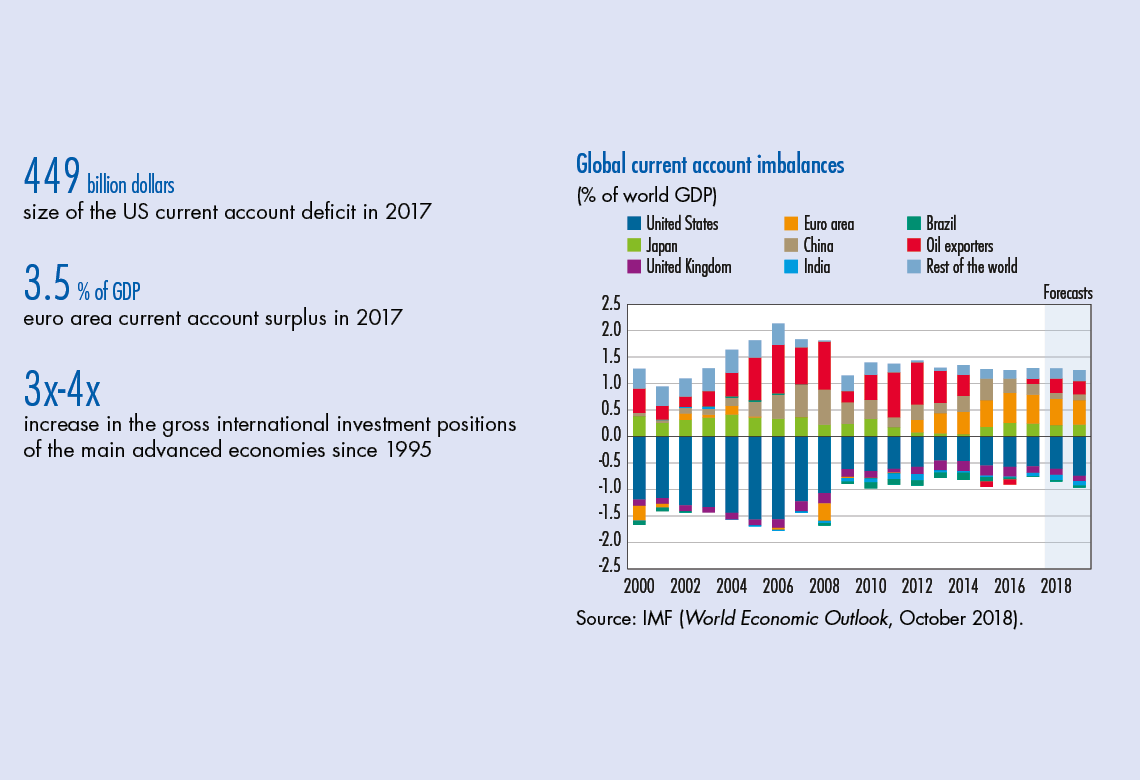 Since the late 1990s, the world economy has been characterised by a very substantial growth of global current account imbalances, in line with increasing globalisation. Despite a rebalancing process that started with the Great Recession in 2007-09, these global imbalances have remained large and persistent, in spite of short-term adjustments mainly related to commodity prices (see Chart 1).

Current account developments have been particularly striking in the euro area (see Chart 2). While countries such as Spain or Italy have rebalanced their current accounts, imbalances still persist, mostly due to the large surpluses of Germany and the Netherlands.

Should we care about these imbalances? After all, there is no reason why all countries in the world should be balanced at all times, as these imbalances simply reflect a gap between the savings and investment of economic agents operating within national territory. The financing capacities and needs of these agents give rise to capital inflows and outflows, which help smoothing consumption and investment over time.

However, excessive external imbalances are a source of concern because the funding of deficit countries by surplus economies may be subject to “sudden stops” (Milesi-Ferretti and Razin, 2000). Experience suggests that large imbalances are often a leading indicator of subsequent crises and sudden stops (Bussiere and Fratzscher, 2006). As Lane and Milesi-Ferretti (2017) show, current account balances prior to the great financial crisis exceeded levels consistent with underlying economic fundamentals and thus implied large and costly adjustments thereafter. These vulnerabilities are not confined to emerging market economies: large and persistent current account deficits may also precede banking crises in advanced economies such as European peripheral countries (Gourinchas and Obstfeld, 2012).

The recent economic history of the euro area provides an example of how excessive current account imbalances may be reversed – in an asymmetric way – due to a sudden stop in external funding of domestic agents. It turns out that the cost of the adjustment, which was mainly driven by a compression of internal demand in deficit economies, was substantial in terms of employment and economic growth, not only in the deficit countries but also at the global level.