Banque de France Bulletin no. 220: Article 4 A growing share of investment funds in the financial investments of insurers established in France in 2017

At end-2017, investments by French insurers amounted to EUR 2,628 billion, up 3.3% compared to 2016. The allocation of their assets is fairly stable from one year to the next, both from a geographical and a sectoral perspective. The share of investments aimed at the financing of non-financial corporations stood at 24%, i.e. EUR 618 billion, and 13.5%, i.e. EUR 355 billion, if we consider only companies established in France, after taking into account investments made indirectly by investment funds. Equity contributions to non-financial corporations established in France represented 5% of total investments, i.e. EUR 132 billion. While the financing provided to companies was significant in terms of amount, it continues to occupy a secondary position in relation to the overall investment capacity of the insurance sector. 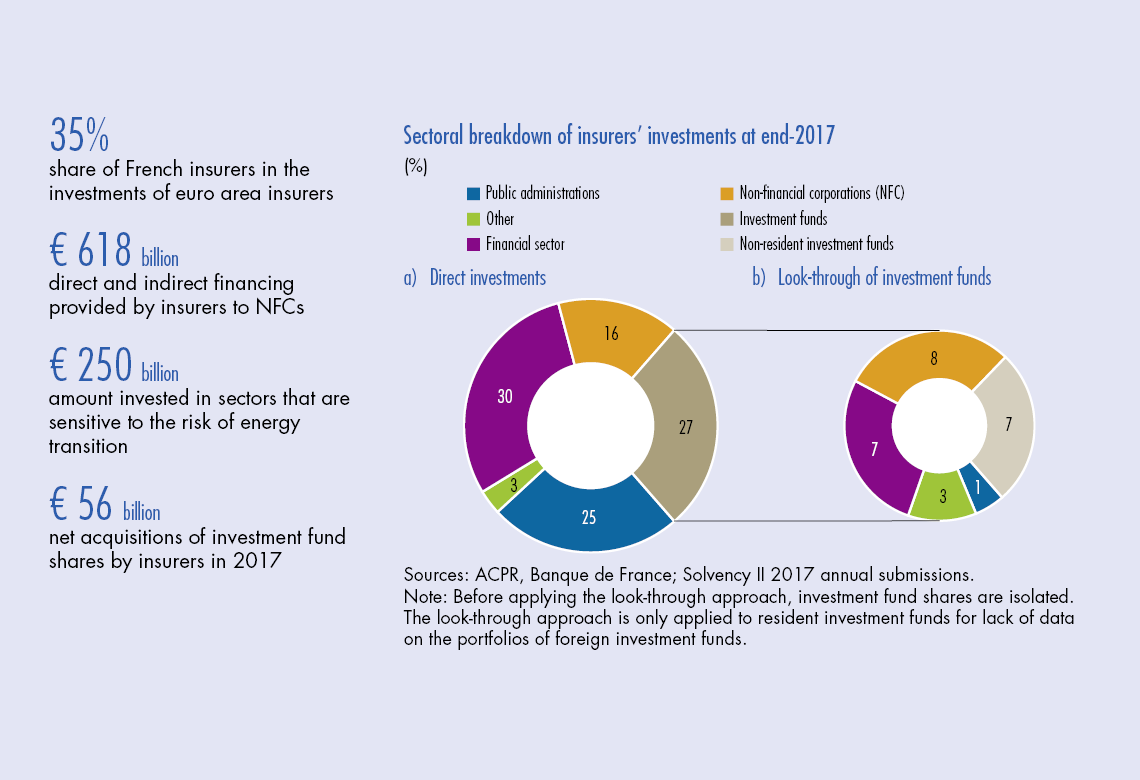 Investments are mainly focused on interest rate products, with an increasing share of investment funds

At end-2017, insurers established in France and subject to Solvency II, whose investments at market value amounted to EUR 2,628 billion, held 35% of the assets managed by euro area insurers. France is thus the largest market in the euro area. Life insurance predominates: 91% of assets are held by life and mixed insurers.

While the amount of investments was up 3.3% in 2017, the overall portfolio structure of French insurers subject to Solvency II has remained fairly stable over time. Bonds still account for the lion’s share (60%) of insurers’ assets, in particular those of life and mixed insurers.

In 2017, however, life and mixed insurers invested an increasing share of their assets in investment fund shares (up 2.7 points in 2017), at the expense of interest rate products (down 2.8 points in 2017). They maintained the overall breakdown of their assets between the public, financial and non-financial sectors. However, the relative share of financial and non-financial corporate bonds decreased slightly between 2016 and 2017.

The share of bonds was lower in the portfolios of non-life insurers (42%, compared with 60% for life and mixed insurers). Since most of the non-life insurance business consists of short-term commitments (annual renewal contracts and quick-compensation guarantees, except for casualty insurance and some niche activities), asset allocation is more diversified, more focused on investment fund shares, equities and tangible fixed assets. In particular, the share of equities is four times higher for non-life insurers than for life and mixed insurers.

Life and mixed insurers make different investments depending on the nature of the policies. For example, the assets backed by unit-linked policies, in which policyholders bear the market risk, are more widely invested in investment funds and are more exposed, via these investment funds, to equity risk (see Chart 2). Conversely, given the capital guarantee attached to euro-denominated contracts, insurers select investments that are redeemable and have less volatile valuations for their general funds, with bonds making up 76% of the total. In 2017, the (non-unit linked) general fund slightly increased its share invested in equities (up 0.6 percentage point) and in sovereign bonds (up 0.3 point) to the detriment of financial sector bonds (down 0.9 percentage point) and those of non-financial Corporations…

publication
Banque de France Bulletin no. 220: A growing share of investment funds in the financial investments of insurers established in France in 2017
Download (EN)
Credit and financing