Banque de France Bulletin no. 220: Article 2 Use of cash in France: the payment method of choice for low-value purchases

This article exploits French data from a survey of cash usage in the euro area, which was published in 2017 on behalf of the European Central Bank (ECB). Cash is the preferred method of payment at the point of sale in the euro area, accounting for three out of every four transactions and more than half of the total value of purchases. The survey results nonetheless vary across countries, with France in particular showing a high concentration of cash usage for small purchases, coupled with a strong predilection for cashless means of payment. Among the determinants of cash usage, sociodemographic criteria (gender, age, income and profession of consumers) are found to have very little impact. However, transaction characteristics play a predominant role, with the share of cash payments diminishing as the value of the purchase rises, and increasing for purchases in shops for day-to-day items. 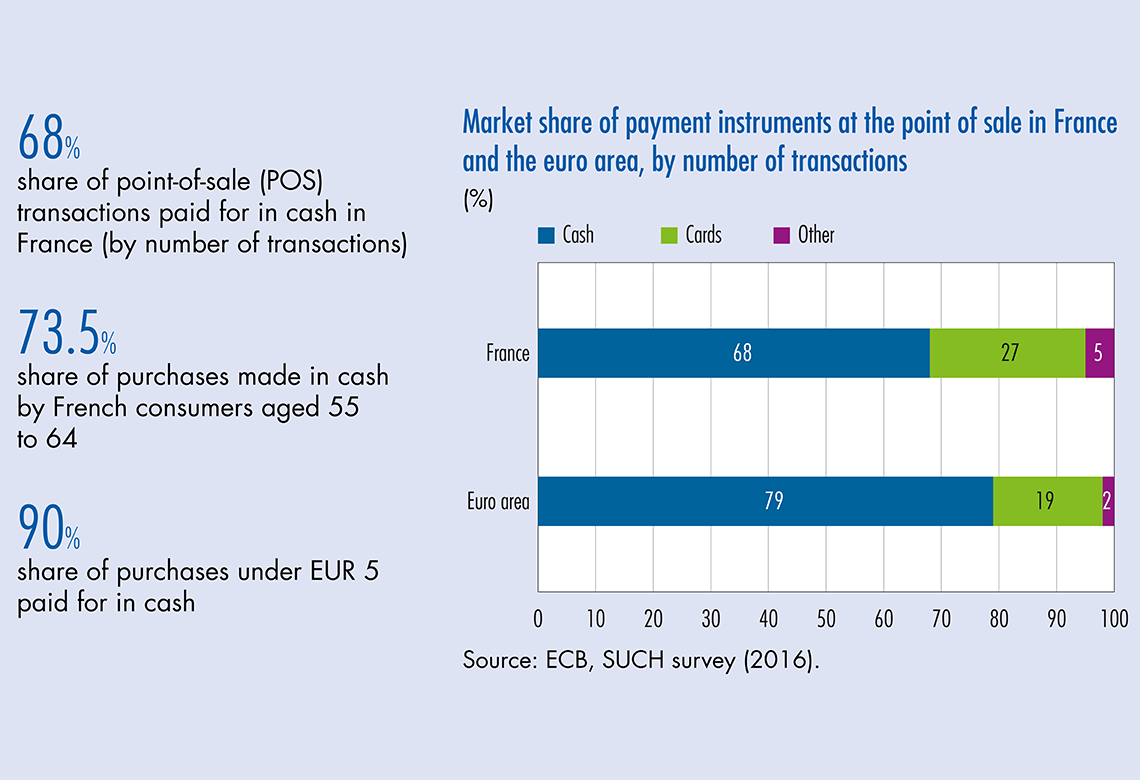 1. Cash usage remains significant in France despite consumers declaring a preference for cards

Cash was the most frequently used payment instrument among French participants in the SUCH survey: 68% of purchases at the point-of-sale (POS) were made with banknotes and coins, 27% by card and 5% using another method of payment (mainly cheques). France nonetheless has one of the lowest rates of cash usage in the euro area, alongside Luxembourg, Belgium, Finland, Estonia and the Netherlands (see Chart 1). By comparison, aggregate survey figures show that cash accounts for 79% of POS transactions in the overall euro area, with cards accounting for 19%.

2. An analysis of payment instrument use according to sociodemographic and transaction characteristics

There is an abundant literature on the topic of payment economics (Bagnall et al., 2016). Studies focus in particular on identifying the determinants of payment choices, with the aim of informing estimates of future demand for cash. As well as examining the role played by the characteristics of individual payment instruments (security, speed, etc.) or payment environments (network of branches or ATMs, etc.), the literature looks at two other types of determinants: sociodemographic criteria and transaction characteristics (see Table 1).

With regard to the main sociodemographic criteria identified …

publication
Banque de France Bulletin no. 220: Use of cash in France: the payment method of choice for low-value purchases
Download (EN)
Means of payment and currency in circulation