Economic research – How did European companies react to the demand shock during the European sovereign debt crisis? This article attempts to answer this question using two recent studies based on company survey data from 25 European Union countries over the 2010-13 period. The main results of these studies are that firms face downward nominal base wage rigidities, which increase lay-offs when firms have to adjust to a negative demand shock. Moreover, firms preferably use non-base wage components whenever possible, which highlights their role as a shock absorber during this period. The lockdown adopted in almost all European countries due to the Covid-19 pandemic triggered both a demand shock and a supply shock. Consequently, the relationship between employment and wages may be different to what we observed in 2013 for a demand shock. 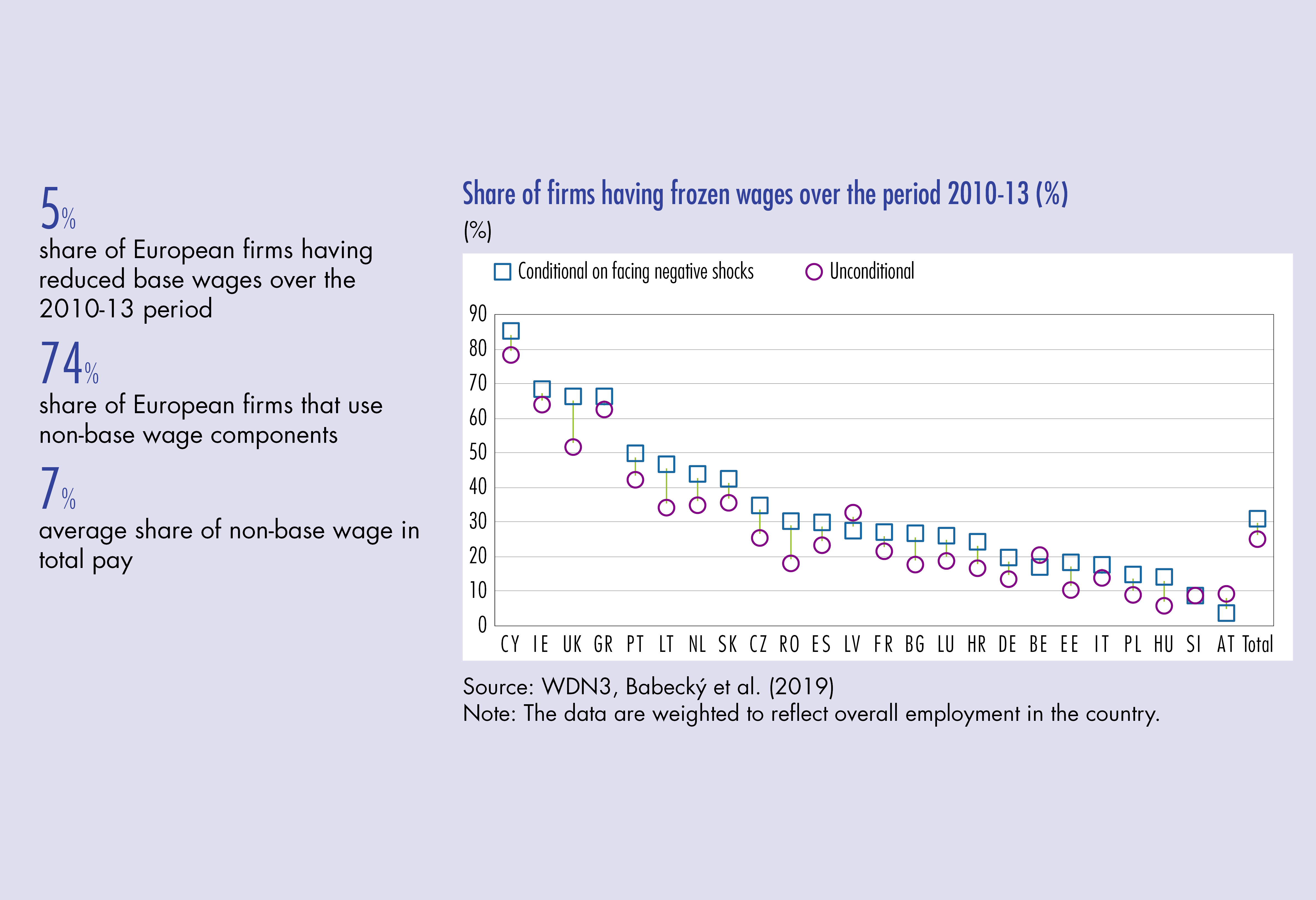 Micro‑level data on wage variations and survey‑based evidence on wage setting have shown that, even in the face of large negative shocks, not only are workers reluctant to accept cuts in their nominal wages, but firms also seem to be unwilling to carry out such cuts. Indeed, it would lower employees’ motivation, reduce productivity and increase resignations (see, for example, Stiglitz, 1974, Solow, 1979, or more recently Du Caju et al., 2015, who use the data from the first wave of the survey discussed in this Bulletin). The degree of downward nominal wage rigidities (DNWR) determines, among other factors, the speed, nature, and cost of firms’ response to economic shocks. However, the relevance of DNWR depends on the levers at firms’ disposal, apart from the base wage, to adjust labour costs when needed. In this regard, firms use different combinations of remuneration and incentive schemes. If base or bargained wages typically feature downward rigidity, firms can also adjust other forms of remuneration — which may be less important or less visible to workers than base wages — to achieve desired adjustments in total labour costs. Reducing employment is also a possible recourse for reducing costs, particularly in the case of DNWR.

A dataset that is particularly well suited to these topics can be drawn from a survey of firms from 25 European Union countries as part of the third wave of the Wage Dynamics Network (WDN). This is a Eurosystem research network set up in 2006 and reactivated in 2013 with the main purpose of assessing labour market adjustments over the 2010‑13 period (see Box). Over this period, EU members experienced a sovereign debt crisis, which affected countries in very diverse ways, all the more so as this crisis followed the Great Recession of 2008.

Indeed, due to the financial crisis, the GDP of European Union members dropped by 4.3% in 2009, with significant differences across countries. While the Baltic countries lost nearly 15% of their GDP, Poland saw an increase of 2.8% and France posted a decrease of only 2.9%. This decline in economic activity resulted in a sharp rise in unemployment, from 7% to roughly 10%, in the euro area. However, the consequences for the labour

markets also differed according to the magnitude of the shock and countries’ institutions. In Germany, where GDP fell by almost 6% in 2009, unemployment decreased by 1 percentage…