Economic research – From 2016 to 2019, the French economy experienced strong employment growth with the creation of over one million market sector jobs in the space of four years. Numerous reforms were implemented over the period which may have contributed to this dynamism: reductions in the cost of labour (the crédit d’impôt pour la compétitivité et l’emploi or CICE in 2013 and the pacte de responsabilité et de solidarité or PRS in 2015), the El Khomri Law in 2016, the executive orders on employment in 2017 and the Pénicaud Law in 2018. This article looks back at the effect of the decline in labour costs using the Banque de France’s forecasting and simulation model for France (FR-BDF). Assuming these measures were fully financed, we estimate that the labour cost reductions brought about by the CICE-PRS led to the creation of nearly 240,000 out of the one million market sector jobs created between end-2015 and end-2019, i.e. 24% of total job creations. This estimate is significantly higher than those published this year by France Stratégie (100,000 jobs in its microeconometric estimate for 2013-16 and 160,000 in its macroeconomic estimate for 2013-17). The difference can mainly be explained by the extended timeframe covered in this article, from 2013 to 2019. This underlines the need to bear in mind that economic policies can take a long time to fully take effect. 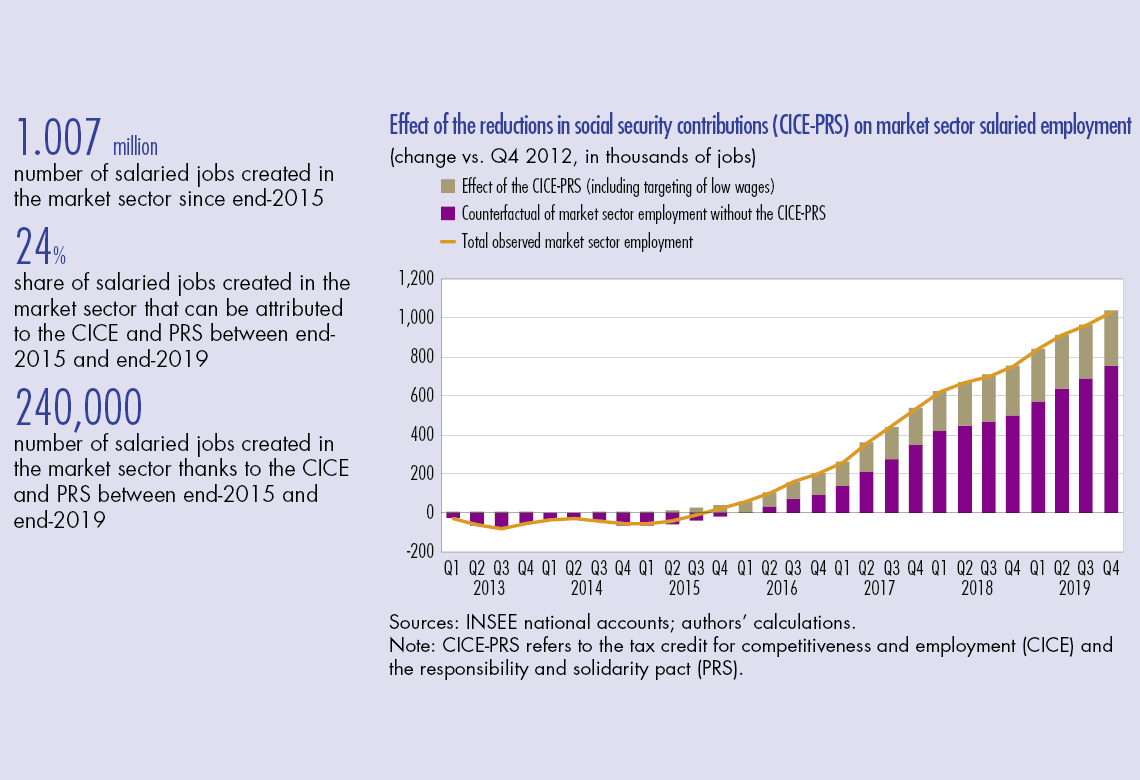 In this article, we examine the extent to which these policies can explain the French economy’s strong performance in terms of employment growth.

However, it is not possible to fully measure the real effects of labour cost reductions on employment simply by analysing these econometric contributions. Cuts to social security charges (CICE-PRS) are not solely reflected in the contribution of real labour costs, as the measures also have an impact on activity and prices. Therefore, to estimate the full impact of the measures, we need to construct a genuine counterfactual scenario where this aid is absent. In addition, the reforms (the…