Banque de France Bulletin no. 224: Article 1 France’s trade in R&D services and in charges for the use of intellectual property: Balances have improved since 2016 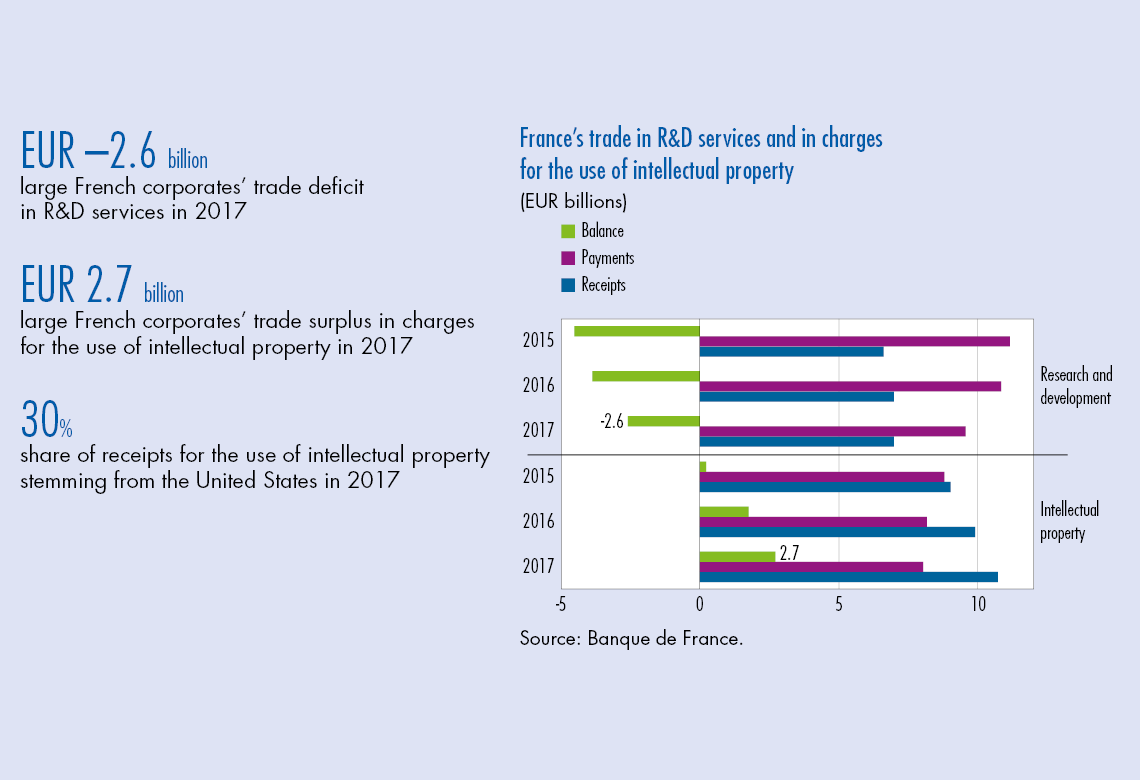 France has a trade deficit in R&D services and a trade surplus in charges for the use of intellectual property. Its trade balances for both service categories (see Box 1 below for definitions) are lower than those of Germany.

A negative balance in R&D services and behind Germany

Large French corporates’ trade balance in R&D services has been negative for the past five years but has been improving since 2016 thanks to an increase in receipts and a decline in payments (see Chart 1).

According to Eurostat data, in 2017 France booked significant R&D-related receipts, but still ranked behind Germany (EUR 11.4 billion of receipts compared with EUR 22.7 billion for Germany, accounting for 4.7% and 8.3% respectively of total services receipts). Its R&D-related payments were also lower than Germany’s (EUR 11.6 billion compared with EUR 20.1 billion, or 5.3% of France’s total payments for services compared with 6.8% for Germany). In addition, gross domestic R&D expenditure amounted to 2.2% of gross domestic product in France in 2017 compared with 3% in Germany. France’s total R&D services trade balance was negative and again lower than Germany’s, at EUR –0.1 billion compared with a surplus of EUR 2.6 billion (see Chart 2). In Europe, France ranks second behind Germany for R&D-related receipts and payments.

In 2017, large French corporates recorded a trade surplus of EUR 2.7 billion in charges for the use of intellectual property. Receipts have been rising steadily since 2013 (see Chart 3). However, in contrast with the majority of its European neighbours, France’s overall balance in this item remains nearly in balance (see Chart 4) as its receipts are lower than for other countries and its payments higher. For example, its 2017 balance in charges for the use of intellectual property was around five times smaller than Germany’s (EUR 1.4 billion and EUR 6.5 billion respectively). Together, these two countries accounted for half of all patents filed by EU countries with the European Patent Office in 2017, although France filed half as many as Germany. France’s total receipts from intellectual property amounted to EUR 14.6 billion in 2017 versus EUR 17.8 billion for Germany, and accounted for 6% of its total services receipts compared with 6.5% for Germany. …

publication
Banque de France Bulletin no. 224: France’s trade in R&D services and in charges for the use of intellectual property: Balances have improved since 2016
Download (EN)
Economy and international financing