The role of prices and other so-called non-price factors, such as quality and brand image, are commonly highlighted in analyses of export competitiveness. However, the increasing internationalisation of production within global value chains reinforces the dependence of export prices on the prices of imported inputs. Taking into account this phenomenon, this bulletin shows that non-resident sectors are a determinant factor in export cost developments, accounting for about three quarters of their growth in France. Thus, in the evolution of competitiveness, domestic factors may weigh comparatively less than external ones, which domestic policies can nevertheless not control. In this context, price competitiveness is decisive for the United States, while non-price competitiveness is more important for China and Spain. As for France and the United Kingdom, both price and non-price effects offset each other. 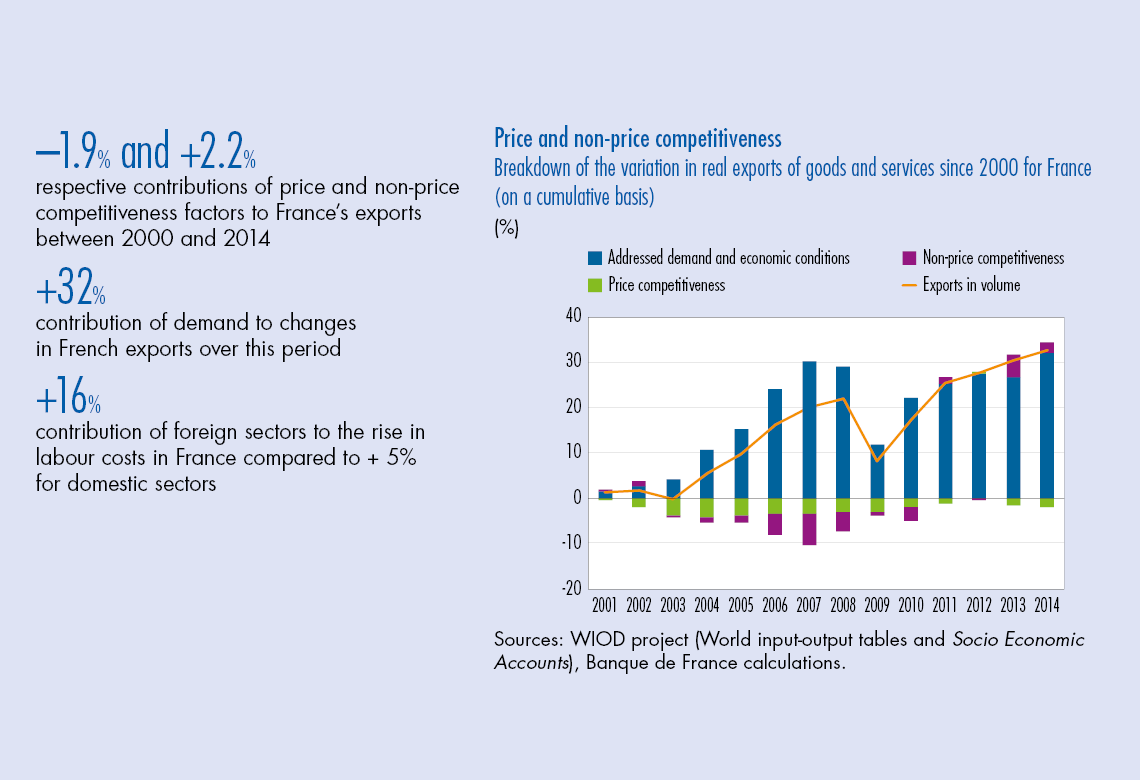 One of the aspects of countries’ competitiveness lies in their ability to acquire, or at least maintain, market shares abroad. For this reason, factors related to price, and therefore mainly to production costs, are important. However, qualitative aspects also come into play, such as product quality, innovation, brand strength, and government-led trade policies (bilateral agreements, etc.). All of these factors related to the ability to export independently of price are commonly referred to as “non-price” competitiveness, as opposed to “price” competitiveness which refers to the ability to export at lower prices than competitors.

The objective of this article is to identify the respective shares of these two factors of competitiveness in the variations in exports of a set of countries. To do this, the methodology used here consists in determining non-price competitiveness from the price factor. The originality lies in the method used to calculate the price factor which takes into account not only the exporting sectors, but also all the sectors that indirectly contribute to exports, whether resident or not.

This approach seems more suited in a context of increasing international fragmentation of production within global value chains (GVCs). As a result, since the 1990s, the share of imported intermediate goods and services (inputs) in the production of exports has increased. The iPhone, for example, designed in California, incorporates various components produced worldwide, which are then assembled in China. The final cost of production therefore depends on the cost variations in all the countries involved in the production chain and is therefore not limited to that of the Chinese industry, which exports the finished product.

The changes that have occurred in France since the 1990s illustrate this phenomenon: the import content in French exports increased from 20% to 30% between 1995 and 2011, while the indirect value added derived from the resident services sectors accounted for 54% of the country’s manufacturing value chain in 2011, up from 45% in 1995 (Cezar et al., 2017).

In view of these transformations, it seems more relevant to take into account in the calculation of the price component of competitiveness the cost variations in all sectors, whether resident or not, which participate downstream (producers of final goods and services) or upstream (input producers) in production within value chains. Yet all these sectors export directly or indirectly: their production costs therefore affect the costs of exports.

Hence, the two price and non-price components of…