Banque de France Bulletin no. 224: Article 4 Why a FOMC member is a hawk or a dove? Ideology and Politics

Economic research – Monetary policy decisions typically arise from the deliberation and vote of a committee. Committees are in a continuous flux as personalities change, preferences change and majorities change. Who sits in these committees and what molds their preference on monetary policy? The authors discuss these questions with regard to the body that decides on monetary policy in the United States, the Federal Open Market Committee (FOMC) of the Federal Reserve. They highlight ideology by education and early life economic experience of the FOMC members that served during the last 55 years. As these members are appointed, authors discuss as well whom politicians choose for the FOMC. 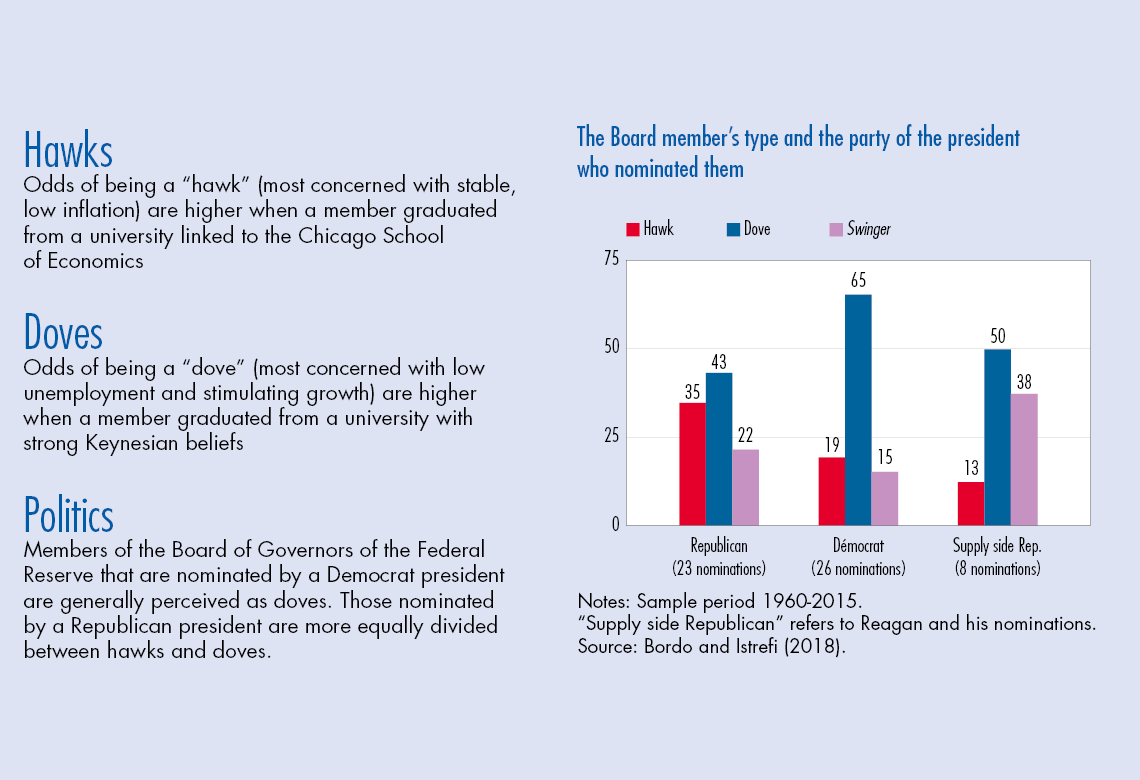 In a recent paper (Bordo and Istrefi 2018) we examined the policy preferences of FOMC1 members, who served from the early 1960s to 2015, in relation to the ideology of who appointed them. We considered both the members of the Board of Governors of the Federal Reserve (Fed) relative to the party of the U.S. presidents, and the Regional Federal Reserve Bank presidents relative to the Board of Directors of the regional Federal Reserve Bank that appointed them. We investigated three types of policymakers: the inflationfighting hawks, the growth-promoting doves and swingers, those members perceived as swinging between the hawkish and dovish camps at the FOMC.

The hawk and dove measure is constructed by Istrefi (2017) and is based on narrative records in U.S. newspapers regarding the policy leanings of FOMC members with respect to the Federal Reserve’s dual mandate. It is compiled for 130 FOMC members who served from the early 1960s to 2015. This measure is based on all the relevant information derived from the policymaker’s backgrounds (origins, education, political preferences and political supporters), their economic beliefs (expressed in writings, testimonies, and speeches) and actions (votes and dissents). About 20,000 articles or reports, from more than 30 newspapers, and referencing 130 members were read (human reading instead of text mining algorithms) to collect quotes that are informative on the policy preference of each member. These quotes are quantified as perceptions for a hawk or a dove, the usual terms that Fed watchers or monetary analysts use to describe these policymakers. Perceptions are traced year by year, for the whole tenure of the FOMC member. Overall, Istrefi (2017) finds that about 39 percent of these members were perceived as all-time hawks, 30 percent as all-time-doves and about 24 percent as swingers (changing type). The rest remained unknown.

The “Partisan theory” of monetary policy first formulated by Hibbs (1977) and supported empirically by Beck (1982), Stein (1985) and Alesina and Sachs (1988), among others, suggests that Democratic administrations prefer “easy” monetary policies and choose doves whereas Republican administrations prefer tightness and thus, choose hawks. Indeed, our analysis shows that Democratic Board nominees have been mostly perceived to be doves during their tenure in the FOMC and very few have been perceived as hawks (see Chart 1a). The share of hawks does appear higher for Republican nominees but a slightly higher share of Republican nominees is also perceived to be doves.

publication
Banque de France Bulletin no. 224: Why a FOMC member is a hawk or a dove? Ideology and Politics
Download (EN)
Economic research