In 2018, overnight deposits reached a record high in France, despite negative real interest rates (-1.7% on average in 2018 for non-financial corporations [NFCs], -1.2% for households). They concentrated 60% of all bank deposits. However, the share of broad money in households’ financial wealth remained stable at around 10%.

Lending is the main source of money creation. In 2018, its growth rate in France exceeded that of the rest of the euro area (5.8% for household housing, 6.4% for NFCs, compared to 3.6% and 3.9% respectively in the euro area).

Since mid-2014, NFC and household lending and deposit rates have converged downward in France and the euro area. 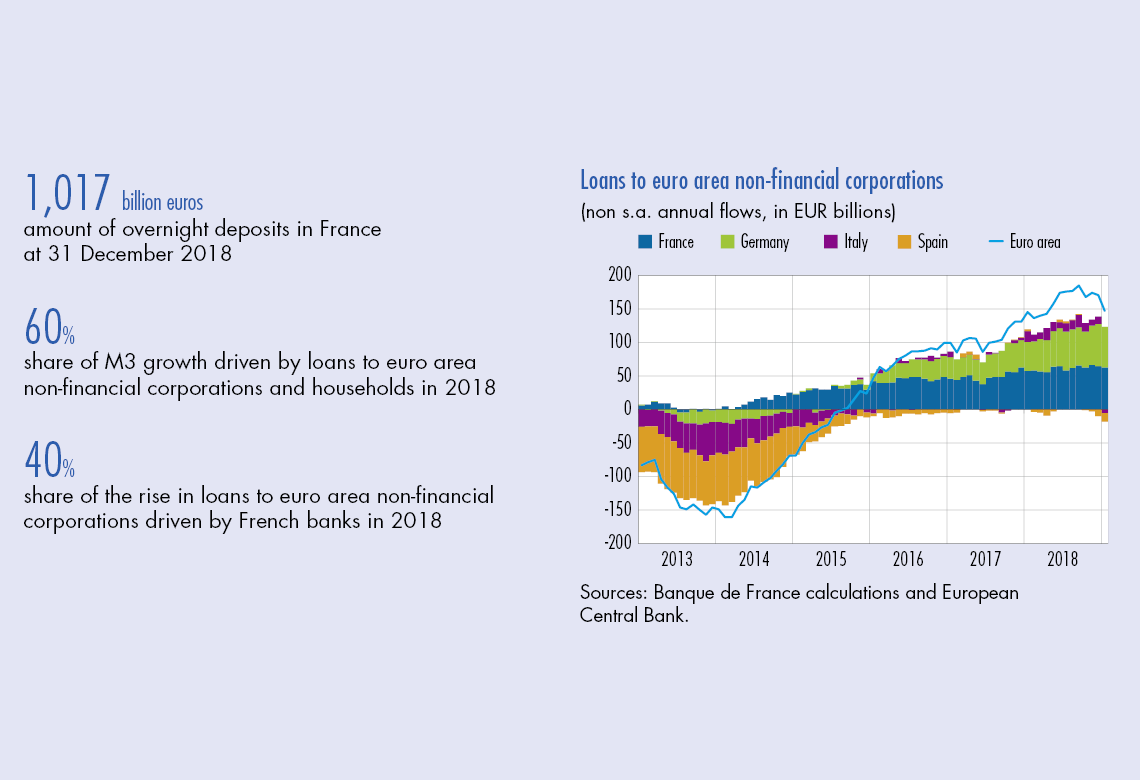 In 2018, the annual growth of money supply in the euro area (M3 aggregate: up 4.1%) was, once again, driven by the dynamism of overnight deposits (up 6.9%). This trend was even more pronounced in France, with an 8.5% growth rate in overnight deposits, slightly down on 2017.

Overnight deposits reached a record high in France in December 2018

In France, outstanding overnight deposits amounted to EUR 1,017 billion at 31 December 2018 (about half of GDP in 2018). Growth in overnight deposits is the cause of the acceleration in the French component of the broad money aggregate observed since 2015 (see Chart 1). From 2015 (beginning of the European Central Bank’s quantitative easing) to end-2018, the average contribution of overnight deposits to M3 growth amounted to 4.5%, almost three times the pace observed during the previous decade (1.6% on average between 2005 and 2014).

Since 2015, French non-financial corporations (NFCs) have accounted for 53% of overnight deposits, and households for 42% (see Chart 2).

Economic agents show a preference for the most liquid savings

The rise in the share of M1 in the M3 aggregate (see Chart 3) reflects economic agents’ stronger preference for liquid savings.

At the same time, the share of banknotes and coins in M1 decreased until 2017 and now stands at around 14% in the euro area and 17% in France (see Chart 41). This share reflects not only the rise in electronic payment technologies, in particular contactless payment for small purchases (introduced in France from 2014), but also the persistent use of banknotes and the high degree of user confidence in this payment instrument.

The dynamism of overnight deposits…