Banque de France Bulletin no. 229: Article 1 Funding shock: how will the investment of large French firms be affected?

Economic research – This article studies the impact of the negative funding shocks of 2008 and 2011 on the investment of large French groups. We compare companies rolling over their maturing debt in times of crisis with those which did not have to do so. After isolating the effects related to the business cycle and to firms’ characteristics, it appears that the 2008 financial crisis reduced firms’ investment rate by about four percentage points. The sovereign debt crisis of 2011, for its part, does not appear to have affected the average firm. This is partly because of the beneficial effect of the non standard monetary policy measures of 2012 aimed at restoring the bank lending channel. In the context of the current crisis, which is of a different nature, the credit channel plays an important role in supporting economic activity: this is the purpose of the emergency measures recently taken by the ECB and, in France, by the government. 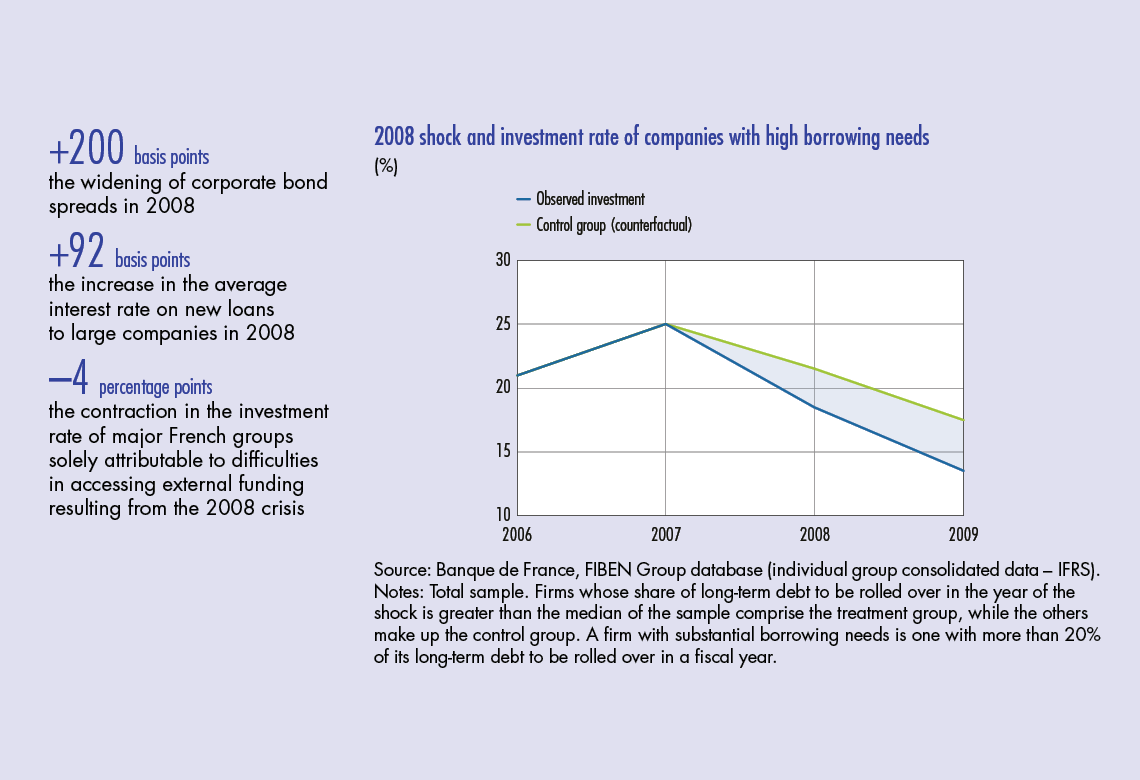 1 How can fluctuations in business investment in France be explained?

At the macroeconomic level, the gross investment rate of non financial corporations (NFCs), measured as the ratio of their gross fixed capital formation (GFCF) to GDP, is subject to significant cyclical fluctuations. Over the past 15 years, two major shocks have affected this ratio: the financial crisis of 2008 and the sovereign debt crisis of 2011. The impact of the 2008 crisis is notable for its magnitude: the gross investment rate of NFCs fell by more than one percentage point between the beginning of 2008 and the end of 2009, from 12.1% to less than 11%. Admittedly, the pre 2007 investment rate was relatively high, i.e. slightly above its long term average, but still below its 2000 or 1990 level. The 2011 crisis had a smaller impact on investment, with a decline of around 0.3 percentage point in the gross investment rate of NFCs between the last quarter of 2011 and the beginning of 2013, but this impact was particularly persistent (see Chart 1).

Using a microeconomic approach, this article seeks to quantify the causal impact of financing conditions on the investment of large French companies. To this end, we identify certain characteristics of companies – related to the management of their liabilities – that influence the sensitivity of the investment response to fluctuations in the supply of financing, in our case to a contraction in supply. To do so, we study the crisis episodes of autumn 2008 and winter 2011, which were shocks that were exogenous to the economic position of French companies. We draw on the methodology used by Almeida, Campello, Laranjeira, and Weisbenner (2009) and compare the investment behaviour of firms, before and after each shock, in terms of the share of long term debt they had…