Against a backdrop of persistently low interest rates, the French residential real estate market proved extremely dynamic in 2018. Total outstanding housing loans exceeded the EUR 1,000 billion mark at the end of the year.

Due to the structural features of the French market (preponderance of fixed-rate and guaranteed loans), credit risk remains limited. Nonetheless, lending standards have gradually been eased and in some cases are back in line with the levels observed in 2007-08. This is contributing to the rise in borrowing, and helping to push prices up faster than household income. The easing of lending standards concerns all categories of borrower. However, given that a high share of new loans are to borrowers who already own property and who have higher earnings and financial resources, the risks appear to be contained, as demonstrated by the low rate of loan delinquencies.

The easing of lending standards and trajectory of household indebtedness raise concerns as to the sustainability of recent developments. As a result, the Autorité de contrôle prudentiel et de resolution (ACPR – Prudential Supervision and Resolution Authority) and Banque de France are keeping a close eye on the risks linked to the financing of the residential real estate market. 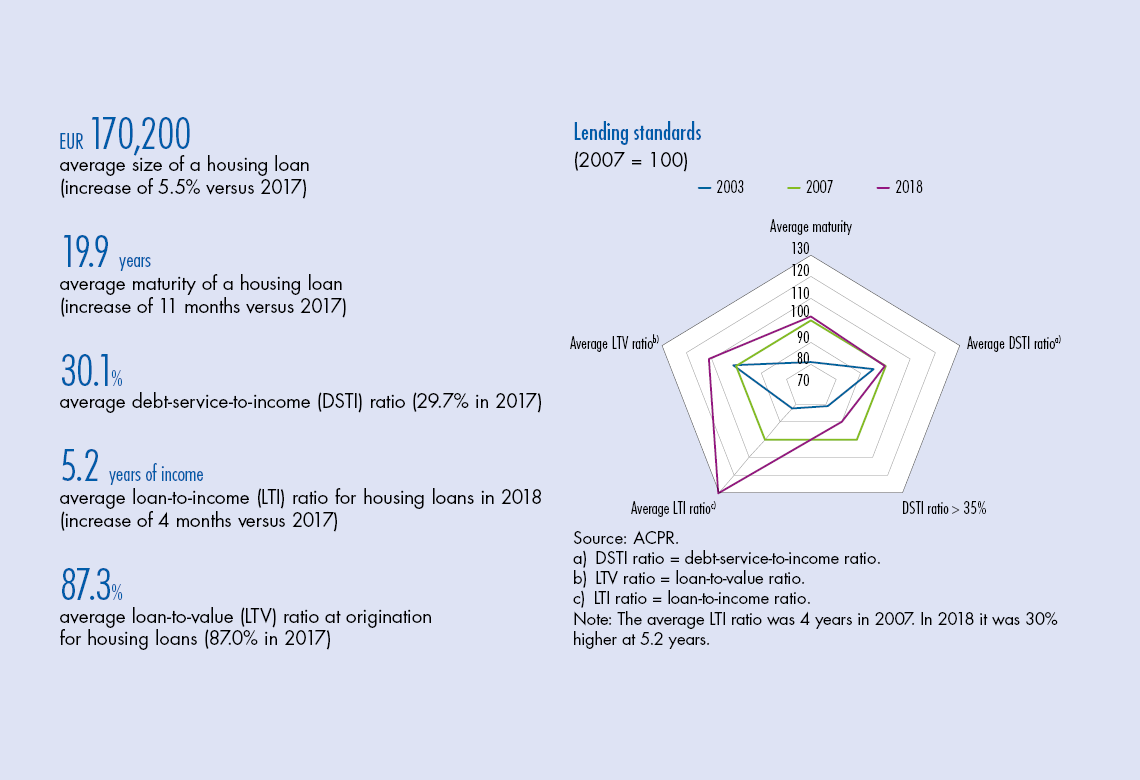 Buoyed by historically low interest rates, levels of debt in the private non-financial sector remain high in France. Household debt in particular has risen steadily since the start of the 2000s, and as at 31 December 2018 was equivalent to 70% of GDP. The increase observed since the crisis contrasts starkly with the stabilization or decline generally seen in the main neighbouring European economies.

In the residential real estate market in particular, 2018 proved to be another very dynamic year: the number of transactions hit an all-time high of 970,000, well above the average of 788,000 observed since 2000, and the Notaries-INSEE second-hand dwellings price index rose by 3.2% in mainland France (rises of 4.2% in the Île de France region and of 2.8% in the rest of France).

2 The structural features of the market limit the risk of household defaults, despite the easing of lending standards

In the residential real estate market, French banks continue to lend almost exclusively at fixed interest rates (98.5% of new lending in 2018), thereby limiting the risks to households of a possible rise in rates. In addition, nearly all of these loans (96.9%) are backed by some form of surety, mortgage lien or guarantee, which limits the loss incurred by the bank in the event of a borrower default. Unlike in other countries, French banks also have a policy of granting loans based on the borrower’s solvency (which is notably measured using the debt‑service-to‑income (DSTI) ratio) and not on the value of the property.

Nevertheless, the issue of changes in lending standards is still of crucial importance: the gradual easing of certain standards is in part behind the current strength of the home lending market, in a context where house prices are rising faster than household income. In addition, the decline…

Article 1 : A new Banque de France Financial Conditions Index for the euro area
Article 2 : Population ageing: how does it impact the macroeconomy?
Article 3 : Home lending standards have returned to 2007-08 levels