Banque de France Bulletin no. 223: Article 2 Population ageing: how does it impact the macroeconomy?

This article quantifies the impact of past and future demographic change on real interest rates, house prices and household debt in a calibrated overlapping-generations model. Falling birth and death rates across advanced economies can explain a large part of the fall in world real interest rates and the rise in house prices and household debt observed since the 1980s. Since households tend to maintain relatively high wealth levels throughout their retirements, these trends will persist as the population continues to age. Countries that age relatively slowly, like the United States, will see their net foreign liability position grow. The availability of housing as a store of value attenuates these trends, while raising the retirement age has limited effects. 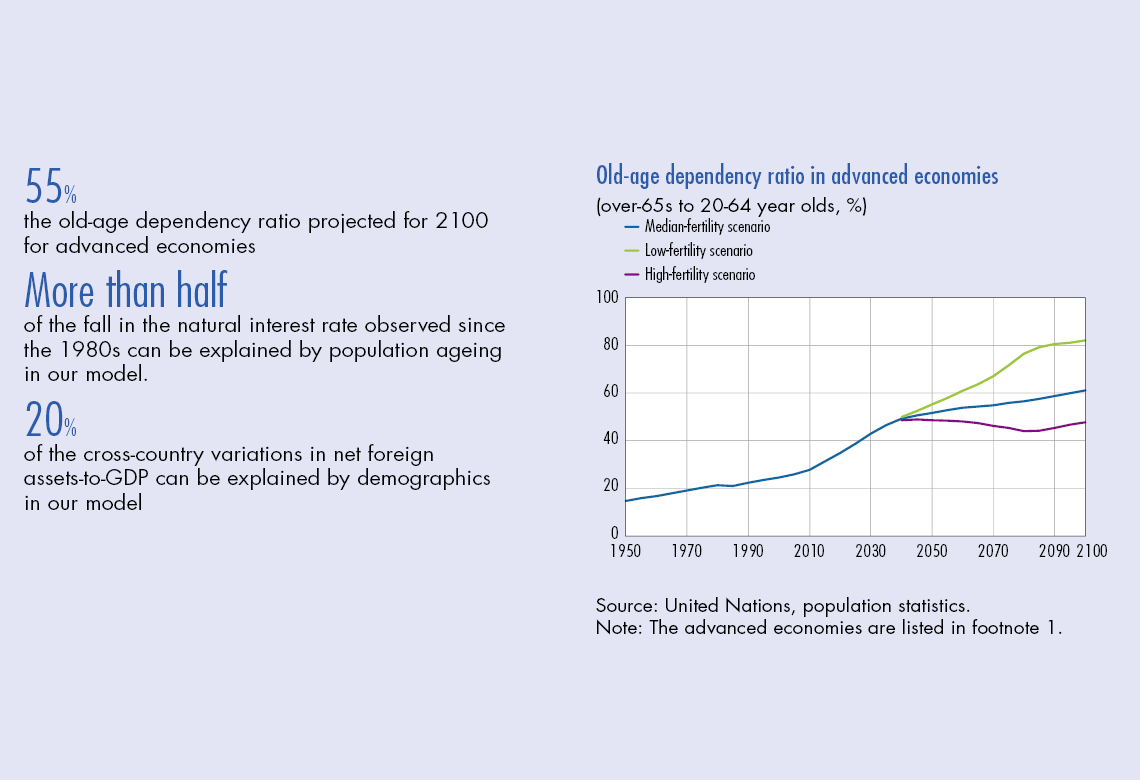 The population of advanced countries has aged rapidly over the past half‑century, with life expectancy and the old‑age dependency ratio having already reached unprecedented highs and projected to continue to rise for several decades. At the same time, long‑term real interest rates have been on a downward trend, while house prices and household debt have risen dramatically. This paper quantifies the link between these important trends and examines the wider macroeconomic implications of demographic change using an overlapping‑generations model calibrated for 23 advanced economies.

1 Population ageing over the past fifty years

The old‑age dependency ratio (henceforth OADR), defined as the ratio of over‑65s to 20‑64 year olds, is a convenient way of summarising demographic evolution. Focusing on advanced economies, the observed and United Nations’ predicted OADR increases from around 15% in 1950 to over 40% in 2100 if assuming a high fertility scenario, and up to 55% in the medium‑fertility scenario (see Chart 1).

An explanation often mentioned for the ageing of the population is the baby boom: as the large baby‑boom cohorts grow old, the age distribution becomes skewed towards the older age groups. This is amplified by the smaller size of the younger generations entering the population as birth rates have declined. Nonetheless, being essentially a transitory phenomenon, the baby boom cannot account for the long‑run trend in the OADR. Indeed, OADR predictions keep increasing once the baby‑boom cohorts have faded out of the population, say after 2050. Instead, the key determinant of the rise in the OADR is increasing longevity. While a sixty year old in 1950 would not expect to live past the age of 77, by 2015 a sixty year old can expect to live until close to 85. By the end of the century this number rises past 90. As people face lower mortality rates later in life, and their life expectancy rises, older age groups account for a growing proportion of the total population.

To uncover the macroeconomic effects of ageing, we use the general equilibrium overlapping‑generations model detailed in the box below. We introduce demographic change as observed in the data in terms of cohort size and death probabilities and we solve for the transition path of the economy, assuming perfect…

Article 1 : A new Banque de France Financial Conditions Index for the euro area
Article 2 : Population ageing: how does it impact the macroeconomy?
Article 3 : Home lending standards have returned to 2007-08 levels