Banque de France Bulletin no. 234: Article 2 Money and its counterparts: instruments and reflections of monetary policy

Crisis periods, such as the Covid-19 pandemic, represent major shocks to growth and inflation and are characterised by a high degree of uncertainty. In the face of such events, it is essential to draw on a broad set of indicators to guide monetary policy decisions. Although it is not assigned a key role, the analysis of monetary aggregates and the central bank’s balance sheet is probably the oldest component. This article therefore recalls the definition of monetary aggregates and the main factors influencing their developments. It then provides the main empirical regularities on money and the central bank’s balance sheet. Lastly, it shows that while analysing the relationship between money and its counterparts is not intended to directly guide central banks’ decisions, it does help to make the many different analytical approaches more consistent. 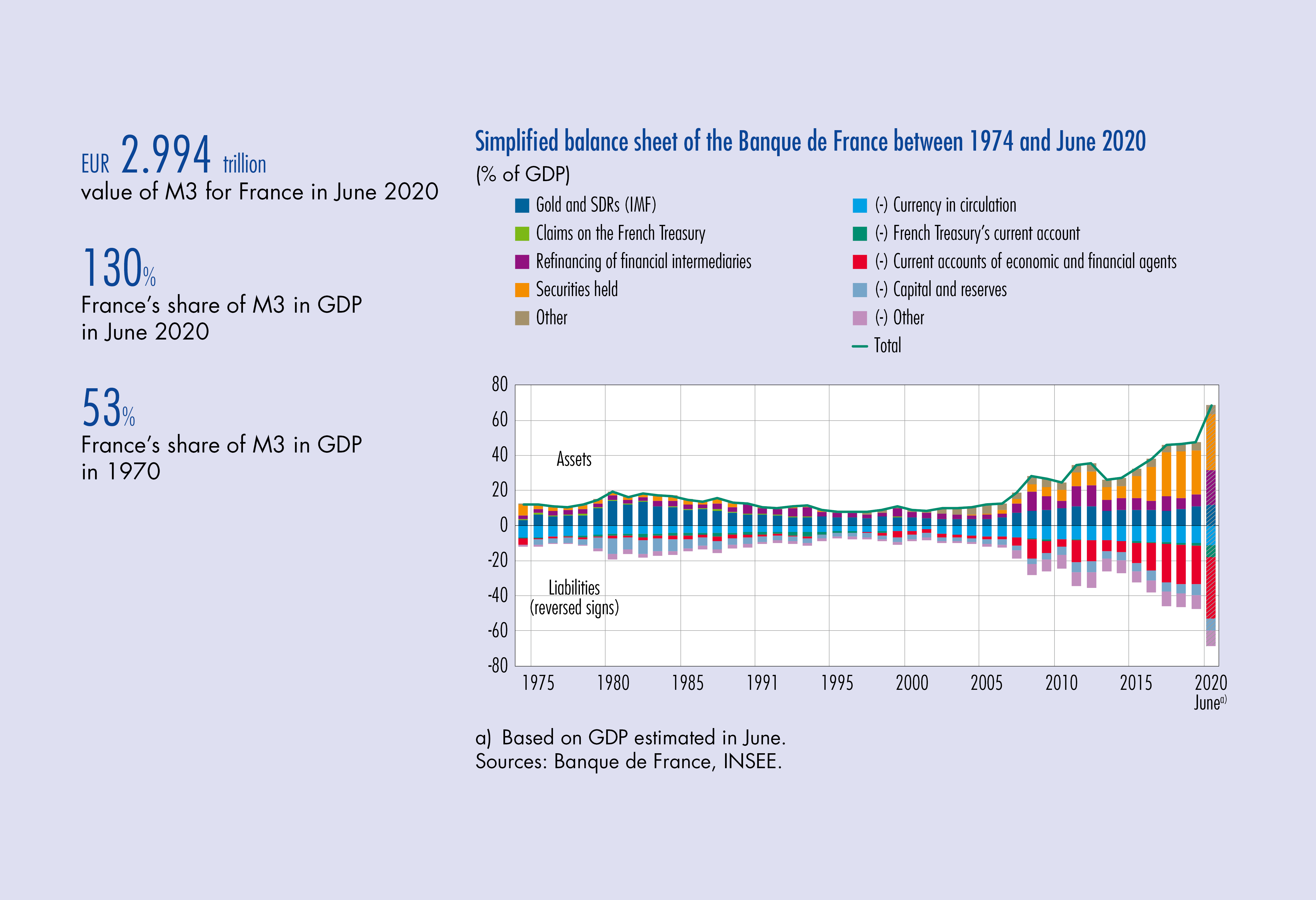 Since 1970, the development of money aggregates, from the franc to the euro, has reflected the inflation cycle, monetary stability and financial innovation

While the nature of money, and what distinguishes it from other forms of wealth, is universal, its precise definition is very much linked to the characteristics of the countries that issue it. For instance, in order to establish the euro area, the European Monetary Institute (EMI), in cooperation with the national central banks, defined a common framework for the implementation of monetary policy based on a harmonised definition of the sectors issuing and holding money (see box). The money supply is measured by restating and consolidating the balance sheets of money issuers (monetary financial
institutions – MFIs).

There are two forms of money (see Chart 1).

• The monetary aggregates M1, M2 and M3 which describe and rank, in descending order of liquidity, the money held by the public. More precisely, money is held by all economic agents (households, companies, general government, the rest of the world), while commercial banks are the issuers of money. The monetary policy measures taken by central banks since the 2008 crisis have resulted in faster money creation by commercial banks, and thus an acceleration in the growth of the money supply (M3)/GDP ratio (see Table 1).

• The monetary base, also known as the central bank money, is the primary form of money into which other forms of money can be converted. It has a privileged  status in the monetary system, since it not only contributes to the money supply with cash (banknotes and coins), but also allows commercial banks to easily create cashless money on their customers’ accounts, in accordance with the adage that “loans make deposits”.

The rapidly evolving technology of payment systems does not call into question the fundamental principles of aggregates, or even the monetary principle. Traditional means of payment (cheques, payment cards, credit transfers, etc.) allow cashless money to circulate. Electronic money institutions (EMIs), considered to be MFIs, and electronic money issuers, contribute to overnight deposits and hence to the money supply.

Monetary aggregates have shown to be robust in the face of changing payment patterns. In particular, the framework for monetary statistics is revised every five years by the ECB, without calling into question the stability of the underlying concepts, to reflect changes in economic conditions and recent financial…