A genuine European safe asset would have several benefits for financial stability and European integration and would facilitate the financing of public policies by reducing borrowing costs. Many proposals aim at creating a European safe asset, often backed by national sovereign debt. These proposals are complex to implement: in addition to political issues, legal constraints complicate their adoption, and the determinants of the associated borrowing costs remain uncertain. The European Union’s measures in response to the Covid-19 crisis are fostering the emergence of a new supply of supranational debt to help Member States meet the challenges posed not only by the health crisis, but also by global warming and technological transition. While this new supply of safe assets is temporary and still limited compared to other currency areas, it nevertheless constitutes an important step for the European bond landscape due to its critical mass effect, which reduces liquidity risk. 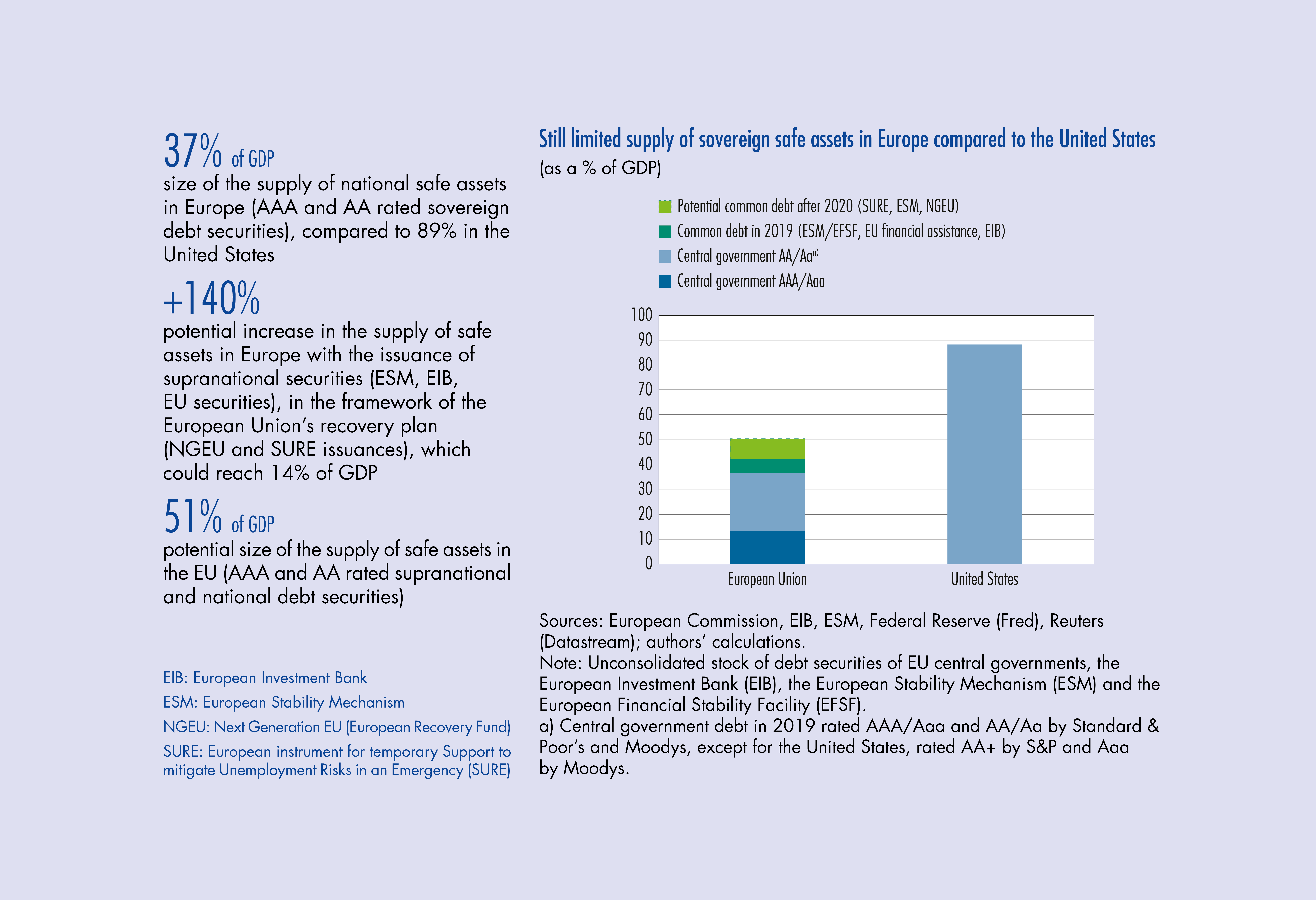 While the United States has Treasury securities, which are universally regarded as a safe and liquid asset, this is not the case in the euro area. Such an asset issued at the supranational level would however have a number of benefits for financial stability and integration (see the work of the European Systemic Risk Board’s high-level task force [2018] chaired by Philip Lane, then Governor of the Central Bank of Ireland). While the creation of the United States of America was accompanied by a mutualisation of the federated states’ debts under the impetus of the Treasury Secretary Alexander Hamilton in 1790, European construction followed a different path. The Maastricht Treaty (1992), in creating the Economic and Monetary Union (EMU), only provides for close coordination of national fiscal policies. It prohibits any mutualisation of existing debts and does not provide for any significant fiscal capacity or joint borrowing capacity at the European level. De facto, the bulk of current European safe assets are the highest rated national sovereign debts, such as the German Bund and the French OAT. Safe asset quality is linked to the perceived absence of credit risk. In this regard, a debt is considered safe if it is issued or guaranteed by a government that is itself considered “safe“, so that repayment appears certain in the eyes of investors (Golec and Perotti, 2017). However, the notion of a safe asset can be ambiguous, even more so in the case of a monetary union, because, according to EU capital requirements regulations – and Basel standards –, exposures to Member States’ central governments expressed and funded in domestic currency may be exempt from capital requirements, regardless of the underlying risk.

However, in the aftermath of the 2008 crisis, the sovereign debt crisis that hit the euro area in 2010 highlighted the inherent fragility of the European framework in this respect. The absence of genuine European safe assets was apparent during the speculative attacks by financial markets on securities of the most fragile countries. By differentiating between sovereign debts of these countries and others who were considered safer, markets caused a contagion effect within the euro area, in particular within the “GIPS“ countries. These countries sometimes had to face debt refinancing…