Banque de France Bulletin no. 234: Article 7 What explains the persistent weakness of euro area inflation since 2013?

Annual inflation in the euro area, as measured by the Harmonised Index of Consumer Prices (HICP), fell by an average of 1.1 percentage points between the period 1999 2007, which preceded the financial crisis, and the period 2013 19 which followed it. In this bulletin, the authors evaluate the contributions to this decline of two standard determinants of inflation: economic slack and the trend in commodity prices, especially oil prices. To do so, they use an augmented Phillips curve that incorporates these determinants as well as the impact of the non standard monetary policy measures implemented since 2014. The authors show that the bulk of the decline in inflation can be explained by the disinflationary nature of the two determinants since 2013. Their average contribution to the decline is at least 1 percentage point, of which 0.25 percentage point is offset by the non standard monetary policy measures. The unexplained part of the average decline in inflation is at most 0.3 percentage point. 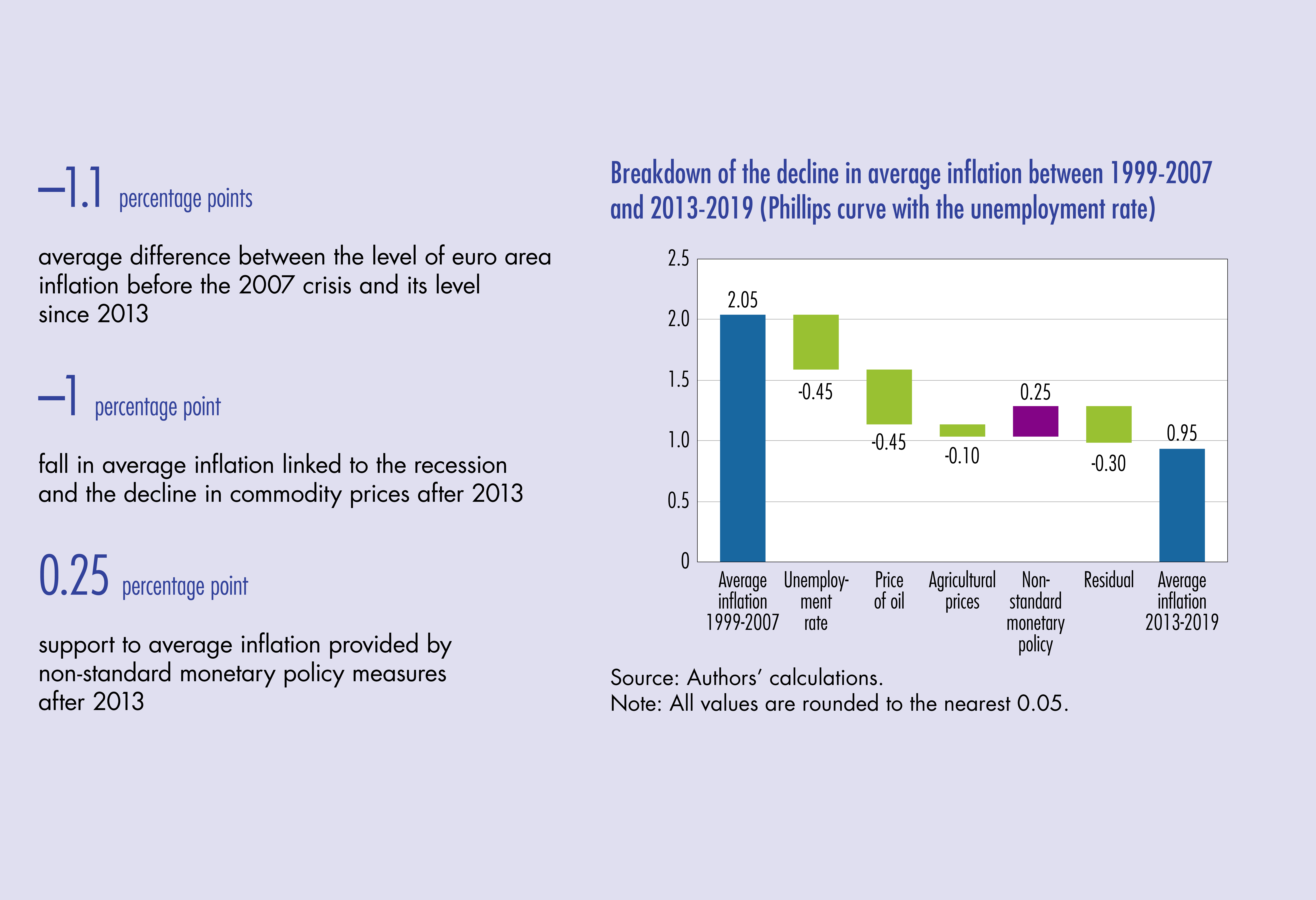 The persistent weakness in inflation since the 2008 financial crisis is one of the most striking macroeconomic developments in the euro area. Inflation, as measured by the annual change in the Harmonised Index of Consumer Prices (HICP), has declined from an average of 2.1% in the period 1999 2007 to an average of 1.0% for the period 2013 19 (see Chart 1). This fall of 1.1 percentage points in average terms between the pre  and post crisis periods has sparked a renewed debate over the determinants of price setting. In addition to the usual macroeconomic drivers, some analyses suggest that structural changes, related for example to the globalisation and digitalisation of our economies, may also be playing a role.

This article proposes a simple decomposition of the fall in average euro area inflation since the crisis, making it possible to quantify the role played by the standard determinants used in existing models, and to identify possible new determinants that may need to be studied
in greater depth. The authors use an augmented Phillips curve that incorporates commodity prices (including the indirect effect of oil prices on the production cost of goods and services), along with the impact of the non standard monetary policy measures implemented since 2014, i.e. asset purchases and negative interest rates.

The findings suggest that the bulk of the inflation decline is due (i) to the increase in economic slack after the double dip recession suffered by the euro area between 2008 and 2012, and (ii) to the fall in the price of commodities, especially oil, after the sharp rise observed in the 2000s. These two disinflationary factors are found to have lowered annual inflation by an average of at least 1 percentage point since the
crisis, although 0.25 percentage point of this impact has been offset by non standard monetary policy measures. The unexplained portion of the 1.1 percentage point decline in inflation therefore amounts to close to 0.3 percentage point, and is concentrated in recent years. In addition to the structural factors described above, the fall in inflation may also reflect a drift of long run inflation expectations, the impact of the euro’s appreciation in 2017 and 2018, and the compression of profit margins in the services sector that has absorbed the wage rises since 2017.