Banque de France Bulletin no. 232: Article 3 Banks from 2008 to 2019: net income affected by a fall in intermediation margins but lower provisions

The onset of persistently low interest rates in the euro area during the decade 2008 2019 impacted the accounts of financial intermediaries, as monetary policy measures supported demand for credit and led to an increase in the size of the balance sheets of both commercial banks and the Banque de France. The increase in the volume of loans did not, however, offset the fall in interest rates; the result of these two opposing developments was to squeeze intermediation margins. Banking intermediation has therefore become less profitable, and the banking sector now creates less value added. However, the contraction in intermediation margins was not reflected in the banking sector’s net income, which was stable over the period 2015 2019, due in particular to the effects of the fall in provisions and the appreciation of assets – with highly accommodative monetary policy as a contributing factor. 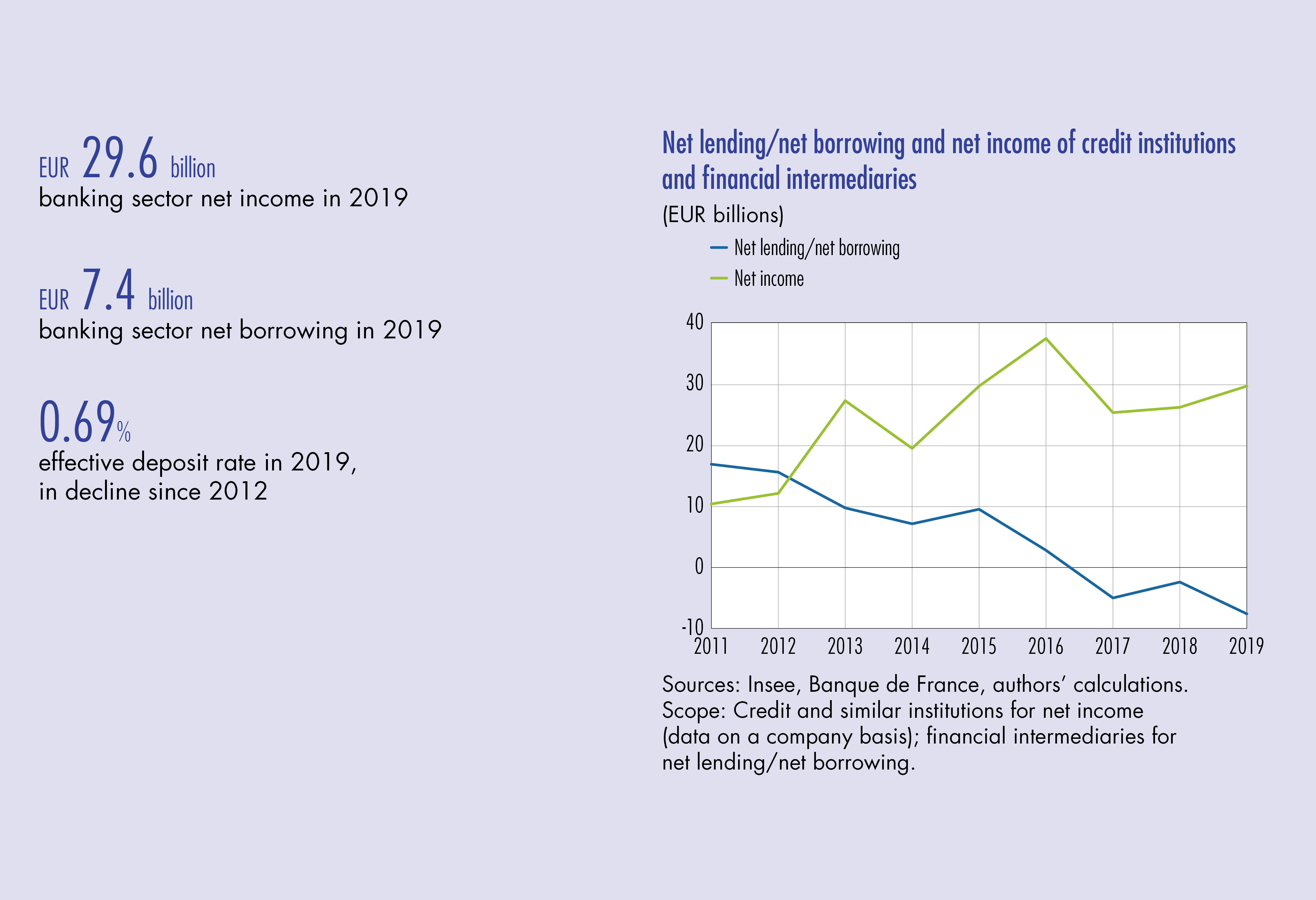 Fall in the natural rate of interest

The main objective assigned to the Eurosystem (see definitions in Appendix 1), under the mandate given by European governments, is price stability. This is understood as a level of medium term inflation below, but close to, 2% throughout the euro area. In order to achieve its inflation target, the Eurosystem ensures that favourable financial conditions are maintained, which may lead the central bank to keep its key interest rates at low levels over the long term. However, to appreciate why real interest rates are low, we must first consider the concept of the natural, or “neutral” rate of interest: this is the real interest rate that equates savings and investment in an environment of full employment and price stability. The various estimates of natural interest rates across the world show that they have fallen steadily since the 1980s to a historically low level today. In the long term, the natural interest rate trend follows that of structural factors such as working population growth or changes in total factor productivity. These factors are not the result of central bank action, but do affect the conduct of monetary policy. Indeed, a low natural interest rate limits the ability of central banks to continue to lower their policy rates, which is why the monetary authorities intervened following the 2008 crisis and the slowdown of the real economy, using both key interest rates and unconventional monetary policy tools (see Appendix 2).

The rate on main refinancing operations for banks fell from 4.25% in summer 2008 to 1% in May 2009 and then to 0% in 2016 − and has since remained at this level. At the same time, the deposit facility rate, which remunerates banks’ reserves at the central bank, fell into negative territory in June 2014 and has stood at –0.5% since January 2019. Long term rates are also lower: while the rate on ten year swaps on Eonia (the Euro Overnight Index Average for interbank lending) was above 4.5% in summer 2008, by January 2020 it had dipped below zero. Short term and long term interest rates have therefore fallen in tandem (see chart 1).

Reserves that banks hold over and above minimum reserves are placed in deposit accounts that the credit institutions open at the central bank. Most of…