Banque de France Bulletin no. 232: Article 4 Despite the decline in the use of cash, it remains the most widely used means of payment in France

In 2019, the European Central Bank (ECB) updated its survey on household payment attitudes in the euro area. As in the previous survey (2016), it appears that cash remains the preferred means of payment in number terms for day-to-day purchases. However, there has been a growing preference for card use, particularly contactless payments, accentuated by the Covid-19 health crisis.

The decline in the use of cash in transactions is expected to continue in favour of digital payments. Nevertheless, cash will not cease to be used.

The Banque de France will continue to ensure adequate access to cash for all and respect for its legal tender – i.e. preventing merchants from refusing cash payments – as part of consumers’ freedom to choose their means of payment. 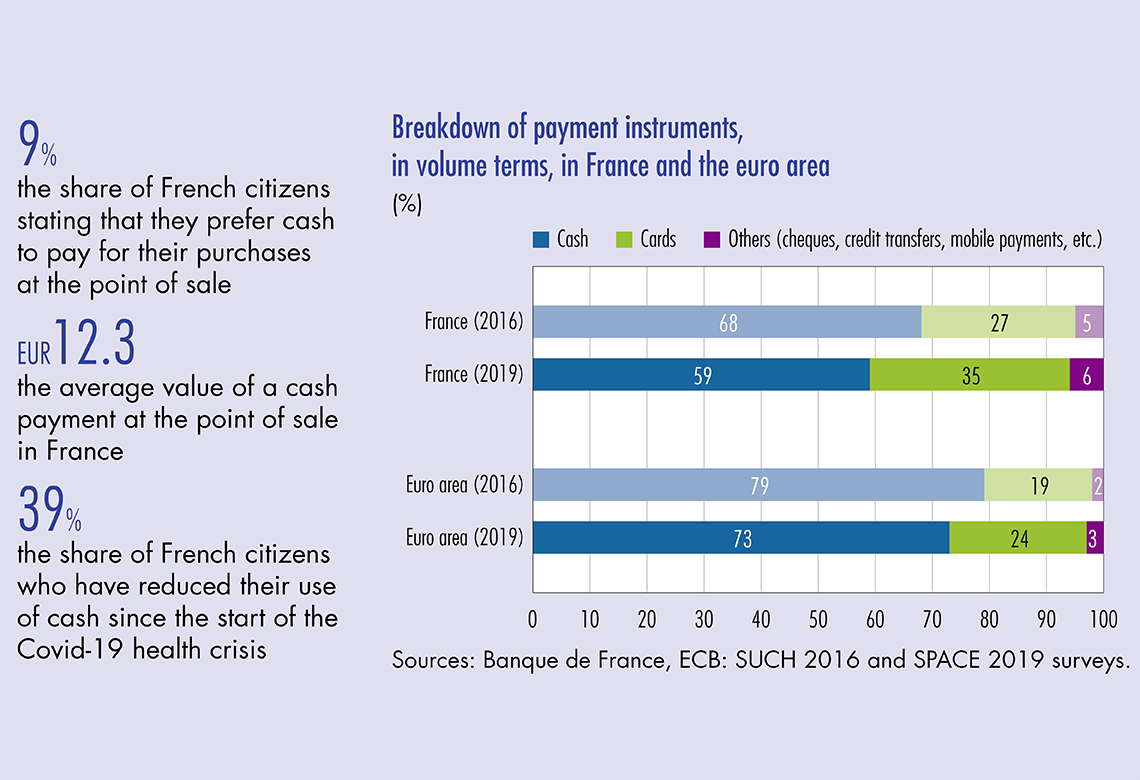 1 In 2019, French citizens still preferred to use cash for everyday purchases, despite a growing preference for card payments

According to the SPACE (study on the payment attitudes of consumers in the euro area) survey, in 2019 cash remained the most widely used means of payment in France (and in the Eurosystem) both at the point of sale and from person to person: its share stood at 59% in France (73% in the euro area), while card payments accounted for only 35% of transactions (24% in the euro area).

Like in the previous survey conducted in 2016 (SUCH survey), cash remained the most popular means of payment (see Chart 1a). However, it fell sharply (by nine percentage points in three years in France) in favour of card payments, whose share increased (up eight percentage points over the same period), driven by contactless payments, which now account for 38% of card transactions in France.

Overall, as in 2016, France is one of the euro area countries that uses the least amount of cash, in value terms, along with the Netherlands, Luxembourg, Belgium, Finland and Estonia.

The decline in cash use can also be seen across the euro area as a whole, where on average it has fallen below the symbolic threshold of 50% of payments in value terms.

Cash payments have traditionally been used for small day to day purchases (see Chart 4): 92% of payments under EUR 5 are settled in cash in the euro area. The fact that the average amount of cash payments in France has almost doubled in three years (from EUR 7.5 in 2016 to EUR 12.3 in 2019) shows that competition from contactless payments in this segment of very…

publication
Banque de France Bulletin no. 232: Despite the decline in the use of cash, it remains the most widely used means of payment in France
Download (EN)