Banque de France Bulletin no. 232: Article 8 The link between money and inflation since 2008

The unconventional monetary policies implemented by central banks in the wake of the 2008 financial crisis, and subsequently in that of the Covid-19 health crisis, have led to a faster increase in money than in prices, prompting a review of the link between the two. This article recalls in the first two parts the concepts linking money and inflation, i.e. the money multiplier and the velocity of circulation of money, using the cases of the euro area and the United States as examples. Part three shows that while the link between money and inflation is preserved in the long run, consistent with the quantitative theory of money, it has become significantly distorted in the recent period. One reason for this disconnect in the shorter term is that unconventional monetary policies do not act on inflation via the money multiplier and the quantity of money in circulation, but by lowering long-term interest rates and financing conditions for households and businesses. They have thus made it possible to avoid episodes of deflation, and inflation would have been significantly lower without them. 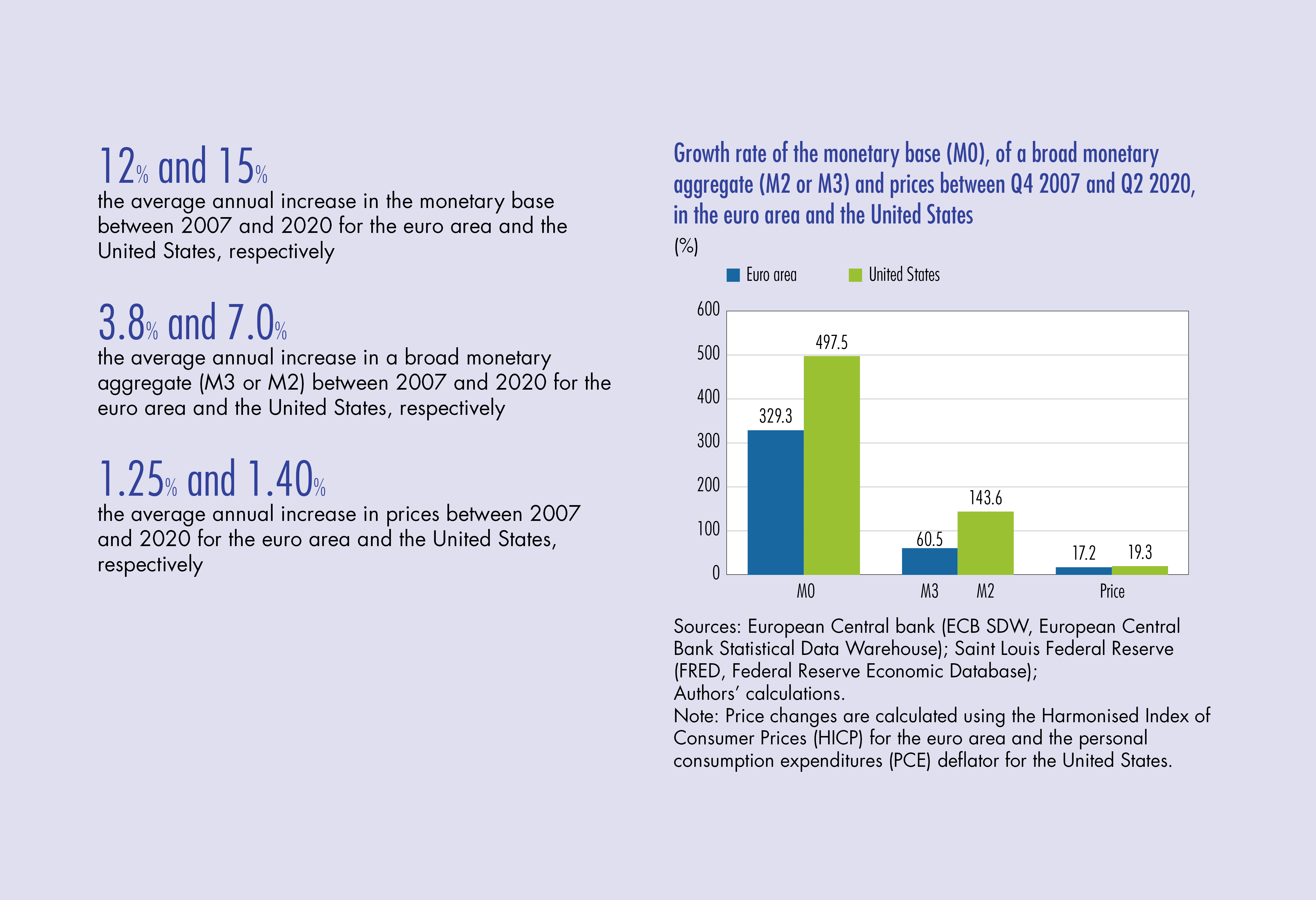 Monetary issues are among the most discussed topics among economists, generating a wealth of academic literature. From David Hume to Robert Lucas, different schools of thought have competed to attempt to shed light on the determinants of monetary dynamics, while empirical research has failed to resolve the debate. For example, the question of monetary neutrality has returned to the fore (Benati, Lucas, Nicolini and Weber, 2020) given that the increase in the money supply has not been accompanied by a corresponding rise in the level of prices since 2008.

At a time when assets are emerging that aim to compete with legal tender (local currencies and crypto-assets; Pfister, 2020), the question of how to manage the various monetary aggregates of central banks has become increasingly important.

In the wake of the financial crisis of 2007-2008, major central banks, in particular the European Central Bank (ECB) and the Federal Reserve (Fed), adopted unconventional monetary policy measures (asset purchases, liquidity injections, forward guidance, etc.) to ward off the risks of deflation (Pfister and Sahuc, 2020). These policies have sometimes been criticised, with central banks being accused of significantly inflating their balance sheets, thus increasing the money supply, and paving the way for a sharp rise in future price levels. These criticisms are mainly based on the traditional quantitative argument that a high level of liquidity could lead to rapid credit creation and, ultimately, an increase in inflation that would jeopardise the price stability mandate of central banks.

However, since the introduction of these policies, there has been no surge in inflation, as shown in Chart 1 for the euro area and the United States. The relationship between money and inflation therefore needs to be re-examined. Is it evolving and if so how and why?

We will start by recalling the concepts linking money and inflation, i.e. the money multiplier and the velocity of money, using the cases of the euro area and the United States as examples. We will then show that while the link between money and inflation is preserved in the long term, in line with the quantitative theory of money, it has become significantly distorted in recent times, particularly due to these unconventional monetary policy measures, which act through channels other than the quantity of money itself.

1 Unconventional monetary policies and the money supply: the money multiplier

First, unconventional measures do not automatically lead to an increase in…