Banque de France Bulletin no. 235: Article 3 The cash industry in the midst of the Covid-19 crisis

Developments in the cash industry have been marked in recent years by fundamental trends, such as the rapid dematerialisation of payment instruments and the expansion of e-commerce. These trends have resulted in a decline in the use of cash, and hence in the volumes processed by the cash industry as a whole. Paradoxically, the demand for banknotes, driven by non-transactional needs, has never been higher. The health crisis has accentuated these developments, acting as a catalyst for changes in behaviour. In this context, the Banque de France, as the guarantor of citizens’ freedom to choose their means of payment, constantly strives to preserve the ease of access to and acceptance of cash, in accordance with the National Cash Management Policy that it launched in 2019. 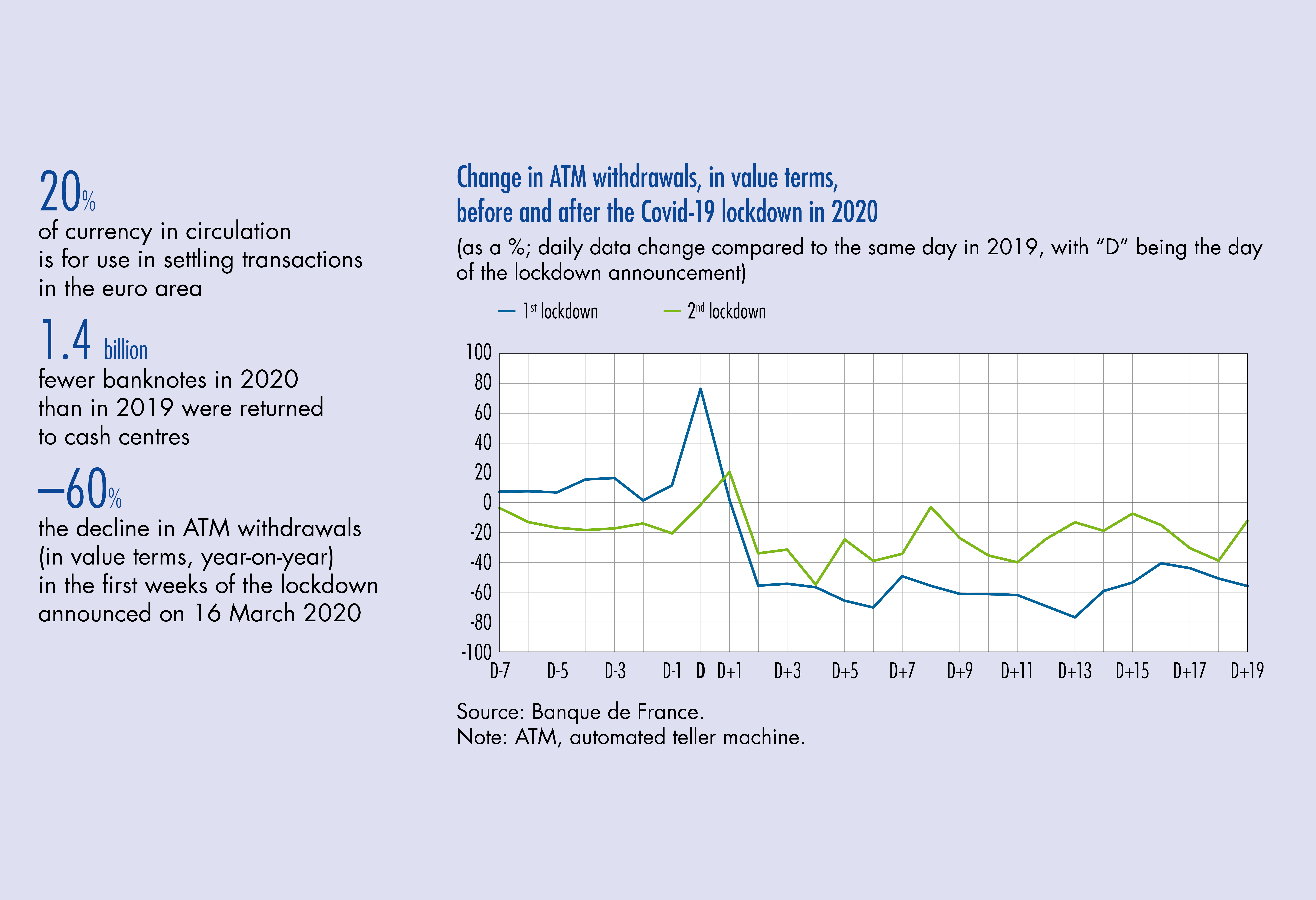 1 Trends in banknote circulation up to 2020

The use of cash as a means of payment has been declining for almost ten years. This trend can be explained in particular by the growing competition from cashless payment methods (whose share rose further with the increase in May 2020 in the contactless card payment limit from EUR 30 to EUR 50) and changes in consumption patterns (in particular the development of online purchases). According to the latest survey on the use of cash by households in the euro area, conducted in 2019 2020 by the European Central Bank (ECB), while cash still accounts for the bulk of point of sale (POS) and person to person (P2P) transactions in the Eurosystem and in France in volume terms, its share is declining both in volume and in value terms (see table).

The dematerialisation of payment instruments has accelerated over the last five years. Before 2010, card payments were 2.7 times higher than ATM withdrawals, which are a good indicator of cash payments (see Chart 1). This ratio, which still stood at 3.1 in 2014, rose to 4.3 in 2019. In 2020, with the sharp decline in ATM withdrawals, it increased to around 5. The increase is less marked for card payments in point of sale (POS) outlets alone, with the ratio rising from 3 to 3.7 over the 2014 2019 period and then to 4.2 in 2020. The stronger growth in the first ratio can be attributed to e commerce, which is taken into account in the first calculation of the card payment, and which is growing particularly fast.

As a result, the volume of banknotes flowing from the public to the cash industry is steadily decreasing. In particular, cash deposits by banks and other players at Banque de France counters have been declining for a decade. These payments decreased by 250 million banknotes per year in the years 2014 2016 and by 500 million banknotes per year in the years 2017 2019, reducing the level of inflows from more than 7 billion banknotes in the early 2010s (peak) to about 4.6 billion in 2019. With the health crisis, this decline became even more pronounced in 2020 (–1.1 billion banknotes), bringing the level of inflows to an all time low of 3.5 billion banknotes (see section 2). To a lesser extent, coins followed the same long term trend as banknotes, with inflows to Banque de France counters continuing to fall.

However, the decline in …

publication
Banque de France Bulletin no. 235: The cash industry in the midst of the Covid-19 crisis
Download (EN)
Means of payment and currency in circulation