Banque de France Bulletin no. 235: Article 2 Is there a need for greater banking consolidation in France and Europe?

In an environment of persistently low interest rates and low profitability, coupled with the impact of the health crisis, the European banking sector is facing many challenges, some of which may be partly related to overcapacity issues. Since 2009, mergers and acquisitions have slowed down in Europe, following the many deals made in response to the 2008 financial crisis. This article analyses the links between bank concentration and financial stability. It provides an overview of bank concentration in France and Europe and compares it to that observed in the United States. Finally, it highlights the importance of completing the European Banking Union to foster consolidation and contribute to enhancing the profitability of the European banking sector in the face of international competition and the emergence of new players in the era of digital transformation. 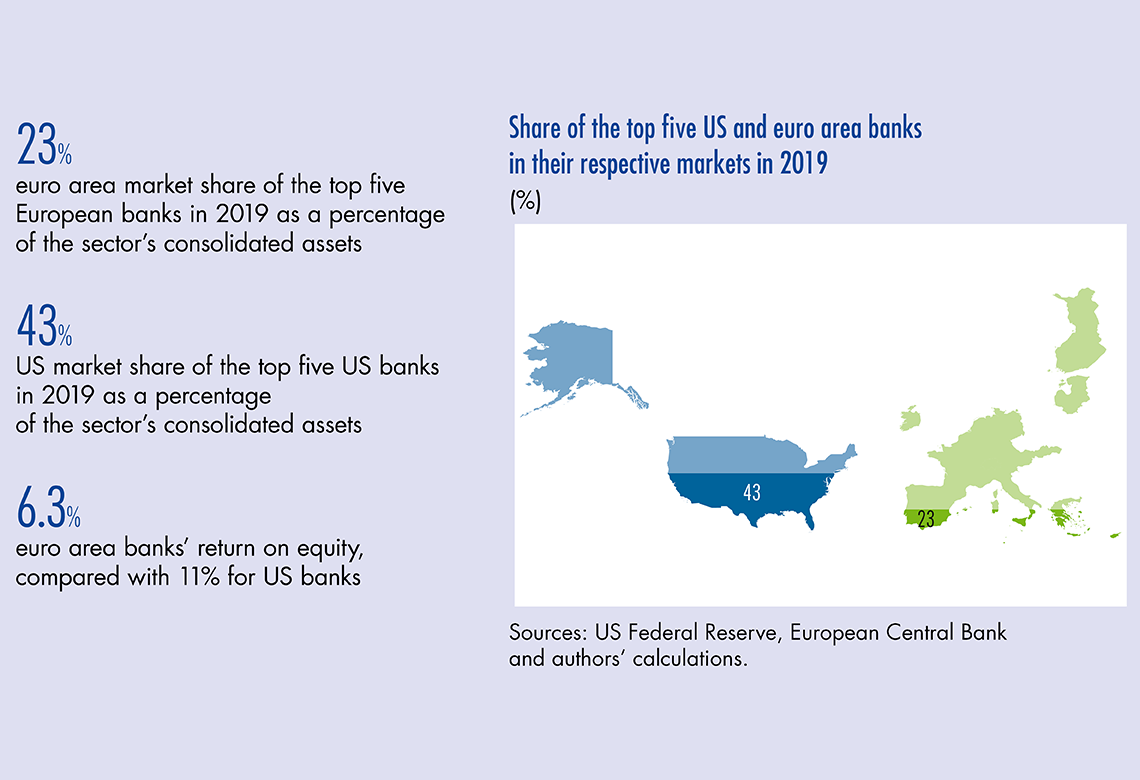 The economic impact of financial crises can be particularly strong: in the aftermath of the 2008 financial crisis, the intervention costs for banks in 25 Organisation for Economic Co operation and Development (OECD) countries included in the study were estimated at just over 7% of the gross domestic product (GDP) of these countries on average over the 2008 2014 period (Grimaldi, Hofmeister, Schich, and Snethlage, 2016). The wave of bank concentration in the 1990s (observed at a global level) had raised the question of the impact of banking consolidations on risk taking and financial stability (Group of Ten, 2001). The 2008 financial crisis further illustrated the need for greater resilience of the banking sector, while highlighting the risks associated with the presence of “too big to fail” institutions.

From a theoretical point of view, the relationship between bank concentration and financial crises is ambivalent and two opposing schools of thought have emerged in academic literature.

Boyd and De Nicolò (2005) establish a negative causality between competition and risk taking: in a more concentrated system, banks tend to take greater risks. Indeed, while increased bank concentration may yield benefits, notably in terms of diversification (especially geographic), cost reduction and productivity gains (see below), it is also accompanied by less competition, which can lead to higher risk asset portfolios. The increase in risky exposures in banks’ balance sheets may be linked to an increase in borrowers’ risk, as they are faced with higher interest rates in a less competitive market, or to less selective control over the granting of credit, as the dominant banks have less incentives to ration credit given the associated monitoring costs. This exposes them more to aggregate risk, ultimately weakening their balance sheets and increasing their probability of default (Caminal and Matutes, 2002). In addition, when banking systems are concentrated in too few groups, they may become so large, complex, and interconnected that their disorderly failures trigger other failures by contagion effect and cause lasting damage to the financial system and the real economy.

In the absence of appropriate resolution and safeguard mechanisms, governments could therefore be forced to intervene and carry out a direct rescue by mobilising public funds (bail out) in order to prevent any negative effects on the rest of the financial system and on the real economy. This is the case for…

publication
Banque de France Bulletin no. 235: Is there a need for greater banking consolidation in France and Europe?
Download (EN)
Financial stability and financial system