Convergence trading, especially arbitrage, is used on a large scale by investment banks and hedge funds, and contributes to the smooth integration of financial markets. However, it is also a source of systemic risk, as the transactions involve short-term debt that can be cut off by the creditor in times of market stress. In this case, arbitrageurs are forced to rapidly unwind their positions, leading to abnormal falls and divergences in asset prices. This risk materialised in the US Treasury market during the crises of 1998 – with the collapse of the hedge fund Long Term Capital Management (LTCM) – and of 2008, but ultimately proved contained in the 2020 health crisis. The intervention or non-intervention in the market of the US Federal Reserve can be linked to the severity of the financial crises. 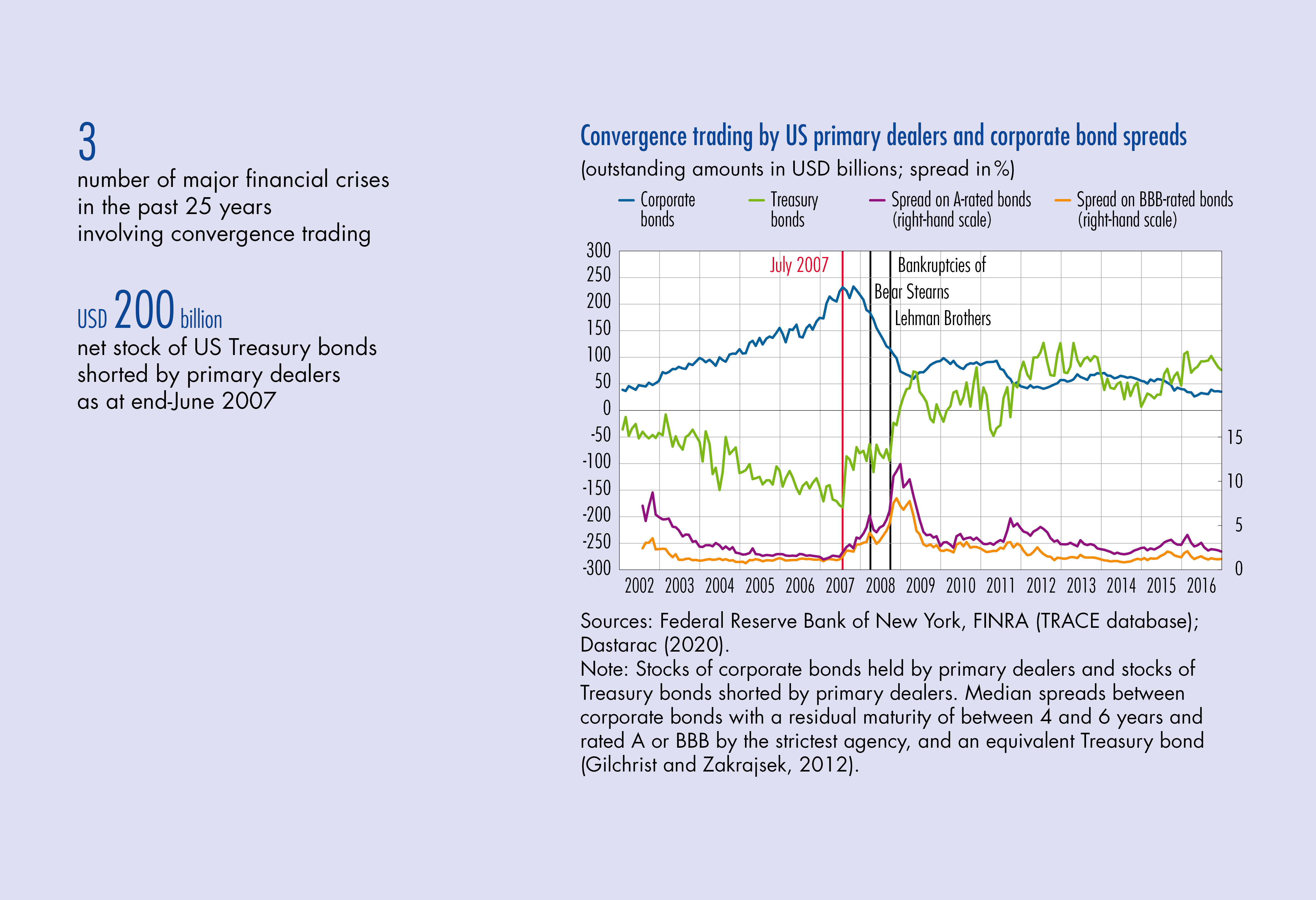 1 What are convergence trading and arbitrage?

Convergence trading consists in exploiting the difference between two asset prices in the expectation that they will converge over the short or medium term. The strategy is mainly used by investment banks and hedge funds. Another term for convergence trading is relative value trading or pairs trading.

When the two assets involved are almost identical, the practice is known as arbitrage.

How do you profit from price divergences?

To illustrate, take the example of two bonds from the same issuer, with similar maturities and equivalent contract terms (same seniority, option for early redemption by the issuer, same coupon, etc.). The strategy consists first in buying the cheaper bond, which we shall call A, and short selling the more expensive bond, called B; short selling a bond means borrowing it from an investor and selling it onwards in the market. In the second step of the strategy, bond A is sold and bond B is bought back in order to return it to its owner.

In general, convergence trading can be just as risky as gambling on whether the price of any asset will rise or fall. In the case of arbitrage, bonds A and B are almost identical. An investor looking to buy one of the bonds will most likely choose the cheaper one, causing its price to rise. The prices of the two bonds should thus converge over time and the risk should remain limited; however, the price divergences and potential profits in this case are small. In order to generate acceptable returns for the shareholder, arbitrageurs sometimes have to use massive leverage, which creates substantial risks (see below).

Launched in 1994, the hedge fund Long Term Capital Management (LTCM) used arbitrage to exploit the divergence between recently issued (on the run) US Treasury bonds, which are more liquid and more expensive, and those issued a few months
earlier (off the run), which are less liquid and cheaper. LTCM shorted on the run securities and went…