Banque de France Bulletin no. 235: Article 6 How have French exports fared as regards price and cost competitiveness since the start of the 2000s? 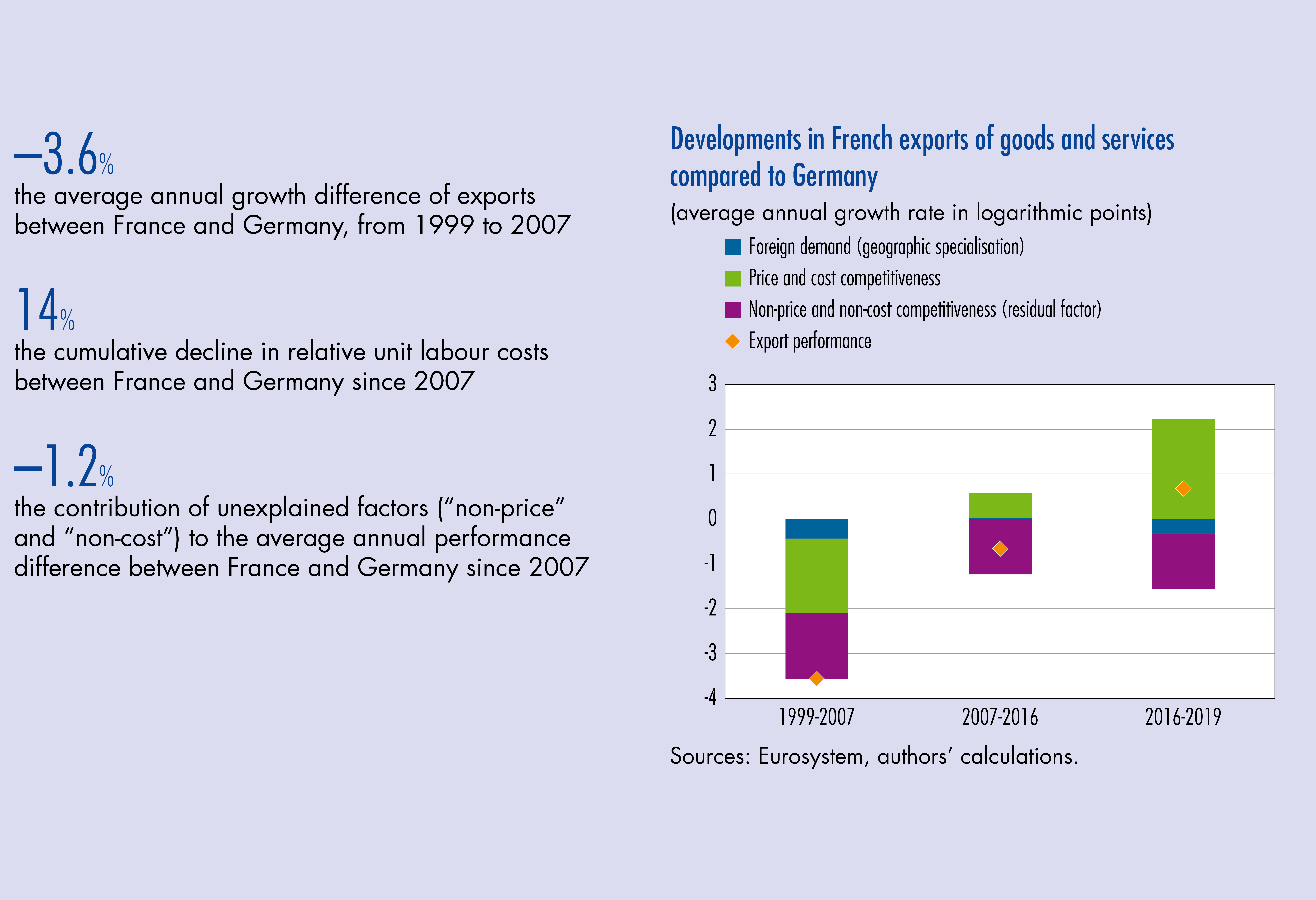 After a marked deterioration between the start of the 2000s and the great financial crisis of 2008-10, France’s market share for exports of goods and services has stabilised since 2010 (see Chart 1). Indeed, the macroeconomic “performance” of French exports, measured by the ratio of exports (in value or volume) relative to foreign demand, stabilised at the end of the financial crisis. This trend break also occurred in Italy and Spain, which experienced significant nominal adjustments at the height of the sovereign debt crisis.

In 2019, just before the pandemic, France was in the process of recovering export market share, whereas Germany’s export performance decreasing due in part to temporary difficulties in the automotive sector.

The Covid 19 crisis had a major impact on French exports in 2020. The deterioration in export performance was mainly due to unfavourable specialisation, with the significant share of the aeronautical sector (see Berthou and Gaulier, 2021). Similarly, travel restrictions significantly weakened French exports of services. In Spain, the highly unfavourable export performance in 2020 also resulted from the collapse in demand for travel, which is not reflected in the foreign demand indicator.

The year 2020 was atypical in terms of the role of sectoral specialisation, since global demand in the aeronautics sector generally used to favour French exports. Overall, France’s specialisation proved to be an asset as of the mid-2000s, even relative to Germany (see Gaulier et al., 2013 – Table 3, updated in Bas et al., 2015). The growth of travel in international trade also benefited France, albeit to a lesser extent given the significant regional specialisation in this sector (less dynamic European markets – see Camatte and Gaulier, 2018). Lastly, services excluding travel were a growth driver for France’s foreign trade between 2000 and 2019 (see Bui Quang and Gigout, 2021).

2 France’s cost competitiveness has improved since 2008

publication
Banque de France Bulletin no. 235: How have French exports fared as regards price and cost competitiveness since the start of the 2000s?
Download (EN)
Economy and international financing