By Torre Ghjuvanni, Laplace Emmanuelle
Thematic: Means of payment and currency in circulation

Demand for euro banknotes and coins remains robust, buoyed by circulation in non-euro area countries and the hoarding of cash as a store of value. Nevertheless, the use of cash as a means of payment is in decline due to rising competition from cashless payment instruments and changing patterns of consumption.

The Banque de France remains the central player in the French cash cycle. It manufactures euro banknotes (795.4 million notes in 2018), puts banknotes and coins into circulation in metropolitan France, and maintains the quality of those in issuance. In the French overseas departments and collectivities that have the euro as their currency, these tasks are performed by the Institut d’émission des départements d’outre-mer (IEDOM – the French overseas departments’ note-issuing bank). 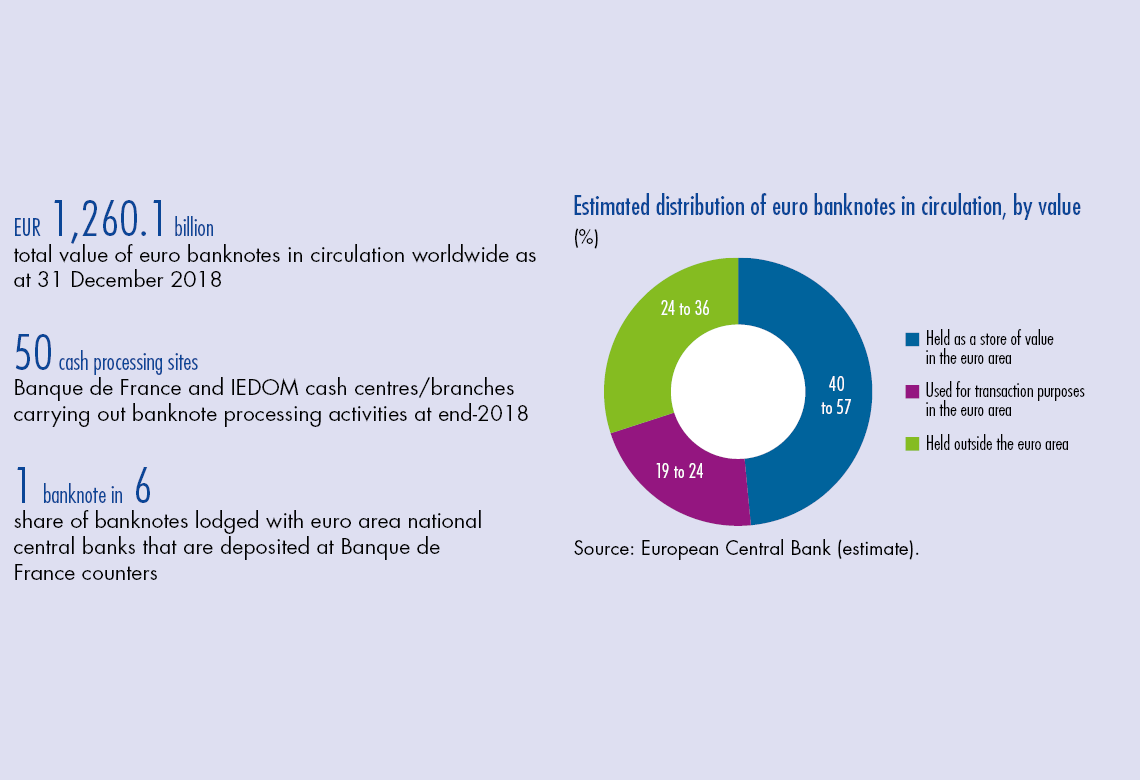 1 Robust demand in the Eurosystem and France, buoyed by non-euro area countries and cash hoarding

In 2018, the Eurosystem continued to register strong demand for euro banknotes and coins: the total amount of cash in circulation (notes and coins combined) rose by 5.1%, reaching EUR 1,260.1 billion at the end of the year (see Chart 1). The value of banknotes in circulation increased by 5.2% to EUR 1,231.1 billion, while the total value of coins rose by 3.6% to EUR 29.0 billion.

The value of euro currency in circulation thus increased at a faster pace than nominal euro area GDP in 2018. This phenomenon, which has been observed consistently since the fiduciary euro was launched in 2002, suggests that the rise in currency in circulation cannot be attributed solely to demand for transaction purposes (i.e. for the payment of goods and services in the euro area). Indeed, the payment instrument market is currently marked by the emergence of alternatives forms of payment to cash and by a shift in patterns of consumption (rise of online shopping). As well as being used as a means of payment, euro banknotes, and especially those with a high face value, are also held by European households as a store of value. In addition, there is an increasing demand for euro notes from outside the euro area.

The structure of demand

The use of cash as a store of value, which is particularly significant in periods of economic or political uncertainty (such as the bankruptcy of Lehman Brothers in September 2008 and the political uncertainties in Greece at the start of 2015), was confirmed by the 2016 survey conducted by the European Central Bank (ECB) on the use of cash by households in the euro area. Nearly 24% of European respondents said they held cash outside their bank account as a form of precautionary reserve or savings.

Euro banknotes and coins are also used outside the euro area, as evidenced by the demand from non-European central banks and from wholesale banks acting as intermediaries for non-euro area commercial banks and bureaux de change.

According to ECB estimates, between 19% and 24% of the euro banknotes in circulation, by value, are used for transaction purposes, while 24-36% are held as reserves outside the euro area. This suggests that between 40% and 57% are potentially kept as a store of value within the euro area. …

publication
Banque de France Bulletin no. 225: The circulation of euro banknotes and coins in 2018: robust growth driven by non-euro area countries and cash hoarding
Download (EN)
Means of payment and currency in circulation